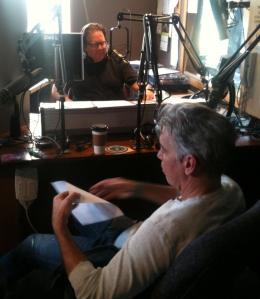 Tim Finn, is originally from Youngstown, New York. He graduated with his Masters of Arts, in Journalism from the University of Kansas in 1986. He did his undergraduate at the University of Missouri in Columbia. Tim is the music writer of the Kansas City Star. Tim joined us to talk about The Year in Music.

Back To Rockville, Tim Finn’s Music blog of The Kansas City Star, is where you can find reviews of many of the shows in Kansas City, links to many music venues, publications and broadcasting companies. More info at: backtorockville.com

4. Thee Oh Sees – “Crushed Grass”
from: Carrion Crawler – The Dream / In The Red Records / Nov. 8, 2011
[From San Francisco. It began as an outlet for John Dwyer to release his instrumental, experimental home recordings, and over the course of several albums evolved into a full band.]

We talked with Tim Finn about several area bands who given us a single or leaked a few demo tracks. We looking forward to new releases in 2012: Hearts of Darkness, Dead Voices, The Grisly Hand, The Caves, The Brannock Device, The Pedaljets, American Catastrophe, Ghosty, and In The Pines

5. David Kilgour and the Heavy Eights – “I’ll Climb Back Up That Hill”
from: Left By Soft / Merge Records / April 26, 2011
[8th album from former leader of legendary New Zealand band, the Clean.]

6. Tom Waits – “Chicago”
from: Bad As Me / Anti Records / October 21, 2011
[17th studio album and Waits’ first album consisting completely of new material in seven years since Real Gone (2004). Waits’ label, ANTI-, recently agreed on a distribution deal with Warner Music Group allowing them to release the album internationally. This marks Waits’ first release through the Warner organization since Heartattack and Vine (1980). Upon its release, Bad as Me received widespread critical acclaim.]

Coleen Shaw-Voeks is originally from Colorado and has been working in record stores for over 15 years. She was formerly the owner of Need More Discs with her husband, musician Erik Voeks. Need More Discs operated for 6 years in Shawnee, Kansas before closing in August of 2009. Coleen is currently the manager at Vinyl Renaissance on West 39th Street in Kansas City. Coleen is also a distance runner and a running coach and prefers to spend her free time running through the woods.

Five of Coleen’s Favorite Releases of 2011:

9. Glen Campbell – “Ghost On The Canvas”
from: Ghost On The Canvas / Surf Dog Records / August 20, 2011
[Intended as his farewell to studio recording due to his diagnosis of Alzheimer’s disease. The album’s creation was made public in March 2010,but Campbell and his wife delayed informing the public about his illness until shortly before he embarked on the Glen Campbell Goodbye Tour. The duo decided to go public so fans of his would not be confused if the performer flubbed his lines or seemed erratic onstage.]

10. Dirty Projectors & Bjork – “On and Ever Onward”
from: Mount Wittenberg Orca / Domino Records / October 24, 2011
[In 2009, Björk and Dirty Projectors, were asked to perform a charity concert of seven songs written just for the occasion. A year later they recorded the songs and released a digital-only format. Now over two years later, the recording was released on CD and vinyl, by Domino Records. All proceeds from the digital sales at mountwittenbergorca.com go to the National Geographic Society for the project of creating international marine protected areas. Mount Wittenberg is located at Point Reyes National Seashore in California. The inspiration for the EP came when Amber Coffman of Dirty Projectors saw a pod of whales off the coast while hiking at that spot.]

11. King Creosote & John Hopkins – “Bubble”
from: Diamond Mine / Domino / March 28, 2011
[Nominated for the Mercury Prize King Creosote,is the stage name for Kenny Anderson, an independent singer-songwriter from Fife, Scotland, who has released over 40 albums. Anderson is also a member of Scottish-Canadian band, The Burns Unit.] 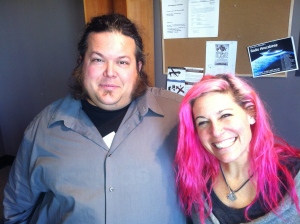 Chris Haghirian has worked for The Kansas City Star for 12 years and helped launch INK in April of 2008. Chris works on the marketing side of INK and puts together all of the music promotions. Chris was instrumental in the organization of The Middle of The Map Festival, Midcoast cares: A Benefit for Joplin, The past two years of MidCoast Takeover SXSW Music festivals featuring KC and Lawrence area bands. To date, He has seen 634 bands live and has been to 346 shows. Chris also is a regular contributor to The Mailbox, a weekly podcast radio show produced and hosted by Michael Byars that is available at the Midwest Music Foundation’s website: midwestmusicfound.org.

Chris is looking forward to the new albums in 2012 from:
Making Movies – in studio in FEB
Quiet Corral
Thee Water MoccaSins
Spirit is the Spirit

With INK Chris will be working on:
The Middle of the Map Festival
The Local Music Showcase with The Royals and Plaza Art Fair
And other new projects

Marion Merritt is the creator of the blog: a2-m3.com a site that gives visitors a wealth of information on new CD, Vinyl, and DVD releases. Marion also shares the latest news on: Theatres, Bookstores, and Art Galleries. The site features links, downloads, and articles to keep us current with all the latest releases and arts news. Marion is also the manager of the music department at Barnes & Noble on The Plaza. Marion has been joining us on Wednesday MidDay Medley for over 7 years, once a quarter, to place her newest music discoveries and information from her musically encyclopedic Brain.

19. Wild Flag -“Romance”
from: Wild Flag / Merge / Sept. 21, 2011
[2nd single from the debut of the four-piece super group, of sorts, based in Portland, Oregon and Washington, D.C. that consists of Carrie Brownstein (formerly of Sleater-Kinney), Mary Timony (formerly of Helium), Rebecca Cole (formerly of The Minders) and Janet Weiss (formerly of Quasi and Sleater-Kinney). The band recently played the Record bar on Oct. 5.]
11:57