2. Julia Holter – “Feel You”
from: Have You In My Wilderness / Domino Records / September 25, 2015
[4th studio album from 32 year old Julia Holter who has been compared to: Laurie Anderson, Julianna Barwick, Kate Bush, Joanna Newsom, and Stereolab. Her father once performed with Pete Seeger. Her mother, Carole Shammas, is a prominent academic and currently holds the John R. Hubbard Chair in History at the University of Southern California. Besides playing and recording music, Holter tutors students and works with a nonprofit organization for teenagers in South Central Los Angeles. A graduate of CalArts, where she studied composition, Holter released her debut studio album, Tragedy, in August 2011.]

[RTL play KC Psych Fest, Friday, October 2, at recordBar, with Merlin, The Philistines, Crushed Out (from Brooklyn), Holy Gallows (from Memphis), and Via Luna.]

[Via Luna play KC Psych Fest, Fri Oct 2, at recordBar, with Merlin, The Philistines, Crushed Out (from Brooklyn), Holy Gallows (from Memphis), and RLT.] [Via Luna play Records With Merritt, October 5.] 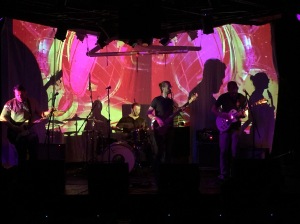 7. The Philistines – “Heart Like Candy”
from: How To Keep Dreaming / The Record Machine / Sept. 10, 2015
[A new compilation series from The Record Machine with proceeds benefiting Midwest Music Foundation. HowToKeepDreaming.com. The song is from forthcoming debut LP that The Philistines will release in spring of 2016. KC based rock ‘n roll/pop band with a psychedelic bent, made up of: Kimberley Queen on lead vocals; Cody Wyoming on lead guitar and vocals; Rod Peal on guitar; Michelle Bacon on bass; Josh Mobley on keyboard, Steve Gardels on drums. Recorded and mixed with Paul Malinowski at Massive Sound, mastered by Dave Gaume.]

[The Philistines play KC Psych Fest, Friday, October 2, at recordBar, with Merlin, RLT, Crushed Out (from Brooklyn), Holy Gallows (from Memphis), and Via Luna.] 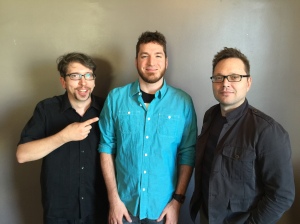 Brenton Cook formed Kansas City independent record label Haymaker Records in January 2014. Brenton also works as a computer programmer and is web administrator for the Midwest Music Foundation where is the curator of the Midwestern Audio compilation series, volumes 1 through 3.

Dedric Moore is a musician, songwriter, producer, organizer, husband, father, and member of the bands Monta At Odds, and Mysterious Clouds. Dedric Moore is also the founder KC Psych Fest.

Brodie Rush is the brainchild behind Be/Non, a Kansas City band that has been making music for over 20 years. Brodie is currently featured in The Pitch, and Be/Non is getting ready to release their 6th album, Mystic Sunrise / Sunset Magic, on Haymaker Records.

Brenton, Dedric, and Brodie joined us to talk about the 4th Annual KC Psych Fest, Friday and Saturday, October 2 & 3, at recordBar, 1020 Westport Rd, as part of recordBar’s 10th Anniversary celebration.

Night One, Oct. 2 features:
Merlin, The Philistines, Crushed Out (from Brooklyn), Holy Gallows (from Memphis), Via Luna, and RLT. 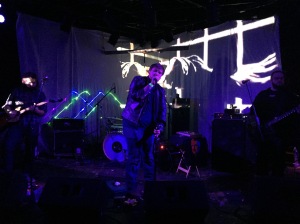 [Crushed Out play KC Psych Fest, Friday, October 2, at recordBar, with Merlin, RLT, The Philistines, Holy Gallows (from Memphis), and Via Luna.] 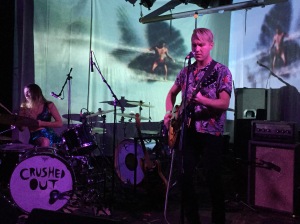 10. The Van Allen Belt – “One On The Board”
from: Heaven On A Branch / Independent / September 26, 2014
[Pitsburgh based 4-piece band. The second installment of a three album series beginning with the debut “Meal Ticket To Purgatory”. Home recorded in 2 living rooms and 1 bedroom roughly between 2012 and 2014. Best sound quality will be delivered when listening through stereo. All songs written and produced by Benjamin Ferris. Mastered by Scott Taylor. © 2014. Benjamin Ferris on guitar, keys, samples, & vocals; Tamar Kamin on vocals; Scott Taylor on turntables, effects processes, & drums; and Tom Altes on bass.]

11. Slim Twig – “Fadeout Killer”
from: Thank You For Stickin’ With Twig / Independent / Auust 7, 2015
[5th album by the Toronto based songwriter and producer. Twig has released these previous records among a swath of EP’s, singles and one-offs, displaying in the process a complete disregard for genre or consistency.Thank You For Stickin’ With Twig is to date the most sonically immersive album in Twig’s discography. Where some records have focused explicitly on sample-based songwriting, while others have been completely live- recorded, the new album arrives at a perfectly produced fusion of fidelities. It hovers, glamorously caught between a cloud of obscurant, half-speed tape hiss, and the most stoned Jeff Lynne production you’ve ever heard. Twig flirts here with a variety of vibes, most often opting for a three dimensional approach whereby a warped tape aura is overlaid with colourful, laser-cut keyboard and guitar melodies. A fetishization of analogue texture is married to a digital approach. All the while, we find Twig irreverently raiding classic rock of its symbolism, sexuality, and social ambition for ulterior subversions.]

13. Metric – “The Shade”
from: Pagans in Vegas / Crystal Math Music / September 18, 2015
[6th album from Canadian rock band founded in 1998 in Toronto. The band consists of Emily Haines on lead vocals, synthesizers, guitar, tambourine, harmonica, piano; James Shaw on guitar, synthesizers, theremin, backing vocals; Joshua Winstead on bass, synthesizers, backing vocals; and Joules Scott-Key on drums & percussion. The band started in 1998 as a duo formed by Haines and Shaw with the name “Mainstream”. After releasing an EP titled Mainstream EP, they changed the band’s name to Metric, after a sound that was programmed by Shaw on his keyboard. In 2001, Winstead and Scott-Key joined them. .]

15. Iris DeMent – “From an Airplane”
from: The Trackless Woods / FlariElla / August 7, 2015
[6th studio album from Grammy nominated Iris DeMent who NPR said was considered ”one of the great voices in contemporary popular music.” The Trackless Woods sets 18 poems by acclaimed 20th century Russian poet Anna Akhmatova to life. Hailed as one of Russia’s finest poets, Akhmatova survived the Bolshevik Revolution, both World Wars and Stalin. She lost family, friends and fellow writers to political killings and labor in the gulags. When Iris randomly stumbled upon Akhmatova’s work in a book of poetry a friend sent as a gift, she was immediately taken by the sorrow and burden of the poems, juxtaposed with Akhmatova’s lightness and transcendence in the face of inhumanity. ”Anna’s gift of song is so strong, about alI I had to do was get really quiet and listen,” says Iris. After reading that first poem the melodies began pouring out of her, and before she even fully understood what was driving her, Iris was gathering musicians and friends, including co-producer Richard Bennett (Emmylou Harris, Neil Diamond, Steve Earle), to record ‘The Trackless Woods’ in her living room over a five-day period. The result is a breathtaking pairing of piano and voice in Iris’ style with timeless melodies that are deeply rooted in the American South. The project also fulfilled a long yearned-for desire to connect with her adopted daughter’s culture and history. Iris and her husband Greg Brown adopted their daughter from Siberia in 2005, when she was 6, and she says ”I’d never have made this record were it not for her.”]

Nathan Reusch of The Record Machine and Jonathan Bender of Recommended Daily, on the Sept 30, 2015 Wednesday MidDay Medley

Jonathan Bender’s website Recommended Daily is a Kansas City publication focused on the local eating, cooking and growing scene. It’s the only food group you need. More info at: http://www.recommendeddaily.co

The Recommended Daily was launched in KC in 2013, for readers who want to find the latest places to eat and what is on the menu, with stories about the people in the KC food scene.

Jonathan told us: “The goal for us was to integrate the music into the festival by placing it under the Ice Rink tent with the artist & food pavilion. I want you to have a local beer in hand and a bag of popcorn from KC while you listen to local acts. We’re also having whiskey and wine tastings (Dark Horse Distillery & Amigoni Urban Winery) as well as a Cookies & Beer garden featuring Dolce Bakery’s cookies and Boulevard Beer. ”

Parking is available in the Crown Center lots on the East and West Side of Grand Boulevard.

For Event & Ticket Information you can visit: http://www.craftkansascity.com

The Record Machine curated music for The Ink Stage

17. Pink Royal – “Don’t Bring It On Me”
from: Taps / Silly Goose Records / April 11, 2015
[Alt-electro-rock-pop from Pink Royal, based out of Lawrence, Kansas, was the brainchild of guitarist Steven LaCour. Following a brief stint with an alternate line up, LaCour recruited local musicians Dylan Guthrie on vocals, Nick Carswell on bass guitar & keyboards, and Alex Hartmann on drums. Pink Royal as we know it was born. With the additions guitarist Josh Dorrell, of Lawrence’s Alien Jones, and saxophonist, keyboard player Zak Pischnotte, right out of KU’s music performance doctorate program. ]

18. Heidi Lynne Gluck – “The Only Girl in the Room”
from: The Only Girl in the Room – EP / Lotuspool Records / April 28, 2015
[Debut solo release from Lawrence, Kamsas based Heidi Lynne Gluck is a songwriter, singer and multi-instrumentalist originally from the middle of Canada. After transplanting herself from the plains of Manitoba to the midwestern United States, Heidi quickly became an in-demand player, performing on stage and in the studio both as a solo artist and with renowned musicians including Juliana Hatfield & Some Girls, Margot & The Nuclear So and Sos, Lily & Madeleine, The Pieces, The Only Children, and others.]

Earlier in the show we played new recordings for The Philistines, and then Pink Royal, and coming up from Atlas. All of these tracks are included in a new compilation series from The Record Machine, “How To Keep Dreaming” released on September 10, 2015 , celebrating the music that is inspiring us, with proceeds benefiting Midwest Music Foundation.
More info at: http://www.HowToKeepDreaming.com.

It has been a busy year for The Record Machine, now in it’s 12th year, with Middle of The Map Fest, Film Fest, Forum, curating a stage at Crossroads Music Fest, collaborations with Intelligent Sound, the compilation, signing the band Light Music, and more.

19. Atlas – “Between”
How To Keep Dreaming / The Record Machine / September 10, 2015
[A new compilation series from The Record Machine celebrating the music that is inspiring us with proceeds benefiting Midwest Music Foundation. More info at: http://www.HowToKeepDreaming.com. Atlas released their debut album, Ten Twenty on November 21, 2014. ATLAS was formed in 2007 by 5 friends: Jonny, Dave, Nick, Josh, and Jeremy who have known each other for most of their lives. Since graduating college, music has become a common ground.]

21. Fly Golden Eagle – “Horse’s Mouth”
from: Quartz / ATO Records / May 12, 2015
[Ben Trimble was raised in Detroit but has Kentucky roots. It was in a Nashville basement that Trimble lost himself in rock ‘n’ roll. He found himself working for a music supervisor with a record collection of 60,000 releases. Ben fell down the vinyl the rabbit spindle hole. He explored: Motown, Blues, Glam rock, Psychedelia, all of the sparks of his inspiration, his musical tree of life, his Detroit roots, his need for expression, the new discovery of a musical community in Nashville. All of these ingredients, were baked together to become Fly Golden Eagle. Trimble says. “I realized that there was a long line of people who had expressed rebellion — both serious and casual — through music. They’d done so in different ways and in different parts of the country.” Joining Ben Trimble are Matt Shaw from Celeste, Texas, on bass; Mitch Jones from Knoxville, Tennessee, on the keyboards; and Richard Harper from Huntsville, Alabama, on drums rounding out this southern psychedelic sonic 4-piece. From the ban’s EPK: “Quartz is a 26-song epic, a collection of songs that join together to form a narrative arc describing a story that is sometimes vulgar, sometimes profane, and sometimes beautiful. It’s about the psychedelia found in the natural world and it’s a love story.”]

Next week on October 7, Betse Ellis and Marion Merritt join us as special guest co-hosts, as we feature some of our favorite MidCoastal Releases of the last 4 months. It is also our Fall Fund Drive show and we have some absolutely fabulous “Thank You Gifts” for this that donate during Wednesday MidDay Medley.