We featured music from 20 bands participating in the 11th annual Crossroads Music Fest, presented by Sprint, as a benefit for KKFI, on Saturday, September 12, from 6:00pm to 2:00am, featuring over 35 bands, in 7 venues, all within 2 blocks, in Kansas City’s Crossroads Arts District. We played: The Free Years, The Phantastics, The Philistines, Katy Guillen & The Girls, Duncan Burnett & The Ministry, She’s A Keeper, Mountain Sprout, Light Music, Sara Morgan, Riala, Pink Royal, Lauren Anderson, Janet The Planet, Julian Davis, Westerners, Ruddy Swain, Connor Leimer, Slow Motion Commotion, Jessica Paige, and Instant Karma. Scroll down to the bottom of the playlist for more information about Crossroads Music Fest.

2. Light Music – “Don’t Go Quietly”
from: Ocean’s Daughter / The Record Machine / August 21, 2015
[Electronic rock / psychedelic-pop / euro-house. first played then on our show on April 15. Debut album recording of Milwaukee, Wisconsin based band, founded in June 2012, with: Brendan Benham, Shae Lappen, Dan Mena, Ed Zuehlke. The band members have played together in various forms for the past decade. Written over the course of two years, Ocean’s Daughter was recorded and mixed in 2014 by acclaimed producer and engineer Beau Sorenson (Death Cab for Cutie, Bob Mould). The album is a tonal and emotional exploration into the depths of love, worship, and forgiveness. The loosely conceptual album follows the oceanic heroine Aphrodite as she travels through a saga of love in modernity, exploring from different angles the strength, power, beauty and independence she embodies unequivocally through her manifestations of love.]

3. Pink Royal – “747”
from: Taps / Silly Goose Records / April 11, 2015
[alt-electro-rock-pop from Lawrence, Kansas, with Dylan James Guthrie on vocals, Steven LaCour on guitar, Josh Dorrell on guitar, Alex Hartmann on drums, Nick Carswell on bass guitar & keyboards, and Zak Pischnotte on Saxophones. Originally founded by Henry Burling (drums), Steve LaCour and John Killeen (bass) and the addition of Chad “Mustard” Smith of the band Dumptruck Butterlips on vocals. When Henry returned to England, and Chad Smith went on the road with his other musical projects, Pink Royal journeyed through various concoctions, eventually settling on the current line up.]

5. Westerners – “Dog Days”
from: Westerners [EP] / The Record Machine / March 24, 2014
[Mitch Hewlett, Josh Hartranft, Matt Mirsch, Ben Childs. Recorded and produced at Element Recording by Joel Nanos. Members of the band come from all over: the east coast, London, Kansas City, bonded by an arbitrary move to a farmhouse in nowhere, Kansas, and an almost decade long friendship. In 2013 the band enlisting a friend and local band director who was then recently discharged from the US Coast Huard to fill out their sound. Westerners emerged on the local music scene with their high energy performances.]

6. The Philistines – “Twitch of the Death Nerve”
from: forthcoming debut LP that The Philistines [KC based rock ‘n roll/pop band with a psychedelic bent, made up of: Kimmie Queen on lead vocals; Cody Wyoming on lead guitar and vocals; Rod Peal on guitar; Michelle Bacon on bass; Josh Mobley on keyboard, Steve Gardels on drums. Recorded and mixed with Paul Malinowski at Massive Sound, mastered by Dave Gaume.]

[Katy Guillen & the Girls play Crossroads Music Festival, September 12 on the Vinyl Renassaince Stage at The Brick, 1727 McGee, at 1:15am.]

8. Lauren Anderson – “Can’t See You”
from: Truly Me / Independent / July 24, 2015
[Originally from Chicago, Lauren first started performing solo gigs around KC after completing her masters in music therapy, from University of Kansas in 2012. Lauren then formed her own band and released her debut EP “Do & Hope” in August 2014. Lauren Anderson was nameds the 2015 Female Vocalist of the Year from Midwest Music Awards.]

10. Sara Morgan – “Easy To Dream”
from: Easy To Dream EP / Independent / June 9, 2015
[KC based Singer/Songwriter, originally from McGehee, Arkansas. She plays piano, saxophone, guitar, banjo, ukulele, and piano. Sara has opened for BJ Thomas, John Michael Montgomery, John Corbett, Sean Rowe, Chuck Mead, Ben Taylor, and was the preshow at the Industry Bar inside the Uptown Theater before Loretta Lynn, took the main stage in November 2014. Ms. Lynn hosted Sara on her tour bus after Sara’s set and prior to Ms. Lynn’s performance.]

The 11th annual Crossroads Music Fest, presented by Sprint, as a benefit for KKFI, is on Saturday, September 12, from 6:00pm to 2:00am, featuring over 35 bands, in 7 venues, all within 2 blocks, in Kansas City’s Crossroads Arts District. More info at http://www.cmfkc.com.

13. Ruddy Swain – “Treasure Of Love”
from: Ruddy Swain [EP] / Independent / November 13, 2011
[Ruddy Swain is David Regnier of Dead Voices and Lauren Krum of The Grisly Hand. Originally recorded by George Jones and released as a single on Mercury Records in 1958 where it and reached No. 6 on the US country chart. Jones composed “Treasure of Love” with J. P. Richardson, better known as the Big Bopper, who also wrote Jones’ first No. 1 country hit “White Lightning.” The single’s B-side, “If I Don’t Love You (Grits Ain’t Groceries),” became a minor hit, peaking at No. 29 on the charts.]

14. Julian Davis – “Secret Garden”
from: Who Walks In When I Walk Out / Little Class Records / to be released in Fall, 2015
[15 year old Kansas State youth Flatpicking Champion, from Pittsburg, Kansas. Thanks to Jody Hendrix for sharing this pre release track that may still under go some changes. ]

16. The Free Years – “Warrior”
from: unreleased track / from the band’s SoundCloud page / 2015
[St. Louis, Missouri based three piece band formed by: Matthew James on vocals & guitar, Danny Hill on drums, and Ryan Myers on guitar & keyboards. The band is getting set to release their first full length release this fall. More info at: http://www.thefreeyears.com%5D

[The Free Years play Crossroads Music Festival, September 12 on the INK Magazine Stage at The Living Room, UPSTAIRS 1818 McGee, at 7:30pm [for The Record Machine Showcase.] 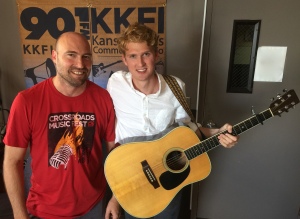 Connor Leimer grew up in a small suburb just south of KC. For years, he wrote most of his songs in his bedroom, kickstarting his career with The Telephone Takes, a live, acoustic album he recorded on his iPhone 4 and released as a freshman, before attending a summer workshop called the Grammy Project in 2013. There, he met musicians who, like Leimer, were young and eager to leave their mark. Months later, when he began recording Postcard at the Weights & Measures Soundlab studio in KC, many of those new friends joined him.