Marion Merritt joined us as our special “Guest Producer.” For more than 12 years she has been sharing her musical discoveries and information from her encyclopedic brain. Marion is the creator of Records With Merritt, a small, independent, minority owned business, at 1614 Westport Rd. in Kansas City, Missouri. Keeping alive the tradition of female-owned, independent record stores on Westport Road. Our area independent record stores make available midcoastal releases from independent KC music artists and labels, while also hosting multiple weekly in-store shows featuring area and touring bands.

Marion Merritt, Thanks for being with us on Wednesday MidDay Medley

4. Michael Kiwanuka – “Love & Hate”
from: Love & Hate / Interscope Records / July 15, 2016
[2nd studio album by London-based singer-songwriter. The album is the follow-up to Kiwanuka’s 2012 Mercury Prize-nominated album Home Again. The album was produced by Danger Mouse, Inflo, and Paul Butler. He has been compared to Bill Withers, Randy Newman, Terry Callier, and Otis Redding, as well as Van Morrison and the Temptations. In January 2012, he won the BBC’s Sound of 2012 poll.]

5. Vivien Goldman – “P. A. Dub”
from: Resolutionary (Songs 1979-1982) / Staubgold Germany / May 20, 2016
[Vivien Goldman is a British journalist, writer and musician. She was born in London, August 25, 1954, the child of two German-Jewish refugees from Nazi Germany. Goldman wrote for the music magazines NME, Sounds and Melody Maker about reggae, punk and post-punk. She was a member of The Flying Lizards, shared a flat with fellow NME journalist and The Pretenders singer Chrissie Hynde. Goldman lived in Paris for a year and a half, where she was a member of new wave duo Chantage, which gained modest fame in France. She released the “Dirty Washing EP” in 1981, with tracks produced by John Lydon and Adrian Sherwood. The EP appeared first on Ed Bahlman’s iconic 99 Records imprint on June 3, 1981. In August 1981, two of the tracks from the EP, “Launderette” and “Private Armies,” were issued as a 7″ single in the UK. Later the song “Launderette” was included on Gomma Records’ “Anti NY” compilation and the Chicks On Speed-produced Girl Monster collection. In that year she also contributed vocals (on the track “Private Armies,” which is actually “Private Armies Dub,” or “P.A. Dub,” from the EP) to the New Age Steppers’ self-titled debut.]

6. African Head Charge – “The Big Country”
from: Vision of a Psychedelic Africa / On-U-Sound / 2005
[African Head Charge is a psychedelic dub ensemble active since the early 1980s. The group was formed by percussionist Bonjo Iyabinghi Noah, and featured a revolving cast of members, including Prisoner, Crocodile, Junior Moses, Sunny Akpan, Skip McDonald, and Jah Wobble. The group released most of its albums on Adrian Sherwood’s label, On-U Sound. Journalist David Stubbs, writing in The Wire, said “The notion of African Head Charge was hatched when Adrian Sherwood read Brian Eno’s comment about his vision for a “psychedelic Africa””. ]

7. The Brian Jonestown Massacre – “Bout Des Doigts”
from: Bout Des Doigts (B-Side of “Fingertips” – Single) / A Music / June 10, 2016
[Named in tribute to the legendary Rolling Stones guitarist and his influence in introducing Eastern culture and music into the world of Western rock & roll, the Brian Jonestown Massacre formed in San Francisco, California in 1990. Some 40 different members passed through the group’s ranks over the next half-decade, but the focal point always remained singer/guitarist Anton Newcombe, who, along with bassist Matt Hollywood, guitarist Dean Taylor, organist Mara Regal, accordionist Dawn Thomas, drummer Brian Glaze, and “Spokesman for the Revolution” Joel Gion, recorded the Massacre’s 1995 shoegaze-influenced debut LP, Methodrone.]

8. Luna – “Bonnie and Clyde (Clyde Barrow Version)”
from: Penthouse / Elektra / August 8, 1995
[3rd album from dream pop/indie pop band formed in 1991 by singer/guitarist Dean Wareham after the breakup of Galaxie 500. Dean Wareham on vocals & guitars, Sean Eden on guitar, Justin Harwood on bass guitar, Stanley Demeski on drums, with guest: Laetitia Sadier on vocals for “Bonnie and Clyde”. Demeski was formerly of The Feelies and Harwood formerly of New Zealand band The Chills. The original line-up was expanded with the addition of guitarist Sean Eden for their second album, 1994’s Bewitched. Lee Wall replaced Demeski on drums in time for 1997’s Pup Tent, and Britta Phillips of The Belltower (also known as the singing voice of animated character Jem) joined when bassist Justin Harwood departed in 2000. Phillips and Wareham became romantically involved and eventually married in 2007.]

9. Britta Phillips – “Daydream”
from: Luck Or Magic / Double Feature Records / April 29, 2016
[Britta Phillips was born June 11, 1963. She is a singer-songwriter, musician, record producer, actor, and voice actor. Phillips’ music career spans more than 30 years. She came to prominence in the mid-1980s as the singing voice of the title character of the animated television series Jem. She has also been a member of the bands Luna and as one half of the duo Dean & Britta, both with her husband Dean Wareham. For a few years, on and off, Phillips has been working on Luck Or Magic, her solo debut, which started off as a collaboration with the late dance producer Scott Hardkiss. The album has five original songs and five cover songs. In 2008 Dean & Britta’s released 13 Most Beautiful Songs for Andy Warhol’s Screen Tests.]

12. Mance Lipscomb – “Shake, Shake, Mama”
from: Texas Songster / Arhoolie Records / 2016 [orig. 1960]
[Mance Lipscomb was born Beau De Glen Lipscomb on April 9, 1895, near Navasota, Texas, to an ex-slave father from Alabama and a half Native American (Choctaw) mother. He died on January 30, 1976) He was an American blues singer, guitarist and songster. As a youth he took the name of ‘Mance’ from a friend of his oldest brother Charlie (“Mance” being short for emancipation). Lipscomb spent most of his life working as a tenant farmer in Texas and was discovered and recorded by Mack McCormick and Chris Strachwitz in 1960 during the country blues revival. He released many albums of blues, ragtime, Tin Pan Alley and folk music (most of them on Strachwitz’ Arhoolie label), singing and accompanying himself on acoustic guitar. He had a “dead-thumb” finger-picking guitar technique, and an expressive voice. Lipscomb often honed his skills by playing in nearby Brenham, Texas, with a blind musician, Sam Rogers.]

13. Miles Davis & Robert Glasper – “Silence Is the Way (feat. Laura Mvula)”
from: Everything’s Beautiful / Sony Legacy / May 27, 2016
[“I didn’t want to do just a remix record,” Grammy Award-winning producer/pianist Robert Glasper said about his Miles Davis tribute album “Everything’s Beautiful.” “My idea was to show how Miles inspired people to make new art.” The album is a re-imagination of Miles Davis’ music from the perspective of the hip-hop and neo-soul generation, which sees jazz as music that is experimental nearly to the point of being genre-less. The featured artists include: Bilal, Erykah Badu, Ledisi and Stevie Wonder. Australian soul band Hiatus Kaiyote, British singer/songwriter Laura Mvula, Georgia Ann Muldrow and John Scofield join rising hip-hop stars Illa J and Phonte on the album.]

14. Bat for Lashes – “I Will Love Again”
from: The Bride / Warner Bros -WEA / July 1, 2016
[4th album from English singer, Natasha Khan who was born to an English mother, Josie, and Pakistani father, squash player Rehmat Khan on October 25, 1979. She is better known by her stage name Bat for Lashes, a singer, songwriter and multi-instrumentalist. She has released four studio albums, Fur and Gold (2006), Two Suns (2009), The Haunted Man (2012) and The Bride (2016), and received Mercury Prize nominations for Fur and Gold and Two Suns. Khan is also the vocalist for Sexwitch, a collaboration with the rock band Toy and producer Dan Carey.]

11:30 – Interview with Rachel Mallin and The Wild Type 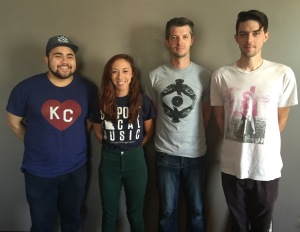 Rachel Mallin and The Wild Type play recordBar, Friday, July 29, with Pink Royal, and Spirit is The Spirit.

Rachel Mallin, Justin Walker, Jesse Bartmess, Matt Kosinski, Thanks for being with us on Wednesday MidDay Medley. (Austin Edmisten couldn’t make it.)

We fell in love with Rachel Mallin’s September 12, 2014, 4-track solo EP release, The Persistence of Vision, that she recorded during the summer of 2014, at the age of 19. Rachel Mallin wrote recorded, mixed, and produced the songs in the basement of her mom’s house in Gladstone, MO. The EP was co-mixed by Michael Kessler, and mastered by William Reeves at Centro Cellar Studio.

Just over one year ago, founder Rachel Mallin was sitting in a University of Missouri lecture hall scrambling to complete the last final exam of her sophomore year when she received a text from Justin Walker, close friend and bassist for The Wild Type. The then 20-year-old coed had spent a chaotic year taking classes, working, and composing soundtracks for indie filmmakers, while working on lyrics and music for a new band. Walker’s text announced in ALL CAPS that her recently self-produced, original song, “Razorback” was broadcasting live on an alternative radio station in her hometown, KC.

Rachel Mallin & The Wild Type also revealed a new song: “Something Wicked” on the compilation series How To Keep Dreaming Volume 1, from The Record Machine released September 10, 2015. More info at: http://www.HowToKeepDreaming.com.

Rachel Mallin’s songs “Razorback” and “Noise of the Night” were broadcast by on radio stations in Kansas City and nationally.

In 2015 Rachel formed a band called The Wild Type

Mallin’s vocals, which lazily drift alongside Edmisten’s harmonic accompaniment with charming sarcasm and quips of disdain, are a lyric & rhythmic reflection of the generational culture of collegiate discontent. In perfect complement, the sonic textures of Kosinski’s guitar arrangements and Bartmess’ atmospheric synth lines float on the surface of Walker’s soul-biased bass licks to uniquely recreate a pop-surf vibe nostalgic of 50’s/60’s doo-wop. The songs have been previewed to critical acclaim at SXSW Music Festival, Ink’s Middle of the Map Fest, and top performance venues across the Midwest.

Jesse Bartmess who also records as Sinple has been a frequent contributor to Wednesday MidDay Medley.

Rachel Mallin, Justin Walker, Jesse Bartmess, Matt Kosinski, Thanks for being with us on Wednesday MidDay Medley.

Next week, August 3, we Joshua Allen of Various Blonde joins us inner second hour, plus Promise Clutter from Revolution Records, and musician and artist Sterling Witt.