Mark Manning hosted & produced this week’s show for Mikal Shapiro and Kasey Rausch while they were away playing shows on the road, and at the SXSW Music Festival and the Midcoast Takeover in Austin, Texas. Mark played recordings from 28 musical artists he got to see, and or meet, at the 26th Annual Folk Alliance International Conference, held last month at the Westin Crown Center, in Kansas City. (More info at: http://www.folk.org)

1. Roy Book Binder – “The Good Book”
from: The Good Book / Roy Book Binder / May 1, 2013
[12th album from the guitar pickin’ hillbilly bluesman, born in Queens, New York, October 5, 1943. Binder is a veteran guitar instructor, and can often be found teaching at the Fur Peace Ranch. There he demonstrates songs, turnarounds, chord variations, right hand methods, and many of his own powerful adaptations and unique approaches to the blues.]

4. HannaLee – “Vahalla”
from: Mochella / HannaLee / May 21, 2013
[Part of a 4 EP set, released seasonal, starting in the fall of 2012, through summer of 2013, from the Seattle based trio of Fidelia Rowe, Michael Harley & Anna-Lisa Notter who wowed the Folk Alliance International Conference. Info at: http://www.hannaleesong.com]

[Beste is travelin’ with Mikal Shapiro and Kasey Rausch playing gigs in Oklahoma, and at the SXSW Music Festival in Austin, Texas.] 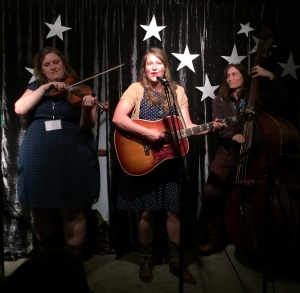 9. The Carper Family – “Would You Like to Get Some Goats?”
from: Back When / The Carper Family / August 25, 2011
[Austin, Texas based super trio. One of my favorite live performances from the Folk Alliance International Conference: Melissa Carper – bass, vocals; Beth Chrisman – fiddle, vocals; & Jenn Miori – guitar, vocals.]

11. Kasey Rausch w/ The Naughty Pines – “Alabama or Tennessee”
from: 1st single from Kasey’s upcoming solo release / Independent / 2014
[Kasey Rausch, is a Kansas City based Americana music maker and songwriter. She is also the co-host and co-producer of this radio show, River Trade Radio. Kasey is away and playing in Aistin Texas for the SXSW Music Fest and The MidCoast Takeover. Kasey is currently on the path to record her third full-length album!You can help her at: https://www.kickstarter.com/projects/1875374464/kasey-rausch-new-album 7 Days to go!]

12. Olassa – “Where Will I Live”
from: I Love You Come Back To Me / Independent / Jan. 26, 2013
[Indie Folk from Lawrence, Kansas. Allison Olassa Guitar, Accordion, Organ and Vocals; Cain Robberson on guitar and vocals; and Tyler Bachert on drums. Inspired performances.]

14. Lance Canales & The Flood – “Freedom”
rom: Elixir / Lance Canales & The Flood / April 14, 2012
[Fresno, California American trio made up of: Lance Canales, Vocals & Guitar, Chris Estep on Snare & Stomp Box, David Quinday Up Right Bass. Canales garnered a reputation as a child of being able to train wild horses and for years was forced to take his lumps in order to help his family make ends meet. It wasn’t until he confiscated an older sister’s beat up guitar and combined it with vocals he’d discovered in his mother’s fire and brimstone church that he was able to slowly carve a way out of the hard toil life with his music. While Canales may have left that life behind that life has never left his music. In 2012 Lance Canales & The Flood did the soundtrack for the documentary “Dancing the Salmon Home” which is currently being featured at film festivals across the country.] 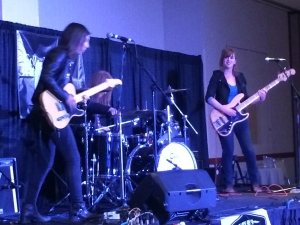 16. Jon Dee Graham – “Just Like That”
from: Garage Sale! / Freedom Records / June 26, 2012
[Jon Dee Graham is a musician, guitarist and songwriter from Austin, Texas. He was born February 28, 1959. Graham was named the Austin Musician of the Year during the South by Southwest (SXSW) music conference in 2006. He was inducted into the Austin Music Hall of Fame three times: as a solo artist in 2000, again in 2008 as a member of The Skunks, and again in 2009 as a member of the True Believers.]

17. Amy LaVere – “The Bridge”
from: This Bridge – Single / Minden Music / July 2, 2013
[Memphis, Tennessee based singer songwriter and professional actress. Her debut musical release came in 2005. She played Wanda Jackson in “Walk The Line” and Jesse in “Black Snake Moan.”]

19. Megan Burtt – “Waited for June”
from: It Ain’t Love / Independent / June 8, 2012
[Singer songwriter guitarist performer who grew up in Denver, Colorado. “I want to be remembered as someone who never took a moment for granted,” tells Burtt, “as someone who pursued an understanding of human emotion—who felt it—and related it through song.”]

21. Brewer & Shipley – “People Love Each Other”
from: One Toke Over The Line: The Best of Brewer & Shipley / Buddha Records / Aug 7, 2001
[from their 1969 release WEEDS. The duo has released 12 albums and continued to tour together, part time. At present, Michael Brewer lives outside of Branson, Missouri. Tom Shipley lives in Rolla, Missouri, where he is part of the staff of Missouri University of Science & Technology (formerly the University of Missouri – Rolla). He is manager of distance learning, video, audio, & other special video productions for the university.]

[Mikal Shapiro is down in Austin, Texas for the SXSW Music festival and the Midcoast Takeover.]

24. Sara Swenson – “Snow”
from: All Things Big and Small / Independent / 2010
[2nd full-length release from Kansas City based singer songwriter who is also a teacher, and who recently moved back to the Kansas City area after getting married and living in London. Sara’s self titled debut was released in 2008. Sara is currently getting ready to release her 3rd full length recording.]

25. Kris Delmhorst – “Pretty How Town”
from: Strange Conversation / Signature Sounds Recording / June 27, 2006
[Based on the ee cummings’s poem: “Anyone Lived in a Pretty How Town.” With her 2006 release, Strange Conversations Kris Delmhorst adapted classical and popular poems to her own original music. After this critically acclaimed album, Kris released an album of covers from the band The Cars and is currently getting ready to release a new album of new songs, many of which she performed at the Folk Alliance International.]

26. Bobby Bare, Jr. – “Shame on Me”
from: Shame On me – Single / Big Legal Mess / January 7, 2014
[Nominated for a grammy at the age of 6, for a duet with his dad called “Daddy What If,” written by Shel Silverstein. Born in Nashville, Tennessee, on June 28, 1966. He grew up in Hendersonville, Tennessee, with George Jones & Tammy Wynette as his next door neighbors. Bobby has two children and a degree in psychology from the University of Tennessee. Bobby made two albums for Immortal Records with his band Bare Jr., one for Sony Records in 1998, and one for Virgin Records in 2001. He has made 3 albums and 1 EP for Bloodshot Records since 2003, and he co-produced his Dad’s record THE MOON WAS BLUE in 2006.]

28. John Statz & Josh Harty – “World of War”
from: 12 August / Money Wolf Music / February 18, 2014
[Josh Harty is originally from North Dakota and John Statz is from Wisconsin. Recorded unrehearsed, live, with no edits, at Silo Sounds on the south side of Denver, on a free day between shows. John and Josh had played Denver the night before, and only had to drive as far as Fort Collins the next.]

Tim Finn, Music Writer for The Kansas City Star and Ink, wrote that Wednesday MidDay Medley was the “Best Place To Hear Local Music On The Radio: The place to listen to new local music and often hear performers talk about it.” (December 4, 2013)

For Kasey Rausch, Mikal Shapiro, River Trade Radio and 90.1 FM, Thanks for listening..

Sources for notes on tracks come from: artist’s websites and wikipedia.org and where noted.