[Monta At Odds who will be playing The Psychedelic Valentine’s Day Love-In with The Philistines, & DJ Thundercutz, Saturday, February 14 at 9:30pm at The Ship.]

Betse Ellis, is one of the hardest working musicians in KC, known by many as a founding member of The Wilders. Betse 2nd full-length solo release, the critically acclaimed, “High Moon Order” was one of our Best Recordings of 2013. She also recently did her 20th year at The Walnut Valley Festival in Winfield, Kansas, and is currently performing with multi instrumentalist Clarke Wyatt.

Marion Merritt is our most frequent contributors to WMM, joining us to share her musical discoveries and info from her encyclopedic brain. For 18 years Marion was the manager of the music department at Barnes & Noble on The Plaza, until she left in January 2014 to start her own independent record store, specializing in vinyl. Records With Merritt, is now open at 1614 Westport Rd. Marion Merritt was also just recently elected to The MidCoast Radio Project’s Board of Directors. Congratulations Marion.

Non-Commercial, Community Radio, means that three times a year, we interrupt our regularly scheduled programming, to ask YOU our beautiful-listeners, to help us continue 90.1 FM’s unique, 24-7 programming.

[Kasey Rausch plays with The Naughty Pines every Tuesday night at CODA. She will also play Folk Alliance International Conference, and Middle Of The Map Fest]

3. Mikal Shapiro – “This Way To Heaven”
from: The Musical / Independent / Feb 19, 2015
[This song features Betse Ellis on fiddle, and Chad Brothers and Emily Tummons on vocal harmony. Recorded, mixed and mastered by Joel Nanos at Element Studios.]

[Mikal Shapiro will premiere her new recording at Folk Alliance International Conference. She also plays with the funk/jazz quartet Royalphonic who will play Middle of The Map Fest. She also hosts/produces RIVER TRADE RADIO Sunday at 9am, on 90.1 FM.]

4. Schwervon! – “Flaming Dragonfly”
from: Broken Teeth / Haymaker Records / Sept. 30, 2014
[2 piece rock band. Nan plays drums and Matt plays guitar and they both sing. They lived in NYC for 15 years and have just relocated to KC. Schwervon! joined us live on the show on Oct 1.]

Betse Ellis played violin on two of the songs we just played. Betse has been part of the KC Music Community for nearly 25 years now, and through most of those years she has made appearances on 90.1 FM as a musician. She was the host and emcee of 90.1 FM’s Pete Seeger Tribute last year, and was the uncredited music director of Wednesday MidDay Medley’s LIVE stage version of “A Story In A Song” at the recordBar.

Elizabeth Suh Lane is the founder-Artistic Director and violinist of the Bach Aria Soloists. She has been acclaimed, “…among the finest chamber musicians in America today” by San Francisco Symphony’s Music Director Michael Tilson Thomas. She has performed across the globe as a chamber, solo and orchestral musician in the finest concert halls.

90.1 FM is “100,000 Watts of Community!!!” 90.1 FM is a grassroots movement, a radio station created by the people in the village. 38 years ago those people created a not-for-profit, 501 (c) 3 organization called, The MidCoast Radio Project and for over ten years volunteers worked to raise the funds to buy a signal, a tower, and create a physical station with studios and offices, to serve the community. In February of 1988, KKFI began broadcasting over the airwaves…

We are a rare breed. A community radio station with 100,000 watts of power sending our crystal clear signal as far 40 miles away in all directions from our tower. Our engineers tell us that when our music is playing we have about the best sounding signal you will find in the area. With recent upgrades, our new transmitter, we are sounding better as we grow, towards the future.

Paste Magazine named KKFI one of “10 Public Radio Stations You Wish Were in Your Town.” (June 4, 2014 edition)

We helped spread the news about Madisen Ward and the Mama Bear who were featured four times in 14 months on Wednesday MidDay Medley, and who wowed audiences and KKFI’s Tribute to Pete Seeger at Unity, and 90.1 FM’s Crossroads Music Fest. A few weeks later they wowed national music critics at The Americana Music Festival in Nashville and ended the year being signed to Glassnote Records and recording their first full length record in Nashville. They will be opening for Iron and Wine at The Uptown Theatre for The Middle of The Map Fest. Their debut full-length release is expected in April.

We’ve covered… The expansion of Mills Record Company (doubling their size.) The opening of Records with Merritt, 1617 Westport Road. The LIVE performances at Vinyl Renaissance on West 39th…and the comeback of vinyl. We have devoted entire shows to 7 inch local vinyl releases, and are including vinyl plays in almost all of the shows we have done in the last year.

We’ve come a long way since 1988, when those first radio shows were pre-recorded on reel to reel tape in the basement of Tom Crane’s house, and delivered to the tower site and transmitter, to be played.

Did you know, that in the late 1990s Robert Moore served as Station Manager at 90.1 FM?

Programs on 90.1 FM have been recognized for excellence from The Federation of Community Broadcasters, GLAAD, International Labor Communications Association, The Pitch Kansas City, Hear Me Out Toastmasters, KC Star, and many others.

8. The Philistines – “Stygia”
from: The Philistines EP / Independent / March 2014
[The Philistines are a KC based rock ‘n roll/pop band with a psychedelic bent, made up of: Kimberley Queen on lead vocals; Cody Wyoming on lead guitar and vocals; Rod Peal on guitar; Michelle Bacon on bass; Josh Mobley on keyboard, Steve Gardels on drums.]

[The Philistines who will be playing The Psychedelic Valentine’s Day Love-In with Monta At Odds, & DJ Thundercutz, Saturday, February 14 at 9:30pm at The Ship!!!.] [Also playing MOTM] 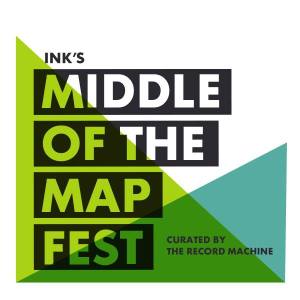 Now in it’s 5th year, Ink’s Middle of the Map Fest, curated by The Record Machine, returns to Kansas City, with an extra day, running April 22nd-25th. featuring local, national, international and emerging talent. Ink’s Middle of the Map Fest is the brainchild of Nathan Reusch of The Record Machine who joins us give us all the details about bands and artists who will be part of this year’s festival.

Wednesday, April 22 at The Uptown –
OK GO / The Republic Tigers

Eight One Sixty from 90.9 The Bridge Day Party w/ Sarah Bradshaw
(Saturday at Riot outside)

90.1 FM – Wednesday MidDay Medley KKFI Day Party w/ Mark Manning
(Sat. at Westport Saloon) with: Not A Planet, The Big Iron, The Project H, She’s A Keeper, and The Lucky

I Heart Local Music and 90.9 KJHK Day Party (Saturday at Riot inside)

The Record Machine Day Party (Saturday at the Outdoor Stage)

Ink’s Middle of the Map Fest, curated by The Record Machine, returns to Kansas City this April 22nd-23rd. More info at: http://www.middleofthemapfest.com

9. Iron & Wine – “Everyone’s Summer of 95”
from: Archive Series, Vol. No. 1 / Blue Cricket Recording / February 24, 2015
[Pulled from tapes found in the back corners of closets and dusty shoe boxes, this is the first in a series of releases – songs long neglected, but never forgotten. With the Archive Series, Sam Beam (Iron & Wine) will be gathering otherwise unreleased home recordings, covers, and live sets from his entire career and releasing them on his own label, Black Cricket Recording Co. The songs on Volume No. 1 came to life at the same time as those selected for The Creek Drank the Cradle. The songs on Creek were only 11 of the many performed and recorded by Iron & Wine at home on a 4-track cassette. While some of this material has been widely bootlegged, it has never received a widespread or proper release until now.]

Just think about what you DON’T have to hear when you are tuned to 90.1 FM KKFI! No Commercials. No automated robot playing the same 20 songs in a “rotation” based on a formula of one person, who programs the robot.

90.1 offers nearly 100 different weekly radio programs. 80 of those programs are locally produced, and hosted, and engineered, by over 100 different people, who create content, and personally handcraft each show. There are over 135 hours each week of locally produced handcrafted programs. You will not find this anywhere else on your radio dial. It is very special.

Not only do we bring the most diverse and unfiltered news and information, but our musical playlists are so very much deeper, and more comprehensive, than any other radio station in town. In one week you will hear over 2000 different songs played, as well as voices from the hundreds of KKFI volunteers and the hundreds of guests who visit our midtown studios to share their stories.

How much is this worth to you?

[Dead Voices play Davey’s Uptown Rambler’s Club in Kansas City, Saturday, February 7, at 9:00pm, with The Blackbird Revue, and My Oh My!]

Driving in your car, at the office, at the gym, in your garage, in your cubicle, in your art space, on your ipod, at your construction site, in your kitchen, in your barn, YOU can take 90.1 with you, as your companion. 90.1 FM is generally a good date. Good for a few laughs, fun to dance with, always interested in good conversation. Isn’t 90.1 FM KKFI worth a few dollars a day, or a week?

So many people tune in to kkfi.org everyday, but studies show, that less than 10 percent actually donate to keep this miracle of broadcasting alive. Your support means that you will help bring this programming to folks who could not donate at this time, for whatever the reason. Support the free-form spirit that is 90.1 FM KKFI!

12. Bloodbirds – “No Trains Coming Through”
from: Single track from: Album 2 / Independent / January 27, 2015
[The first track off the Bloodbirds 2nd full-length. The band plans, to release a new track each week.. This is phase one, “the internet phase.” Ideally these will be collected and made available as a physical release by late-spring / early-summer. KC based Psychedelic post-punk trio featuring ex-Ad Astra Per Aspera member Mike Tuley, his wife Brooke Tuley and Anna St. Louis.]

[Approach plays The MidCoast Takeover at the Shangri La, in Austin Texas.]

14. The Gorlons – “Not With My Friends”
from: The Gorlons / Independent / February 15, 2014
[Ross Taylor Murphy on Guitar/Vocals, Seth Goodwin on Keys, Geoff Green on Bass, Kenneth Wagoner on Drums, Conner Dupre Murphy on Guitar. All songs by: The Gorlons. Engineered/Mixed/Produced By: Toby Vest at High/Low Recording in Memphis TN. Mastered By: Kevin Cubbins. Additional production/aux percussion: Greg Roberson, Drums: Joe Nanez.]

Next week on February 11, Kansas Music Hall of Fame member, Kelley Hunt joins us LIVE in our 90.1 FM Studios. Kelley Hunt will play The Folly Theatre on February 14. Also with us next week LIVE in the studio we present: The Blackbird Revue.

A HUGE Thank you to Betse Ellis and Marion Merritt for co-hosting.

A big heartfelt THANK YOU to all of our fabulous listeners who called in to donate during the show! Thank you to those that pledged on-line!

You all helped Wednesday MidDay Medley go way over our goal this morning! You all gave us the support we need to continue this little ole radio show. It really means a lot and we will continue to do our best to live up to the mission of community radio with every show we do!