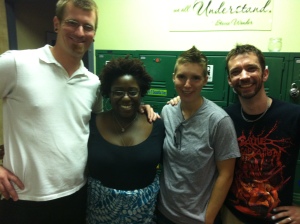 David Zey (of Ponyboy.), Crystal Boson, Megan, and Charles S. McVey (of Ponyboy.) in the Green Room in the 90.1 FM Studios after our August 8, 2012 Wednesday MidDay Medley.

2. The Smiths – “Bigmouth Strikes Again”
from: The Sound of The Smiths / Warner-Rhino / Nov. 7, 2008
[Orig. from “The Queen is Dead” – June 16, 1986]
[Former Smiths front-man Steven Patrick Morrissey has announced a new 33-date U.S. tour that kicks off Oct. 5 in Boston and wraps Dec. 8 in Atlantic City, N.J. The tour will include both his greatest hits and new, unreleased songs. Iggy and the Stooges are set to open the Nov. 24 show at L.A.’s Staples Center. Morrissy is not playing KC. The closest city is Lincoln, Nebraska at The Rococo Theatre on Nov. 1.]

3. The ACB’s – “Boy Like Me”
from: Stona Rosa / Independent / Dec. 1, 2010
[Produced by Mike Nolte at More Famouser Records. The follow up to their critically acclaimed, 2006 debut recording The ACB’s.]
[Nominated for a Pitch Music Award for Best Pop Act.]

Jesse talked about how he started making experimental, electronic music at the age of 21.

People think of electronic music as a product of the studio, but Sinple is performing live in area clubs, and he described one of his recent experiences on stage as Bliss.

Jesse Bartmess graduated from Shawnee Mission North. He is a big fan of music and big supporter of the local scene going to see 2 or 3 shows each week

[Quixotic plays Crossroads behind Grinders, this Sat, Aug. 11, w/ Emancipator, and The Floozies.]

Poet, Writer, Teacher, Scholar, Crystal Boson, is a PhD student in American Studies at the University of Kansas. Crystal holds both a B.A and M.A in English Literature, from the University of Missouri and Texas A&M University. Crystal’s new poetry collection: “The Queer Texas Prayerbook,” will be released this fall by Seven Kitchens Press, Her previous work has been published in Callaloo, Pank, the Black Bottom, and in an anthology of Queer Midwestern Writers. She also has a chapbook, “The Icarus Series’ , with Seven Kitchens Press. Crystal currently lives in Lawrence Kansas, with her Macbook, a basil plant named Lazarus and her cat, Delphina Jenkins Boson-Lease III.

Crystal Boson and Mark met while they were both participating in an event this past June at The Writer’s Place.

Texas A&M has a LGBT Student group, but Crystal explained the homophobia, and racism she encountered in College Station.

You teaches undergraduate students at the University of Kansas. Crystal talked about some of the challenges she has faced in this position.

Crystal and Mark talked about how being identified as Lesbian, Queer, African American, a Woman, these identities have historically been used to hold a person back, to deny them equality, even offer that person violence and hate.

16. Hipshot Killer – “I’ll Tell You”
from: Hipshot Killer / Locket Love Records / April 29, 2011
[Debut release from KC based 3-piece power punk band formed in the fall of 2008 by, Mike Alexander (Revolvers, Architects), on Guitar & Vocals, Chris Wagner (100 Years War, Jackie Carrol) on Bass & Vocals, Brad Wicklander (Dark Circles, Anvil Chorus), on Drums. They have recorded a 4 song EP that will be released as a 10inch this year.] [Nominated for a Pitch Music Award for Best Garage/Punk Band]

[Hipshot Killer play the recordBar this Friday, August 10 with The Architects, and Radkey.]

17. Icky Blossoms – “Stark Weather”
from: Icky Blossoms / Saddle Creek Records / July 17, 2012
[Played Granada in Lawrence Mon. w/ Washed Out] [Debut album from Omaha based 3-piece band, In this song, they play with a name: Starkweather, as in Charles Raymond Starkweather, born in Lincoln, Nebraska, the third of seven children, an American teenaged spree killer who murdered eleven people in Nebraska and Wyoming during a two-month road trip with his 14-year-old girlfriend, Caril Ann Fugate. The couple was captured on January 29, 1958. Starkweather received the death penalty, and Fugate received a life sentence on November 21, 1958. Starkweather was executed in the electric chair at the Nebraska State Penitentiary in Lincoln, Nebraska, at 12:01 a.m. on June 25, 1959. Fugate was paroled in June 1976 after serving 18 years at the Nebraska Correctional Center for Women in York, Nebraska. She settled in Lansing, Michigan, where she changed her name and worked as a janitor at a Lansing hospital. Fugate married in 2007.]

Charles S. McVey and David Zey make up the Lawrence based, grunge band, Ponyboy. Their new release is described as, “a forty-minute slugfest concerning the strange case of ‘Canadian Cannibal’ Luka Magnotta and the impact sensationalized violent crime has on our culture.” Ponyboy. plays the RecordBar Thursday, August 9, with Skinjob. Doors open at 9:00.

Charles S. McVey and David Zey’s song “Luka” is about Luka Rocco Magnotta (born Eric Clinton Kirk Newman; July 24, 1982), a Canadian pornographic actor and model accused of killing and dismembering Lin Jun, a Chinese international student, then mailing his severed limbs to the offices of Canadian political parties and to elementary schools in another province. After a video allegedly depicting the murder was posted online, Magnotta fled the country, becoming the subject of an Interpol Red Notice and prompting an international manhunt. He was apprehended on June 4, 2012, in an Internet café in Berlin while reading news stories about himself. He was previously sought by animal rights groups for allegedly making videos of himself torturing kittens and posting them online. Thus the name of their new release, “Pussy Killer.”

This was big news in May and June, and it came at the same time as the Miami Face-Eating Attack. Since then we’ve had the tragic shootings in Aurora Colorado at the Batman movie premiere, the shootings in Wisconsin at the Mosque, and Jerad Loughner pleaded guilty this week to the shootings in Arizona, that targeted Rep. Gabby Giffords.

[Mark’s footnote to the conversation: “Female Trouble” (1974) co-composed, filmed, co-edited, written, produced, and directed by John Waters, is the ultimate satire on how our culture almost celebrates, and makes famous, the super criminal, the mass murderer.

By choosing this material, Ponyboy. definitely lives up to their objective of “creating in-your-face music that deals with the darker side of life.”

Charles S. McVey wrote: “It is my attempt at creating a dialogue about the sensationalism of violence and a man’s desire for fame at any cost. The focus is not Luka Rocco Magnotta but on the madness surrounding a horrible crime.”

Charles S. McVey on bass and vocals and David Zey on drums.

Charles S. McVey talked about how his music is made by outsiders for outsiders. And sometimes he has felt outside of an outsider group.

There is a long history in Rock, and especially in Punk music, to confront the listener with darker themes, in an effort to deal with bigger problems. There is a growing Punk community in KC with a large number of Punk bands. We talked about how Ponyboy us searching for their own audience, and the reception to the new music in Lawrence.

This is their third EP as a Ponyboy. Recently the band composed music for the soundtrack to a film starring transgender, female to male, adult film star Buck Angel.

For information and to hear all of the Ponyboy recordings you can visit: ponyboymusicltd.bandcamp.com