[Kvöl play Records with Merritt, this Saturday, July 18, at 8:00 pm, with estates (from Millwaukee, Wisconsin), Churchkey (from Chicago), and KC’s Jorge Arana Trio, and Redder Moon.]

4. SOAK – “Sea Creatures”
from: Before We Forgot How To Dream / Rough Trade Records / May 29, 2015
[Debut recording from Bridie Monds-Watson, aka SOAK, an Irish singer-songwriter born in Derry, Northern Ireland, in 1997.]

5. LaBelle – “You’ve Got A Friend”
from: LaBelle / Warner Bros. / September 8, 1971
[Debut album from the funk/soul trio of: Patti LaBelle, Nona Hendryx and Sarah Dash, formerly of the four-girl group known as Patti LaBelle & The Bluebelles.]

6. enebade – “Happy Robots”
from: Enebade – EP / Independent / May 2, 2015
[Enebade is a studio project by Joshua Wiedenfeld and Beckie Trost. Recorded, mixed, and produced by Joshua Wiedenfeld, Beckie Trost, and Joel Nanos. Enebade was founded by Joshua Wiedenfeld. It is a collection of songs written over a span of over 5 years. This is the first installment of a series of EP’s to come. It was made possible through collaboration of many studio artist, and one of the most supportive music scenes in the United States. Special thanks to Joel Nanos (Element Studios) Beckie Trost (Soft Reeds) Adam McGill, Ben Grimes (Soft Reeds) Dave Gaume (Local Natives, Failure.]

7. Madisen Ward & the Mama Bear – “Daisy Jane”
from: Skeleton Crew / Glassnote Entertainment Group / May 19, 2015
[Singer songwriter, Madisen Ward graduated from William Chrisman High School in Independence, Missouri in 2007. He plays live and records with his mother, Ruth Ward, who has been playing guitar and singing for over 309 years. The duo both play guitar, with Mama Bear harmonizing with her son. Their debut EP was recorded in Kansas City’s Element Recording by Joel Nanos. Wednesday MidDay Medley was the first radio show to play Madisen Ward and the Mama Bear. They have played live on our show in 2013 and 2014, and were featured in 90.1 FM’s Tribute to Pete Seeger at Unity Temple, and The Crossroads Music Fest. They played the Americana Music Fest in Nashville, in the fall of 2014, where the national music press fell in love with their music. They were signed to Glassnote Records and after spending several months recording their new album in Nashville, they made their network television debut, Feb. 11, 2015 on The Late Show With David Letterman. They have embarked on huge tours, both in Europe and accross the United States. They played Bonaroo where they met Robert Plant. At one point during their tour the opened for the Pixies.]

Rev Gusto, is a Kansas City based, 5-piece garage pop band made up of: Jerry Frederick on vocals & guitar, Shaun Crowley on guitar & trumpet, Sam Frederick on bass and vocals, Peter Beatty on guitar & keyboard, and Quinn Hernandez on drums. Their songs are written by lead singer Jerry Frederick who studied songwriting techniques in England with the Kinks’ Ray Davies. In May 2014 the band was signed to High Dive Records. Their debut full length release, “Burnt Out Friends” was recorded at Element Recording with Joel Nanos, and will be released, July 28, 2015.

Shaun Crowley and Quinn Hernandez joined us to talk.The band has been making music for 5 years now. Last week they hosted a house concert / festival at the Shawnee Manor where all of the band have lived together. Manor Fest featured 12 bands.

Rev Gusto have opened and shared the stage with: Matt & Kim, The Mowgli’s, and The Colourists. Rev Gusto played Sony and Midcoast Takeover showcases at SXSW in 2014.

On the band’s name, Rev Gusto Jerry Frederick explained in an interview, “I used to know a priest who used to encourage people to sing with ‘reverent gusto.’ Eventually it got shortened to ‘rev,’”

The band released a self-titled EP in November 2012

In April of 2014 Rev Gusto put out their first physical release, a 7’ inch single, as part of The Too Much Rock Single Series.

Too Much Rock is a music blog site created by Sid Sowder in 1997, as a place where he could document his life as it relates to music. Sid posts his photos and videos and comments of the live music shows he attends. The site is not created as a for profit venture.

The Too Much Rock Single Series is a collection of 45 RPM singles that marry great songs with great bands all for the love of vinyl. Each old-school two-song single features one unique song pared with one cover chosen by Too Much Rock. 500 limited edition copies are pressed and given to the band, to sell as merchandise at shows and at local record stores.

In 2014 Rev Gusto was signed to High Dive Records, the label of: Ghosty, The ACB’s, Fourth of July, Shy Boys, The Gog, Arc Flash, Bummer, and others.

Full disclosure. Mark first met Rev Gusto at the Youth Volunteer Corps 4th Annual KC Metro Youth Battle of the Bands on March 27, 2010. Jerry, Sam and Quinn were in the band with, at that time, Mitch Hecht and Taylor Mc Henry. All of the members of Rev Gusto were in high school at the time. There were 13 bands in the competition. Mark was a judge with Skid Roadie from the 101 The Fox. Rev Gusto won first place! Mark invited Rev Gusto to opportunity to play on the radio. The band came on as guests of Wednesday MidDay Medley later that summer and played live on the show.

There have been a lot of comparisons of Rev Gusto’s sound to that of the sounds of mid to late sixties British invasion bands, including The Kinks. In a Sept. 4, 2013 Interview for Ink KC, Jerry Frederick told music writer Tim Finn, “Ray Davies does this songwriting class every couple of years over in England,” he said “He picks 12 people from all over the world, and for two weeks he teaches you about songwriting. I’m a big Kinks fan, so I entered some of my songs and got accepted.” “He was really encouraging,” Frederick said. “He said he really liked my songs and told me to keep working at it. So I was like, ‘OK, if you say so, Ray Davies.’”

Jerry Frederick also told music writer Tim Finn, “Instead of going out on weekends, I like to sit in my room and listen to all kinds of music,” he said. “I really like that era of music, sunshine pop and old soul.” He was also influenced, he said, by a grandmother who wrote musicals, performed on Broadway and toured Europe. “She loved Cole Porter, so I heard a lot of that growing up, too,” he said.

12. Horace GRANT – “Creeps Pretending Not To Be Creeps”
from: Only Our Cats Would Notice / Independent / July 8, 2015
[Chicago based duo. LB on drums & voice, GIB on guitar, bass, and voice. LB Briggs is also a visual artist amazing zines have been gathered into 2 compilations: It’s Alright: A Truckstop Anthology, Volume 1 and 2. available on AMAZON. More info at http://Horacegrant.bandcamp.com%5D 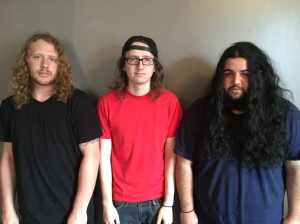 Bummer is a 3-piece band is made up of: Matt Perrin on vocals & guitar; Mike Gustafson on bass; and Sam Hutchinson on drums. The band is based in Kansas City and members grew up in Olathe, KS. Bummer likes loud rock n’ roll music and that is how they play. Formed in July 2012, Bummer has previously released two EP’s: “Young Ben Franklin” and “Milk.” Their new release, “Spank” was recorded at Westend Recording Studios by Justin Mantooth, who also mixed and co-produced the recordings with the band. “Spank” is being released digitally and on cassette, and also 10″ vinyl from High Dive Records.

“Spank” was recorded at Westend Recording Studios by Justin Mantooth, who also mixed and co-produced the recordings with the band.

“Spank” is being released digitally and on cassette, and 10″ vinyl from High Dive Records.

Bummer has had a couple years, releasing two EPs, In 2014 the band opened for Yuck at The Riot Room, recorded their own version of Gary Numan’s “Cars” playing Middle of The Map Fest and The Center of The City Fest, playing Record Store Day at Mills Record Company, as well as in stores and touring.

Origins of Bummer: The trio of Perrin, bassist Mike Gustafson and drummer Thomas Williams first came together under the name Vestibule. When Williams left the band in summer 2012, Gustafson and Perrin found another drummer, Sam Hunter, and changed the band’s name to Bummer. In April, they released “Young Ben Franklin,” a three-song EP. In July, Hunter left the band and Williams rejoined it. In October, 2012 they released “Milk,” a four-song EP. These were only averrable on digital download. In 2014 the released Milk EP on CD.

Members of Bummer told Tim Finn in an Ink Magazine article from February 18, 2014, about their influences. Mike Gustafson, 21, likes Queens of the Stone Age. “I love stuff that’s heavy & dark,” he said. “I like pop-song structures, stuff that gets stuck in your head. But it has to be heavy.” Matt Perrin, 19, admits he had a Nirvana/Kurt Cobain dependency as a young teen but has since moved on to bands like the Melvins, Unsane, Young Widows and Pissed Jeans. “Those were all turning points,” he said. “It’s all really raw, aggressive stuff.”

[estates play Records with Merritt, this Saturday, July 18, at 8:00 pm, with Kvöl (from Iceland), Churchkey (from Chicago), and KC’s Jorge Arana Trio, and Redder Moon.]

19. Shiner – “Sleep It Off”
from: Lula Divinia / Castle Face / March 11, 1997 / Reissued by Desoto in 2001
[The group formed in 1992, and quickly found wide exposure, releasing a vinyl EP in 1993 and touring with acts such as Sunny Day Real Estate, Chore, Jawbox, Season to Risk, The Jesus Lizard, and Girls Against Boys. The group released their first LP, Splay (recorded at Steve Albini’s Chicago studio) in 1996, and a second album, Lula Divinia the next year. Sub Pop took notice, and released a 7″ single of the group’s songs “Sleep it Off” and “Half Empty”. Following this the band toured with Hum in 1998. A third full-length, Starless, was released on a label run by members of Descendents, Owned and Operated, in 2000. A fourth LP, The Egg, would follow before the group broke up in 2002. This was recorded and produced at Matt Talbott’s recording studio, Great Western Record Recorders in Tolono IL. Allen Epley is in The Life and Times.]

[Shiner’s 3rd studio album, Starless, from 2000, is now available on vinyl. Shiner is on a 4-city tour playong Austin, Texas, tonight, recordBar, Friday, July 17 with The String & Return, and then on to Minneapolis and Chicago.]

[“Silver: A Noir Ballet,” features an 8-piece jazz ensemble playing 11 original compositions, with score and libretto by Christian Hankel, directed by Tara Varney, with choreography by Evan Lovelace, July 17 through 25, at the H&R Bloch City Stage in Union Station, as part of the 2015 KC Fringe Fest. More info at: http://www.silveranoirballet.com or http://www.kcfringe.org]

Next week on July 22, Brenton Cook joins us to share music and information about Haymaker Records, Summer Showcase Party, Friday, July 24, at 9:00 pm, at recordBar, 1020 Westport Rd. with Riala, HMPH, Be/Non, Schwervon!, and Jorge Arana Trio, We’ll also welcome the band The Matchsellers, who will play live in our studios. Plus our friend Jamie Rich joins us to talk about a film showing at The Tivoli Theatre.