Shades of Jade + Kodascope
+ Music from The Westport Roots Festival

2. Leon Bridges – “Better Man”
from: Coming Home / LisaSawyer Records – Columbia / Expected June 23, 2015
[Gospel and soul singer from Fort Worth, Texas who began his career by writing songs and learned guitar in order to play simple chords to accompany his lyrics. He played locally at open mic nights in the Fort Worth area while working as a dishwasher until being signed by Columbia Records in 2014. It was his song Lisa Sawyer, a soul song he wrote about his mother’s baptism in a river, that became his music style. Bridges began writing and performing 1950s and 60s style soul music that was described by Austin 360 as “a transmission straight from the heart.” Bridges’ began his first national tour in January 2015, playing shows in Texas as well as playing support for Sharon Van Etten in New York. His first official single, Coming Home was released on Columbia Records in February 2015.]

The 2015 Westport Roots Festival is Saturday, May 23, 3:00pm to 2:00am, and features over 40 bands, on six stages in Westport: The Westport Saloon, The Riot Room, The Riot Room Patio, Mills Record Company, Harling’s Upstairs, and Firefly Lounge. More info at: http://www.westportroots.com

5. Cadillac Fambe’ – “Devil’s Branch”
from: Eli’s Porch / Independent / July 29, 2011
[Kansas City’s delta darlings, Cadillac Flambé, have been breathing new life into the Americana scene with their rejuvenating tumble boogie. Rooted in the solitary country blues of Leadbelly and the urban grit of John Lee Hooker, they till in the harmony of Johnny & June Cater and combine the funk punk blues brandish of The Black Keys, conjuring up their own explicit type of roots music they like to call “Blue-Eyed Americana Psychedelic Soul.” From their humble farmhouse beginnings, husband/wife duo Kris & Havilah Bruders, drummer Mike Payne and bassist Dr. Dave Duly are bound and determined to open the sonic flood gates.]

[Cadillac Flambe’ play Westport Roots Festival, Sat. May 23 at 9:15 on the Ink Magazine stage at The Riot Room ]

[Eyelit play Westport Roots Festival, Sat. May 23 on the Four Roses Bourbon Music Showcase at The Westport Saloon at 3:00pm.] 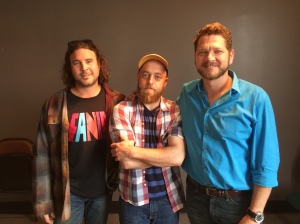 Kodascope is a six piece super group of area musicians who also play in the bands: Found A Job, Monta At Odds, Claire and The Crowded Stage, Anna Cole and the Other Lovers, The Waldo Jazz Collective, and Brutus. Formed from the ashes of the bands: Molly Picture Club and Dream Wolf, the group includes: Matthew Hayden on drums and percussion; Justin Skinner on percussion and drums; Michael Tipton on vocals and guitar; Ashleigh Guthrie on keyboards; Brent Jamison on bass; and Andy Kirk on guitar. Kodascope play a special CD Release Show, Sat, May 23, at The Brick, with Schwervon, and DJ Ser Matt.

Megan Zander (Dream Wolf, REN) and Camry Ivory (Chris Meck & The Guilty Birds) lend their amazing vocal talents to the EP on a couple tracks: “So Afraid of Losing You,” and “It’s Alright, It’s OK.”

Harnessing funk, soul, pop, and electronic influences, the band has crafted an album reflective of their energetic live performances.

The current line-up of the band started playing shows in the summer of 2014 and was well-received by dancing audiences.

Not wanting to release an album that strayed too far from that experience, the band began recording live in their West Bottoms studio in the fall. “We would basically lock ourselves in the studio and play through the songs a few times and try to capture the energy we have as a live band,” says Justin Skinner, percussionist.

Holing up a couple times a week for a month in Skinner’s studio, the band knocked out 8 eight songs for a full length album. “We are all album-lovers, so we wanted to put songs on this first release that fit together and have something in common thematically,” explains singer Mike Tipton.

The EP was mixed and produced by Skinner over the course of the winter.

In December 2014, the band released “Wind Rider” on ITunes and Spotify, along with a self-produced video.

“We wanted to get something out to show the fruits of our labor and that song shows a different side to our music than the dance stuff. It’s a pretty good tune for the winter months,” says drummer Matt Hayden.

11. Surfer Blood – “Island”
from: 1000 Palms / Joyful Noise / May 9, 2012
[Third album from critically acclaimed alternative rock band formed in 2009 in Florida, by John Paul Pitts (lead vocals/guitar), Thomas Fekete (guitar/backing vocals), and Tyler Schwarz (drums) with Kevin Williams (bass guitar/backing vocals). Original guitarist Thomas Fekete left the band in 2015 shortly after the announcement of their third album, “1000 Palms,” due to a medical diagnosis for a rare form of cancer (Sarcoma) that had spread to his lungs and spine. The band announced a fundraising effort to help alleviate Thomas’ medical bills through the site GoFundMe on April 20, 2015.]

12. The Holydrug Couple – “French Movie Theme”
from: Moonlust / Sacred Bones Records / May 12, 2013
[Devotional dream pop, neo psychedelia from Chile. All songs written, recorded and produced by Ives Sepulveda. Vocals, guitars, bass guitar, keys, noises, percussion and drums performed by Ives Sepulveda. Drums performed by Manuel Parra. Recorded at From the bed in Santiago, Chile between July and October of 2012. The Holydrug Couple are a part of the burgeoning psychedelic rock scene rising out of Chile. Based in Santiago, members Ives Sepúlveda and Manuel Parra met while “jamming” together.] 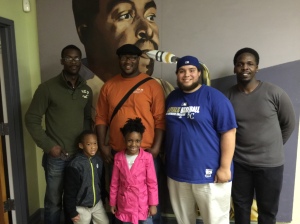 Bill Brownlee, music writer for The KC Star and creator of the influencial music blog about Jazz called Plastic Sax, writes, “Inspired by Robert Glasper and Sean Jones, Shades of Jade is at the vanguard of the burgeoning youth movement on Kansas City’s jazz scene.” The band’s critically acclaimed debut recording, Fingerprinted Memories pt. 1 was released on September 21, 2013. Band members include conservatory trained artists: Joshua Williams on trumpet and flugelhorn; Desmond Mason on Keyboards; Justin McCoy on percussion; Perry DJStix Holliday on percussion; Derrick Greenwood on bass and guitar; Dominique Sanders on bass; and Linnaia McKenzie on vocals. Shades of Jade play The Phoenix, at 302 W 8th Street, Friday, May 29. And starting in June, Shades of Jade begin a residency at Coda Bar & Grill, playing the First Saturday of each month.

Members of Shades of Jade met in school at UMKC’s Conservatory of Music. Joshua and Desmond talked about the influence of Bobby Watson.

Shades of Jade is on a constant search to paint musical pictures.

From the bands bio: Infusing specific elements of jazz, hip hop, pop, and rock into contagious soulful grooves with spurts of raw emotion Shades of Jade is on a mission to “break genre specificities and touch its listeners“.

We quoted, Bill Brownlee, music writer for The KC Star and creator of the influential music blog about Jazz called Plastic Sax, writes, “Inspired by Robert Glasper and Sean Jones, Shades of Jade is at the vanguard of the burgeoning youth movement on Kansas City’s jazz scene.”

There really is a Jazz youth movement happening in KC fostered by the UMKC Conservatory of Music, Bobby Watson, Charlotte Street Foundation

Shades of Jade is influenced by: The RH Factor, Robert Glasper Experiment, and Christian Scott Quintet.

Shades of Jade are working on a new single.

18. Shelby Lynne – “Pretend”
from: Just A Little Lovin’ / UMG Recordings / January 29, 2008
[Shelby Lynne was born Shelby Lynn Moorer, October 22, 1968, in Quantico, Virginia, the younger sister of Allison Moorer also a singer and songwriter. The success of her 1999 album I Am Shelby Lynne led to her winning the Grammy Award for Best New Artist, even though she had, by that time, been active in the music industry for some time. She released a Dusty Springfield tribute album called Just a Little Lovin’ in 2008, her tenth studio album. The album is a tribute to British singer Dusty Springfield, produced by Phil Ramone that features covers of nine songs popularized by Dusty Springfield. Three of the covers are of songs from Springfield’s debut album, while another four are of selections from Springfield’s widely acclaimed fifth album, Dusty in Memphis. Slipped in with all of the Dusty classics is “Pretend”, an original song written by Lynne.]

[Shelby Lynne plays The Folly Theatre on Friday, May 22.]

Next week on Wed, May 27, we present our annual, LGBT Pride Show – “That’s Sooo Gay”show.

Stay tuned for: ARTSPEAK RADIO, with Maria Vasquez Boyd, at noon, followed by Jazz Afternoon at 1:00 with Jeff Harshbarger. At 3:00 it’s Old G’s Hangout with Groovey Grant. At 6:00 it’s All Souls Forum At 7:00 – American Routes with Nick Spitzer. At 9:00 Dr. Mike brings us Chamber Music, followed by From Arc to Microchip at 11:30 pm. At Midnight DJ Radionic takes over the turntables.

For Wednesday MidDay Medley I’m Mark Manning. Thanks for listening!

19. Purity Ring – “Bodyache”
from: Another Eternity / 4AD / February 27, 2015
[Canadian indie electronic band based out of Montreal who formed in 2010. The band consists of two members: Megan James (vocals) and Corin Roddick (instrumentals).]

[Purity Ring play The Granada in Lawrence, KS, TONIGHT, May 20, with Braids, and Born Gold.]

Next week on Wed, May 27, we present our annual LGBT Pride Show, “That’s Soooo Gay.”

90.1 FM’s crystal clear, 100,000 watt signal, delivers some of the best quality of sound you will hear in the metro radio airwaves.