I met Anne Winter in February 1989. I asked her for items from her window that I could use as props at The Unicorn Theatre, she gladly started handing me things. My path crossed with Anne’s on the issues of censorship and free speech. The Greater Kansas City Coalition Against Censorship, sprang from Anne’s relationship with Richard & Linda Rostenberg, and so many others, and Anne created Culture Under Fire usually in April, lasting 10 days or so, involving lots of bands and music venues and performance artists and writers and teen poets, and zine editors, and activists and artists, all celebrating culture and free speech.

Anne Winter made a BIG difference, in my life, and in so many lives, and in our community. She connected people, cultivated events, nudged her friends closer to their dreams, making realities happen. I remember when she picked me up in her van, and drove me to Sandstone, put a wrist band on my arm and pushed me into the Spoken Word tent at Lolapalooza, or when she asked me to be Stage Manager for a show at The Uptown featuring Michael Moore, Iris DeMent and The Wilders. Anne was so staggering in her service to humankind, that it feels like she is still conducting her work, even after passing from this physical world. Is she collaborating with the higher frequencies?

I know I’m not alone, when I confess, that there are times when I feel her gentle encouragement or her beneficial honesty offered during a difficult decision. I hear her suggestion on the playlist, “can you include Calexico?” I see the relationships and connections she fostered, and all of us, who love her, are connected. I witness the meaningfulness of her beautiful life, in a world where it all goes… really fast.

I recently saw her son Max at YJ’s. David said, “look, there’s Max.” He has grown taller. He and his sister Eva, they love their mother so very much. And they have a beautiful father… Kurt von Schlemmer we love you, and send our best wishes to you and your family.

Today we start our show by remembering Anne Winter, with six songs from: The Pixies, Talking Heads, Calexico, The Flaming Lips, Loose Cannon Brass Band, and Iris DeMent, and intermingled with the music, are words from four friends: Lisa Cordes, Tim Kearns, Billy Smith, and Iris DeMent, and even a little bit of Anne herself.

We observe that on this day, in this moment, it has been five years.

We miss you Anne!

4. Anne Winter – “I danced so hard my skirt fell off”
excerpt from: Wednesday MidDay Medley Tribute to Recycled Sounds / March 22, 2006

Today we started our show by remembering our friend Anne Winter, with six songs from The Pixies, Talking Heads, Calexico, The Flaming Lips, Loose Cannon Brass Band, Iris DeMent, and a few words from four friends: Lisa Cordes, Tim Kearns, Billy Smith, Iris DeMent, and even a little of Anne herself. We observe that on this day it has been five years. Anne’s tremendous contributions to our lives and our community will live on in all of us who loved her and have committed to keep her spirit alive!

24 year old Calvin Arsenia balances his classical training with his love of the avant-garde. His mutiple collaborative projects have taken him on many adventures and Calvin recently returned home to Kansas City after living and performing in Edinburgh, Scotland. Standing at 6 foot 5 inches, Arsenia strikes a commanding presence complimented by his equally powerful vocal capacity and his abilities playing piano, guitar and harp. He also works as a songwriter, composer, lyricist, producer, and engineer. Calvin Arsenia made his debut as a performer in early 2010 and since then he has written, arranged and produced 5 EPs. Earlier this year in April, he release a 7-song EP called “Moments” and now is set to release a new EP “Prose,”a collection of new songs inspired by his own personal revival. Calvin Arsenia performs his acoustic show in pubs and local venues around the city, sharing his soaring and soulful vocal range.

Calvin Arsenia is happy to be back in Kansas City, Missouri and is playing more in area music venues.

His first performance was in early 2010, and he has done a lot in the last 4 years.] His recent releases: “Moments” and “Hands” both preceded a personal renaissance and Calvin is set to release new music in a collection called “Prose.”

20. Jorge Arana Trio – “Kallisto”
from: Oso / Haymaker Records / July 22, 2014
[Jorge Arana on Guitar and Keyboard, Josh Enyart on drums and Percussion, and Jason Nash on bass. Oso is the name of Jorge’s childhood Family Dog. The band was the winner of the 2013 Pitch Music Award for Best Avant-Garde group. Nominated this year for Best Live Act.]

[The Quivers play It Came Out of the Garage” – An All Hallows Eve Garage Rock Dance Party benefit for KKFI, Thursday, October 30, at 8:00 pm, at Knuckleheads Saloon, 2715 Rochester St, KCMO. It’s a garage stomp evening and a benefit for KKFI. with Til Willis & Erratic Cowboy, and Alan Murphy & The Frequent Flyers.]

90.1 FM Station Manager – Barry Lee is a busy guy, in just the past 9 months, he has produced benefit shows in tribute to Pete Seeger, another in tribute the The Byrds,. Barry Lee helped foster 90.1 FM’s collaborations with Folk Alliance International, the creating a Kickstarter campaign to fund remote broadcasting equipment to allow KKFI the ability to broadcast live from the Conference, and from fundraisers, and other events. Barry Lee also helped to bring Bill Sundahl on board as a new staff member, and foster 90.1 FM’s bigger role in the Crossroads Music Fest (CMFKC). He also helped cultivate the development of two of 90.1 FM’s newest and very popular radio programs: River Trade Radio, and The Boogie Bridge.

Barry Lee dropped by to talk about “It Came Out of the Garage” – An All Hallows Eve Garage Rock Dance Party benefit for KKFI, Thursday, October 30, at 8:00 pm, at Knuckleheads Saloon, 2715 Rochester St, KCMO. It’s a garage stomp evening and a benefit for KKFI. Music by The Quivers, Til Willis & Erratic Cowboy, and Alan Murphy & The Frequent Flyers. More info at http://www.kkfi.org/

Barry Lee also talked about Anne Winter and how she provided so much music from Recycled Sounds to programmers in the early years of KKFI.

KKFI 90.1 FM is having a great year. The station was recognized by Paste Magazine as one of the 10 Public Radio Stations You Wish Were in Your Town. W’ve made new friendships with the Folk Alliance International Conference, and renewed our friendship with the KC Blues Society and our station’s representation with other stations and community organizations. Barry Lee is a tireless worker for Community Radio.

“It Came Out of the Garage” – An All Hallows Eve Garage Rock Dance Party benefit for KKFI, Thursday, October 30, at 8:00 pm, at Knuckleheads Saloon, 2715 Rochester St, KCMO. It’s a garage stomp evening and a benefit for KKFI. Music by The Quivers, Til Willis & Erratic Cowboy, and Alan Murphy & The Frequent Flyers. More info at http://www.kkfi.org/ 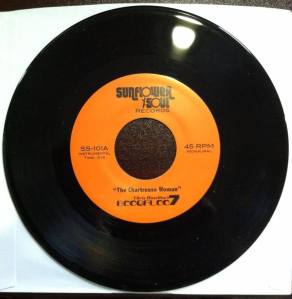 Brand new vinyl from Kansas City’s very own Chris Hazelton’s Boogaloo 7 who play the Green Lady Lounge every friday from 10:00 to 2:00 am.

25. Superchunk – “Does Your Hometown Care?”
from: Cup of Sand / Merge / August 19, 2013
[Cup of Sand is a double-sized collection of singles, B-sides and various rarities (including an Adam Ant cover and a David Bowie cover) released by Superchunk in 2003. The accompanying booklet is particularly meaty, as band members Mac McCaughan, Jim Wilbur, Laura Ballance and Jon Wurster weigh in with what they remember (or don’t remember) about the songs. The song “Does Your Hometown Care?” was on the soundtrack to the 1997 film Suburbia.]

26. David Bowie – “Five Years”
from: Stage [Live] / RCA / September 8, 1978
[Stage is David Bowie’s second live album, recorded on the Isolar II world tour, and released by RCA Records in 1978. First UK pressings were on translucent yellow vinyl and some European pressings were also available on blue vinyl. Though it was rumored at the time that this would be his final outing with the label, following dissatisfaction over the promotion of Low and “Heroes”, Bowie would in fact remain with RCA until 1982. The recording was culled from concerts in Philadelphia, Providence and Boston, USA. It primarily included material from Bowie’s most recent studio albums to that date, Station to Station, Low and “Heroes” but, in a surprise show of nostalgia, also featured five songs from The Rise and Fall of Ziggy Stardust and the Spiders from Mars. Aside from Bowie’s core team of Carlos Alomar, Dennis Davis and George Murray, band members included ex-Frank Zappa sideman Adrian Belew on guitar, Simon House from Hawkwind on electric violin, Roger Powell, best known for his work with Todd Rundgren in the group Utopia, on keyboards and Sean Mayes on piano, string ensemble and backup vocals. All would reunite the following year on Bowie’s next studio LP, Lodger. Generally considered more relaxed than Bowie’s previous live album, David Live (1974), Stage was praised on its initial vinyl release for the fidelity with which the band was able to emulate in concert the electronic and effects-filled numbers from Low and “Heroes”, as well as for the singer’s vocal performance. However, it was criticized for lacking a ‘live’ atmosphere, thanks to the recording being largely taken from direct instrument and microphone feeds which increased sound quality but minimized crowd noise. The original concert running order was also changed, with fades between tracks similar to a studio album.]

Next week on Wed, October 29, Marion Merritt of Records With Merritt returns as guest producer and co-host to play music from: Allah-Las, Casey and the Pressure Group, lulac, Plastic Clouds, Foxygen, Daphni, the 2 Bears, Aislers Set, Castenets, The Pop Group, Reverend Cleatus & The Soul Saviours, Donald Byrd, Muffs, Next Stop Soweto: Presents The Spirit of Molombo, Brigitte Fontaine and Brigitte Bardot and who knows what else. Also next week Jamie Searle of My Brothers and Sisters joins us live in the 90.1 FM studios.