Bill Sundahl sings and plays bass in the KC super group: The Starhaven Rounders. He is also the founder of Spice of Life Productions and organizer of the annual Spring Dance, and The Crossroads Music Festival. Recently Bill Sundahl joined the 90.1 FM KKFI Staff as our Special Events Coordinator and Volunteer Coordinator.

Big News, CMF is now a fundraiser! When 90.1FM KKFI – Kansas City Community Radio hired Bill as the Special Events Coordinator he brought some of the Spice of Life Productions events to 90.1 as fundraisers. This will be another fantastic event as always and Bill is very excited to work at 90.1 and to do his best to put on events that both benefit the community and 90.1 at the same time. 90.1 DJ’s will be MC’s for each stage.

Venues:
CrossroadsKC at 18th & Locust
ALL AGES – 6pm to Midnight

We gave away tickets to the:

[Jorge Arana Trio will play an album release show, Wednesday, July 19 at recordBar, 1020 Westport Road, with David Hasselhoff On Acid, High Magic, and In The Shadows.]

10:20 – Interview with Brenton Cook and members of Jorge Arana Trio 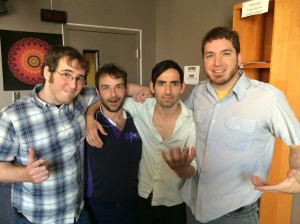 Our friend, Brenton Cook is a computer programmer and volunteers as web administrator for the Midwest Music Foundation where is the curator of the Midwestern Audio local compilation CD series, currently working on volume 3. Brenton joins us today to talk about the launch of his new Kansas City based record label called Haymaker Records. Joining Brenton are members of one of the hardest working bands in Kansas City, the Jorge Arana Trio: Josh Enyart, Jorge Arana, and Jason Nash. The band has a new recording called Oso that will be released on Haymaker Records. Jorge Arana Trio will play an album release show, TONIGHT Wednesday, July 19 at recordBar, 1020 Westport Road, with David Hasselhoff On Acid, High Magic, and In The Shadows. More info at http://www.haymakerrecords.net

Jason Nash (bass) has played with Fat Bobba, Various Blonde, and is currently working with a new group called “Parents” (It’s sort of a mix of dark surf and noise rock. with Jorge Arana playing drums; Jason on bass; Luis Arana on guitar; and Doby Watson on vocals.) 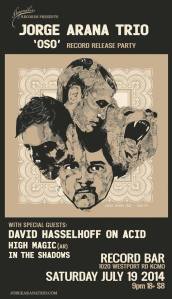 4. The Black Angels – “An Occurrence at 4507 South Third Street”
from: Clear Lake Forest / Independent / July 22, 2014
[The Black Angels are a psychedelic rock band from Austin, Texas, formed in 2004. They have released four studio albums and one compilation album. Their name is derived from the Velvet Underground song “The Black Angel’s Death Song”.]

5. Mat Shoare – “Keeping Everyone Happy”
from: Domestic Partnership / Golden Sound Records / December 11, 2013
[All songs by Mat Shoare. Made by Mat Shoare and Ross Brown. Most parts of this album were recorded by Mat Shoare in multiple bedrooms, basements, and offices from winter 2011 till fall 2012. It was finally focused into something cohesive by Ross Brown at The Reservation in Kansas City, MO.] [Mat Shoare is a Kansas City based singer, guitarist, songwriter, record label founder. His brand new solo record,”Domestic Partnership” was officially released December 11, 2012, on Golden Sound Records. This is Mat’s second full length solo release. He also released a solo EP. Mat has released two EPs with his band The Empty Spaces, and was a member of the band Everyday/Everynight. All of the music is available at Golden Sound Records, an independent, Kansas City based record label Mat founded with his friends Jerad Tomasino & Ross Brown.] 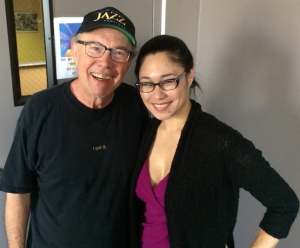 A clip from the award winning, Right Between The Ears featuring the voice of broadcasting legend John Jessup. Along with his voice work, John is the man responsible for creating this very radio program MidDay Medley, in the Spring of 2004, when he served as Program Director/ Manager for 90.1 FM. John has worked as an actor, voice over artist, and broadcaster. He is currently living in Fort Collins, Colorado. John records voice tracks for Kansas City Public Television from his home studio, and plays with the Green Valley Homesteaders, a bluegrass band.

Andi Meyer is a professional actress who has been seen onstage at the Unicorn Theatre, Theatre for Young America, The Missouri Repertory Theatre, the Heart of America Shakespeare Festival, and The New Theatre Restaurant. Along with being a member of the cast of Right Between the Ears, Andi also serves as Educational Director for Right Between the Ears educational camps and classes teaching students in grades 3-6, and 7-12.

Right Between the Ears was created by producer and writer, Darrell Brodgon in 1983 and originally called: The Imagination Workshop as a radio drama series. The show morphed into a sketch comedy show in 1990. Right Between the Ears is a Four-time winner of the Gold Medal as Best Comedy Show at the New York Festivals, and has been broadcast nationally on NPR stations since 1993, on BBC Radio 4, Sirius Satellite Radio and the in-flight programming service of Delta Airlines. Right Between the Ears also performs live stage shows at Liberty Hall, The Unicorn Theatre, Off Center Theatre, and are returning to the 2014 Kansas City Fringe Festival for performances starting Friday, July 18, at 9:00 pm through Saturday, July 26, at 4:30 pm, at Heartland Forum, in Crown Center.

Right Between the Ears Fringe Performances:

Right Between the Ears spoofs politics, TV and movies, sports figures, the rich and famous, the quirky and even the occasional turkey.

Right Between the Ears returns to the 2014 Kansas City Fringe Festival for performances starting Friday, July 18 9:00pm through Saturday, July 26 4:30pm at Heartland Forum, in Crown Center. (formerly American Heartland Theatre). More info at http://www.rightbetweentheears.com. For KC Fringe venues, and complete listings of performance times and details you can go to: http://www.kcfringe.org.

9. The Latenight Callers – “The Tease”
from: Songs for Stolen Moments / TLNC / June 8, 2013
[formed in Lawrence by baritone guitarist, Krysztof Nemeth, and vocalist Julie Berndsen, With the addition of Guitarist Ellen O’Hayer, Bassist Gavin Mac, and Nick Combs on keyboards.] 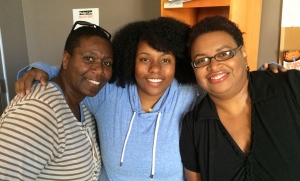 Cynthia Hardeman is the 2013 winner of Kansas City’s Project Playwright 2.0 competition. Her works have been performed at the 2012 Unicorn Theatre Gala, the 2012 InTENsity Showcase at Fishtank Performance Studio. Her play “Truth Be Dead” was chosen as a finalist in the 2012 WordBRIDGE Playwrights Laboratory at Center Stage Theatre in Baltimore, Md. Her play received a reading at The Unicorn Theatre in 2013 and the original premiere production as “Truth Stands” in the 2013-2014 season at Coppin State University in Baltimore, MD. It also is scheduled to have its World Premiere here in Kansas City at the Just Off Broadway Theatre in February of 2015.

Michelle T. Johnson’s plays have been produced in local playwriting festivals and for festivals in Houston, Texas and Medford, Connecticut. Johnson’s play “Wiccans in the ‘Hood” was selected for and produced in the “Midwinter Madness Short Play Festival” in New York City in February 2013 and was the sixth best-attended show in the 2013 Kansas City Fringe Festival. Her play “The Negro Whisperer” was in the New Work Series Festival in New York City in October 2013. Also this year, her plays “Trading Places” and “Wiccans in the ’Hood” have been produced by Brainspunk Theater of Philadelphia. Johnson’s play “Trading Races: From Rodney King and Paula Deen” has been nominated for three awards in the NYC Planet Connections Theater Festival. Her play “Echoes of Octavia” will be produced by KC Melting Pot Theater this August.

Teresa Leggard is a writer, editor, poet and playwright. Her publications include Number One and Aunt Chloe magazines, as well as the journal Reverie: Midwest African American Literature. Her short plays have been staged in Kansas City at InTENsity 2.0 and the Barn Players 6X10 Festival, and in Washington D.C. at the DC Black Theater Festival. This August she will compete in the third installment of Project Playwright at the Arts Asylum. Teresa is an editor at Hallmark Cards, a member of The Writers Place, and a graduate student in UMKC’s Creative Writing program.

Michelle T. Johnson, Cynthia Hardeman, and Teresa Leggard – a trio of local African-American female playwrights – have joined together as The Playing Field Presents “Girl on Girl: 3 Quickies in 1 Hour” for the 2014 Kansas City Fringe Festival, showing July 19 through July 26 at Just Off Broadway Theatre.

“Girl on Girl” is directed by Andre Du Broc

What: “Girl on Girl: 3 Quickie in 1 Hour” in KC Fringe Festival

Tickets: $15, or $10 with Fringe Button, purchase at http://www.kcfringe.org or at the door

GIRL ON GIRL, showing July 19 through July 26 at Just Off Broadway Theatre. For KC Fringe complete listings go to: http://www.kcfringe.org.

10. Molehill – “Why Did You Make Me Care?”
from: Why Did You Make Me Care? – Single / Bar None / October 3, 2013
[Chicago based 4-piece: Peter Manhart, Trevor Jones, Greg Van Zuiden, and Devin Staples currently on tour this summer. Molehill’s debut album ‘Equinox’ was released March 6, 2012. Molehill is currently in general rotation on 89.5FM Chicago, 88.9FM WIIT Chicago, UIC Radio, and Black Collar Radio, and DePaul Radio.]

Schaeffer Nelson, has two plays premiering in this year’s Kansas City Fringe Festival. Schaeffer Nelson is the author of last year’s original play OUTSpoken KC: Love and Marriage, True Stories from Kansas City’s LGBT Community, premiering in October 2013 at Unity Temple on the Plaza and receiving an encore performance in January 2014 at Peace Christian Church UCC. Schaeffer Nelson has a BA in Creative Writing from the University of Southern California. His fiction has placed twice in USC’s undergraduate fiction competition and has appeared in Palaver. He is an executive producer on the short film “Return”, written by Lonita Cook (The Tim and Lo Show) and directed by Patrick Rea (Nailbiter). His short play “Fishers of Men” is premiere at this summer’s Fringe Festival, as part of More 4 Play, directed by Scott Cordes, and his longer play, Kings of Israel is being directed by Phil Kinen and is playing July 18 through July 26 at Phosphor Studios, 1730 Broadway Blvd. For the 10th Annual Kansas City Fringe Festival. For KC Fringe complete listings go to: http://www.kcfringe.org.

This irreverent play tells a Biblical story with a queer sensibility that places the young shepherd David in a series of bedroom conversations with a violent, paranoid King Saul. David must test the limits of intimacy with a king whom he is secretly charged by God to overthrow. The boundary lines of love, violence, and trust must be crossed if David is to achieve his goal. Eyebrows will rise at Phosphor Studios, 1730 Broadway Blvd, KCMO Performances on:Friday, July 18 @ 6:00pm | Sunday, July 20 @ 7:30pm | Friday, July 25 @ 9:00pm | Saturday, July 26 @ 6:00pm

Already, discussions of the play’s content have stirred up tense conversations: Is it too queer for the Bible? Can Biblical stories be this steamy? One thing is for certain: You didn’t see this version in Sunday school.

Irreverently comedic and increasingly tense, Kings of Israel retells the complex and dangerous relationship between King Saul and David, the first two kings of Biblical Israel. After King Saul proves to be unstable and violent, the Prophet Samuel secretly anoints an isolated young shepherd, David, to be Saul’s usurper. But before David fulfill God’s plan and assume the throne, he is dispatched to be Saul’s private musician. Over the course of a series of bedroom conversations, the intimacy between the two men deepens. As bloody choices draw near, David questions where his loyalty to God ends and his relationship with King Saul begins. Kings of Israel takes the Biblical story in a provocative new direction.

The play contains sexual content, violence, and adult language and is for mature audiences. 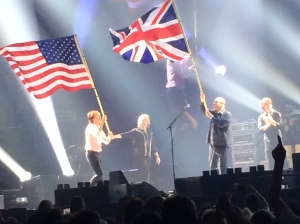 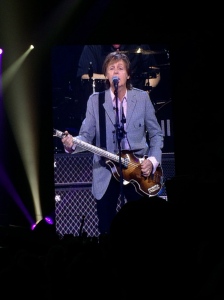 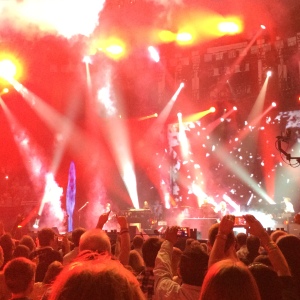 Lastly, we’re very sad to hear of the passing of Thomas Erdelyi, better known by his stage name Tommy Ramone, a Hungarian American record producer and musician, who until this past Friday, July 11, was the last surviving, original founding member, of the influencial punk rock band The Ramones. Tommy was only 62. Fr our listeners, on our Wednesday MidDay Medley Facebook Page we’ve posted a link to our in-studio interview with Tommy Ramone, from the June 18, 2008, edition of Wednesday MidDay Medley