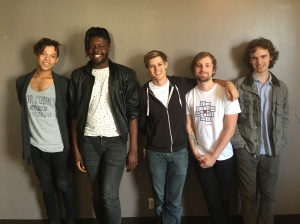 2. Kevin Morby – “I Have Been to the Mountain”
from: Singing Saw / Dead Oceans / April 15, 2016
[third release from Kevin Robert Morby born April 2, 1988. Morby learned to play guitar when he was 10. In his teens he formed the band Creepy Aliens. 17-year-old Morby dropped out of Blue Valley Northwest High School, got his GED, and moved from his native Kansas City to Brooklyn in the mid-2000s, supporting himself by working bike delivery and café jobs.[5] He later joined the noise-folk group Woods on bass. While living in Brooklyn, he became close friends and roommates with Cassie Ramone of the punk trio Vivian Girls, and the two formed a side project together called The Babies, who released albums in 2011 and 2012. He began a solo career in 2013 releasing his debut album Harlem River with positive reviews. His second album Still Life was released the following year.]

[Getting ready to embark on an international tour in London on May 5, Kevin Morby will be back in Kansas City to play The Riot Room on June 12.]

[John Velghe and The Prodigal Sons play Midland Theater for Middle of the Map Festival May 7, with Amy Mann and Charles Bradley.]

4. Iris DeMent – “Listening To Singing”
from: The Trackless Woods / FlariElla / August 7, 2015
[6th studio album from Grammy nominated Iris DeMent who NPR said was considered “one of the great voices in contemporary popular music.” The Trackless Woods sets 18 poems by acclaimed 20th century Russian poet Anna Akhmatova to life. Hailed as one of Russia’s finest poets, Akhmatova survived the Bolshevik Revolution, both World Wars and Stalin. She lost family, friends and fellow writers to political killings and labor in the gulags. When Iris randomly stumbled upon Akhmatova’s work in a book of poetry a friend sent as a gift, she was immediately taken by the sorrow and burden of the poems, juxtaposed with Akhmatova’s lightness and transcendence in the face of inhumanity. “Anna’s gift of song is so strong, about alI I had to do was get really quiet and listen,” says Iris. After reading that first poem the melodies began pouring out of her, and before she even fully understood what was driving her, Iris was gathering musicians and friends, including co-producer Richard Bennett (Emmylou Harris, Neil Diamond, Steve Earle), to record ‘The Trackless Woods’ in her living room over a five-day period. The result is a breathtaking pairing of piano and voice in Iris’ style with timeless melodies that are deeply rooted in the American South. The project also fulfilled a long yearned-for desire to connect with her adopted daughter’s culture and history. Iris and her husband Greg Brown adopted their daughter from Siberia in 2005, when she was 6, and she says “I’d never have made this record were it not for her.”]

7. The MGDs – “Left Me For Good”
from: Wake Up / The MGDs / February 15, 2016
[Second studio album from Kansas City based 6-piece, formed in 2007, with Matt Davis on drums, percussion & vocals; Greg Bush on bass; Damon Parker on keyboards & vocals; Scott “Snoof” Middleton on guitar; Rudy Vasquez on saxophones & percussion; and Eric Martens on trumpet.]

[Wick & The Tricks play The #FREECAGEDBIRD Show, Friday, April 22, at 7:00 pm, at Prohibition Hall, where Stephonne will perform songs from new album, with Ivory Black, and DJ Joc Max.]

10:32 – Interview with Stephonne and Jamie Searle

Calling himself the lovechild of Prince and Billie Holiday, 29 year old singer-songwriter Stephonne Singleton was born in Kansas City and grew up in the inner-city, of Wyandotte County going to High School at Bishop Ward. He received his Bachelor of Arts degree in Music from Bendictine College and his Masters in Entertainment Business from Full Sail University. He worked as a musician and actor in Kansas City and joins us to share music from his upcoming album, “Caged Bird Sings Songs About Red Beard” to be released this summer. Stephonne will perform new songs from the album at The #FREECAGEDBIRD Show, Friday, April 22, at 7:00 pm, at Prohibition Hall, 1118 McGee St, KCMO, where Stephonne will be joined by Wick & The Tricks, Ivory Black, and DJ Joc Max.

Also joining us is musician, composer, arranger, band leader and producer, Jamie Searle, member of the band My Brothers & Sisters.

Stephonne Singleton and Jamie Searle, were last on the show together, back on November 4.

Stephonne grew up listening to Anita Baker, Luther Vandross, and Patti Labelle to Barbara Streisand, The Beatles and Marvin Gaye.” The young singer, from age 6 on, sang in choirs and read album liner notes, and was fascinated by all the players, writers, producers and lyrics he found.

“I always had a notepad and a full ink pen and I would just write. I heard every instrument and note in my head. I had such a love for melody because it was the way I remembered those songs. Even when I knew notes and chords I still wrote it all in my
The genres of Jazz, Blues, R&B, Pop, Rock, Folk and Funk all collided together.”

The songs for “Caged Bird Sings Songs about Red Beard” were all birthed in the last 5 years, a time Stephonne describes as a dark time of heartbreak, identity crisis, and depression and healing. “Without music I would truly be dead. All of these thoughts and emotions coursed through my soul and body as bad blood and getting it out on paper and recording it was my only salvation. So much came out but these songs, the survivors, are the ones that never went away. These songs demanded to be heard and hit me like a brick every time I sang through a melody of them.”

Stephonne wrote that “The stars aligned when you met, Jamie Searle, of My Brothers & Sisters who is serving as producer and arranger for the new album.

Stephen writes, “He is the first person that could hear exactly what was in my head. Even with a music degree I could never bring the songs what they needed and he is such a true servant of music it blows my mind every day.”

The #FREECAGEDBIRD Show, Friday, April 22, at 7:00 pm, at Prohibition Hall, 1118 McGee St, KCMO, where Stephonne will perform new songs from the album mixed with a few classic songs. Calling himself the lovechild of Prince and Billie Holiday, Stephonne will be joined by Wick & The Tricks and DJ Joc Max. More information at: stephonne.brownpapertickets.com!

11. Ivory Black – “Ready Get Set”
from: Ready Get Set EP / Independent / June 23, 2015
[Singer, songwriter, rock & roller, Ivory Black was born in 1986 in Peoria Illinois. Given up for adoption at the age of four, it was difficult to find trust in people after living with eight different foster families, running away at 15, moving from Indiana to Oklahoma, Ivory eventually ended up in Seattle. In 2011, after a friend sent a plane ticket, Ivory landed in the Kansas City. Ivory has been performing in singer-songwriter showcases at Davey’s Uptown, and many other area venues. On June 23, 2015, Ivory released the debut EP, Ready Get Set. More info at: https://www.ivoryblackmusic.com/%5D

Riala is a three piece Kansas City based band that was formed in May of 2013 by Nicholas Turner on voice & guitar, Kalo Hoyle on bass, and Morgan Greenwood on drums. The band’s debut EP, Be Here | Be There, was recorded, mixed and mastered by Joel Nanos at Element Recording Studios, and released on vinyl by area label, Haymaker Records on September 4, 2015.

Nicholas Turner, Morgan Greenwood, and Kalo Hoyle joined us to share music from their new split single to be released in May, as the band embarks on their upcoming tour with Via Luna. Before the band travels west, Riala plays Wednesday MidDay Medley’s – KKFI 90.1 FM DAY PARTY for Middle of the Map Fest, May 7, at The Tank Room.

Over the past two years Riala has built a following performing constantly at FOKL, Vacant Farm, Art Closet, The Union, The Tank Room, recordBar, Harlings, The Brick.

12. Riala – “Sirens (a refute)”
From: the new split single Riala did with Via Luna that will be released in May.
[Nick Turner on Voice & Guitar, Kalo Hoyle on bass, Morgan Greenwood on drums.]

Riala’s new split single to released soon, as the band embarks on their upcoming tour with Via Luna. Before the band travels west, Riala plays Wednesday MidDay Medley’s – KKFI 90.1 FM DAY PARTY for Middle of the Map Fest, May 7, at The Tank Room.

[Riala plays Wednesday MidDay Medley’s – KKFI 90.1 FM DAY PARTY for Middle of the Map Fest, May 7, at The Tank Room. ]

Patrick Alexander is a multidisciplinary artist who incorporates collage, painting and drawing with original sound compositions, developed organically, and often exhibited as a site-specific installations. His work has been exhibited in LA, at The Telephone Booth Gallery, Next Space, Fahrenheit, H&R Block Artspace, Leedy-Voulkos, to name a few. As a curator he was owner operator of Locus Solis Art Gallery, and served as Art Gallery and Theatre Director the YWCA of Greater Kansas City Kansas. Since 1997 he has operated a mobile sound system for special events and clubs and has DJ’d (under the alias Fat Sal) locally and nationally. He specializes in rare vinyl recordings of soul, funk, Dub, reggae, latin, jazz, early hip hop and dance music.

As Facilities Manager for the Charlotte Street Foundation, Pat is responsible for the day to day management, operation, and maintenance of Urban Culture Project exhibition and performance spaces and Studio Residency Program facilities.

All Artists-in-Residence have been awarded free studio space and related support through the Charlotte Street Studio Residency Program.

Artist Studios will be open from 6PM to 10PM on Friday, April 29th with special offerings to include an array of original live music and dance performances on Friday evening. Artists will be on hand to discuss their work. Artwork will be available for purchase.

6:30 in MULTI-PURPOSE AREA / SOUTH VISUAL STUDIOS featuring Ensemble of Irreproducible Outcomes members; Brian Padavic and David McIntire on bass and sax/clarinet performing two irreproducible, repeated one and half-hour performances of original compositions accompanied with pre-recorded electronics. The parameters of each work are flexible with different outcomes each set.

8:00 BLACK BOX ROOM features Shades of Jade with special guests. The neo-soul/jazz outfit debut the incorporation of laptop electronic production into their live set. This presentation will include audience participation to demonstrate the collective experience of composing music within a group while adding another color to their musical paintings. No musical experience needed.

Artist-in-Residence, Cody Kauhl’s video for his piece, Aurum, which will be on display at our Open Studios event, April 29th!

12:00-5:00PM Galleries will be open for exhibition viewing, “The One Thing That Can Save America”

Patrick Alexander thanks for being with us on Wednesday MidDay Medley.

[Shadow Rabbits will play their first show at Records With Merritt, Friday, April 22, w/ Foxlin, and Johnnie Booth and the Head Wounds]

Next week, on April 27 Chris Haghirian and Nathan Reusch join us for two hours of Music From The Middle of The Map.