Guest producer Marion Merritt joined us to share information from her musically-encyclopedic-brain. Marion Merritt is the co-creator of the blog: a2-m3.com providing info about: Music, Film, Art, Books, TV, Technology, with links, downloads, and articles.

2. Matias Aguayo – “Una Fiesta Diferente”
from: The Visitor / Comeme Records / June 24, 2013
[3rd album from DJ Matias Aguayo is inspired from his years of touring and creates internationally flavored sounds, implementing his voice and using percussion, performing live with “the district union” a band that provides a powerful rhythm section.]

5. T-Model Ford – “Bad Man”
from: Bad Man / Big Legal Mess Publishing / September 10, 2010
[James Lewis Carter Ford (c.early 1920s – July 16, 2013). An American blues musician, using the name T-Model Ford, he was nable to remember his exact date of birth, he began his musical career in his early 70s, and recorded for the Fat Possum label, then switched to Alive Naturalsound Records. His musical style combined the rawness of Delta blues with Chicago blues & juke joint blues styles. According to records, Ford’s year of birth was between 1921 – 1925, though his record company gave his age as 94, suggesting a birth in 1918 – 1919. Starting with an abusive father who had permanently injured him at eleven, Ford lived his entire life in a distressed and violent environment, towards which he was quite indifferent. Ford, an illiterate, worked in various blue collar jobs as early as his preteen years, such as plowing fields, working at a sawmill, and later in life becoming a lumber company foreman and then a truck driver. At this time, Ford was sentenced to ten years on a chain gang for murder. Allegedly, Ford was able to reduce his sentence to two years. He spent many of his years following his release in conflicts with law enforcement. Ford lived in Greenville, Mississippi and for a time wrote an advice column for Arthur magazine. Reportedly, he had twenty six children. According to music writer Will Hodgkinson, who met and interviewed Ford for his book Guitar Man, Ford took up the guitar when his fifth wife left him and gave him a guitar as a leaving present. Ford trained himself without being able to read music or guitar tabs. Hodgkinson observed that Ford could not explain his technique. He simply worked out a way of playing that sounded like the guitarists he admired — Muddy Waters and Howlin’ Wolf. Ford toured juke joints and other venues, for a while opening for Buddy Guy. In 1995, he was discovered by Matthew Johnson of Fat Possum Records, under which he released five albums from 1997 to 2008

6. Anna von Hausswolff – “Mountains Crave”
from: Ceremony / Other Music Recording / July 9, 2013
[2nd album from Gothenburg, Sweden, based musician Anna Michaela Ebba Electra von Hausswolff (born Sept. 6, 1986). A singer, pianist, songwriter. She released her debut single, “Track of Time”, Feb. 5, 2010, followed by her critically acclaimed debut album Singing from the Grave. In March 2010 she toured Brazil with Taken by Trees. In 2011 she opened for Lykke Li and also for M.Ward. Hausswolff is noted for her expressive voice and her live performances, and is sometimes compared to Kate Bush. Hausswolff used to be a student of architecture at Chalmers University of Technology. She is the daughter of sound artist Carl Michael von Hausswolff.]

7. David Lynch & Lykke Li – “I’m Waiting Here (Bonus Track)”
from: The Big Dream / Sacred Bones / July 2, 2013
[2nd album from David Keith Lynch (born January 20, 1946). An American filmmaker, television director, visual artist, musician and occasional actor, Lynch is known for his surrealist films, he has developed his own unique cinematic style, which has been dubbed “Lynchian”, a style characterized by its dream imagery and meticulous sound design. Born to a middle-class family in Missoula, Montana, Lynch spent his childhood traveling around the United States, before going on to study painting at the Pennsylvania Academy of Fine Arts in Philadelphia, where he first made the transition to producing short films. Deciding to devote himself more fully to this medium, he moved to Los Angeles, where he produced his first motion picture, the surrealist horror Eraserhead (1977). After Eraserhead became a cult classic on the midnight movie circuit, Lynch was employed to direct The Elephant Man (1980), from which he gained mainstream success. Then being employed by the De Laurentiis Entertainment Group, he proceeded to make two films: the science-fiction epic Dune (1984), which proved to be a critical and commercial failure, and then a neo-noir crime film, Blue Velvet (1986), which was critically acclaimed. Next, Lynch created his own television series with Mark Frost, the highly popular murder mystery Twin Peaks (1990–1991); he also created a cinematic prequel, Twin Peaks: Fire Walk with Me (1992), a road movie, Wild at Heart (1990), and a family film, The Straight Story (1999), in the same period. Turning further towards surrealist filmmaking, three of his subsequent films operated on “dream logic”, non-linear narrative structures: Lost Highway (1997), Mulholland Drive (2001) and Inland Empire (2006). Meanwhile, Lynch embraced the internet as a medium, producing several web-based shows, such as the animation Dumbland (2002) and the surreal sitcom Rabbits (2002). Allmovie called him “the Renaissance man of modern American filmmaking”, while the success of his films has led to him being labelled “the first popular Surrealist.]

8. The Three O’Clock – “Jet Fighter”
from: The Hidden World Revealed / Omnivore Records / June 25, 2013
[Alternative rock group associated with the Los Angeles 1980s Paisley Underground scene. Lead singer and bassist Michael Quercio is credited with coining the term “Paisley Underground” to describe a subset of the 1980s L.A. music scene which included bands such as Dream Syndicate, Rain Parade, Green on Red, and the Bangles. After 25 years of turning down reunion offers, The Three O’Clock finally reformed after being presented with a chance to play at the 2013 Coachella festival. Three quarters of the “Classic” line-up, Michael Quercio (vocals/bass), Louis Gutierrez (guitars) & Danny Benair (drums) – were joined by new recruit Adam Merrin (keyboards). The group played both weekends of the Coachella festival, and also played on Conan on April 10, 2013. They later embarked on a mini-tour, and released several archival recordings that same year. The final show was at Fingerprints record store in Long Beach California on June 24, 2013.]

10. Charlie Boyer and the Voyeurs – “I Watch You”
from: I Watch You – Single / Heavenly Records / October 15, 2012
[The Voyeurs are led by Charlie Boyer with Sam Davies, Samir Eskanda, Danny Stead and Ross Kristian completing the line-up. Produced and engineered by Edwyn Collins & Sebastian Lewsley. Recorded at West Heath Studios, London on the 12th and 13th of September 2012. charlieboyerandthevoyeurs.bandcamp.com]

11. Irma Thomas – “We Wont Be In Your Way Anymore”
from: In Between Tears (Remastered) / Alive Natural Sounds / 2013
[Original 1973] [born February 18, 1941, Ponchatoula, Louisiana, United States) is an American singer from New Orleans. She is known as the “Soul Queen of New Orleans”. Thomas is a contemporary of Aretha Franklin and Etta James, but never experienced their level of commercial success. In 2007, she won the Grammy Award for Best Contemporary Blues Album for After the Rain, her first Grammy in a career spanning over 50 years. Born Irma Lee, as a teen she sang with a Baptist church choir, auditioning for Specialty Records as a 13-year old. By the age of 19 she had been married twice and had four children. Keeping her second ex-husband’s surname, she worked as a waitress in New Orleans, occasionally singing with bandleader Tommy Ridgley, who helped her land a record deal with the local Ron label. Her first single, “(You Can Have My Husband but) Don’t Mess with My Man,” was released in spring 1960, and reached number 22 on the Billboard R&B chart.] 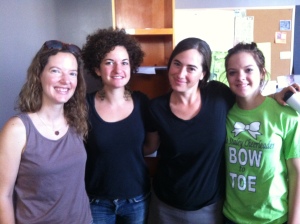 Carsie’s song “Smoke Alarm” features the festive and rich musical culture of New Orleans. Carsie is originally from the Shenandoah Valley of Virginia, but New Orleans is a big influence on her music.

Carsie’s writes in her bio… “I didn’t go to school when I was a kid. Instead I ran around the farm and hunted salamanders and read books. I was raised on folk music by a house full of crazy people. When I was a teenager, I discovered Billie Holiday and Nina Simone, and I learned all of their songs. At sixteen, I moved away from home to join an artist colony in Oregon, where I learned to hitchhike and dumpster dive, and sang backups in a funk band. Then I moved to San Francisco, and then Philadelphia, and now I live in New Orleans, which is the most magical city in the world.”

Besides her music, Carsie also write a blog about sex: brighterthanabuoy.blogspot.com

Carsie writes: “Love is hard. Sex is fun. Life is messy. We’re all going to die. Our hearts are idiots, our wills are weak, we’re bumbling around fucking the wrong people and falling in love for the wrong reasons and pretending like we have all the time in the world to figure it out. My aim is to write songs that make you stop pretending, even if only for an instant. I want to wake you up to your brief, idiotic, miraculous life.”

Along with just releasing a new music video for her song “Smoke Alarm” and embarking on a new solo tour across the country, Carsie has also just launched a new Kickstarter campaign to raise funds to produce her new project: ‘Jazz Is for Everybody.’

You can learn more about Carsie Blanton at: carsieblanton.com.

15. Carsie Blanton – “Crazy He Calls Me” (LIVE)
a song Carsie is developing for her new “Jazz is For Everybody” project.

Carsie released Rude Remarks & Dirty Jokes, a 3-song EP, April 23, produced by Oliver Wood (The Wood Brothers). Carsie writes, “The 1st song is about a girl who killed her ex because he was an ass. The 2nd song is about somebody who accidentally falls in love with everyone she sleeps with. The 3rd song is about how people oughtta have a little backbone and say what they mean. The songs are about me, minus some details.”

Kasey Rausch and Mikal Shapiro are two KC based singer, songwriters, who perform together as Partners in Glory. Their longtime friendship also includes presenting House Concerts in Midtown backyards. 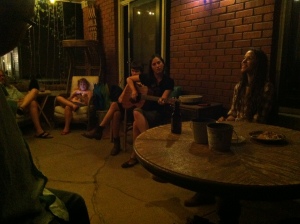 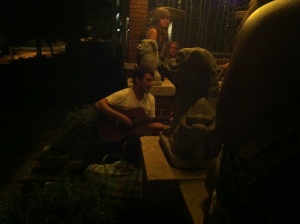 Carsie is playing a lot of House Concerts on this current tour, she spoke to our radio audience about playing a club, or hall, in comparison to playing a “House Concert.”

19. Devo – “Space Girl Blues”
from: Hardcore, Vol. 1 / Devo Inc. / June 25, 2013
[Hardcore documents DEVO’s beginning as pre-punk outcasts in the fertile Akron, Ohio underground rock scene. Spawned at the nearby college of Kent State, site of the infamous May 4 Massacre, DEVO formed as a conceptual art project armed with a radical philosophy of de-evolution. Brothers Mothersbaugh (Mark and Bob) and Brothers Casale (Jerry and Bob) along with drummer Alan Myers soon whipped-up an otherworldly brand of “devolved blues” that could hold its own alongside the beatnik groove of 15-60-75 (aka The Numbers Band) or the primal rock poetry of the Bizarros. Recorded on various 4-track machines and in tiny studios, basements, and garages between 1974-1977, Hardcore reveals their strikingly clear vision: rock n’ roll stripped bare of its collective cool and jerked back into propaganda fit for post-modern man. Threaded beneath it all are lyrical themes of post-McCarthy paranoia, middle-class ephemera, and DEVO’s long-running topic of choice: sex, or lack thereof.]