1. Loose Park – “A Cup A Tea”
from: Monstrous / Independent / June 4, 2013
[Brand new music from Kansas City based band formed in June 2013 with Matthew Dunehoo on guitar, vocals; Beckie Trost on Bass guitar; and Mike Myers on Drums . This trio are also members/former members of Doris Henson/Baby Teardrops/Ecstatics, The String & Return/In The Pines/Spacesuit, and Soft Reeds.]

2. Vigil and Thieves – “Longwood”
from: Single Demo track from band’s Reverberation page / Independent / 2014
[Lawrence, Kansas, based trio of Andrew Flaherty on Drums, Steph Castor on Guitar, and Sarah Storm on Vocals, Guitar, and Keys. The band is busy playing several shows this summer in KC, Topeka, Lawrence, and in September the band will jump on the road to St. Louis, Chicago, Milwaukee, and Portland, Maine. The band is currently recording their debut EP at their own recording studio, Vigilante Studio in Ottawa, KS.]

3. Now Now Sleepyhead – “Influenza (radio edit)”
from: Violator / Independent / July 12, 2014
[The band’s currently line up includes: Phil Park on guitar, and vocals; Aaron Crawford on drums and vocals; and newest member, Mychael Scott Reed (formerly of In Back of A Black Car) on bass and synthesizers. Their recording also features Brian McCourt on bass and vocals, and Kim Baldwin on bass and vocals.]

[Now Now Sleepyhead play a special release party at the recordBar, Saturday, July 12 with Akkilles, & The Author and The Illustrator.] 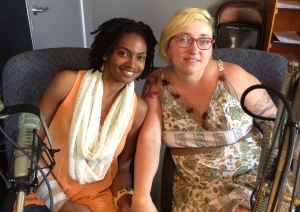 Jeanette Powers is a poet, painter, producer, philosopher, a mathematician and mom, who also helped to form the Poetic Underground, and is the manager at Uptown Arts Bar, 3611 Broadway, in Kansas City. She was born and raised in the Kansas City, graduated from Lee’s Summit High School and went to college at Rockhurst University.

Jeanette and Mz Angela Roux joined us to discuss Estrogen Rush: A Tribute to Maya Angelou, Saturday, July 12, at 8:00 PM, a celebration of Kansas City area female poets honoring the memory and spirit of legendary poet, and how Uptown Arts Bar is also a KC Fringe Festival venue and is the home of the Poetic Underground POUND Slam. More info at http://www.uptownartsbar.com

Jeanette Powers was a student of the Physics and Math Department, at Rockhurst University, where she created visual art pieces connecting art and mathematics.

Estrogen Rush: A Tribute to Maya Angelou, Saturday, July 12, at 8:00 PM, a celebration of Kansas City area female poets honoring the memory and spirit of the legendary poet.

Poetic Underground host shows every Wednesday, at 9:00 pm, at Uptown Arts Bar, and has hosted readings in KC since early 2013. The expanded into workshops and now the competitive POUND SLAM hosted by SlamMaster Jen Harris and co-host Alyssa Bennett Smith. The first certified poetry slam in the city. Every First Wednesday at 9 PM at the Arts Bar.

Uptown Arts Bar is a venue for The KC Fringe Fest.

Estrogen Rush: A Tribute to Maya Angelou, Saturday, July 12, at 8:00 PM, a celebration of Kansas City area female poets honoring the memory and spirit of legendary poet and author Maya Angelou. Uptown Arts Bar is also a KC Fringe Festival venue and is the home of the Poetic Underground POUND Slam. More info at http://www.uptownartsbar.com 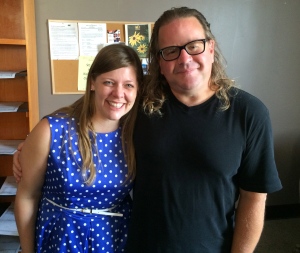 Critically acclaimed singer songwriter Sara Swenson has released some of our most played and favorite recordings of the last 7 years. Her self titled debut recording was originally released in 2008 but it took us a while for us to get our hands on the recordings and we ended up playing every track on the CD. Sara’s debut ended up at the top of our list of The 100 Best Recordings of 2009. In 2010 Sara Swenson released her second full length recording, “All Things Big and Small” again working with Don Chaffer in Nashville who added new layers to Sara’s great songs and voice. In November of 2011, Sara released her 5 song EP called “Never Left My Mind,” featuring her band at the time, The Pearl Snaps. In that time frame, she also had picked up two Kansas City Singer-Songwriter of the Year awards, performed with Sarah McLachlan’s Lilith Fair, and placed a song on the season finale of ABC’s “Private Practice.” Then after the school year ended in 2012, Sara Swenson left her job as a High School English and Journalism Teacher in Platte County High School, and left the Kansas City music scene, and she flew off to the United Kingdom, where she ended up getting married to her husband. This spring, Sara returned to Kansas City and performed for the Folk Alliance International Conference. She joins us today to discuss her fourth studio album that captures snapshots of her 18-month experience of living abroad, moving from dating to marriage and sorting through the accompanying transitions and emotions. Produced by Don Chaffer in Nashville. Sara Swenson will play a special “Runway Lights” Release House Show, on KC’s West Side, Friday, July 18, at 7:30 PM. and she will also play a special release show in Platte City, on Saturday, July 19.

Runways Lights is a beautiful new recording of songs which tell the story of Sara’s adventure to the United Kingdom, her marriage, and flying from runway to runway. Sara talked why she moved away to England and Northern Ireland.

Sara started working on Runway Lights as a recording, upon re-entry to the USA, with a two week stay in Nashville working with Don Chaffer again. The album has a very different texture than her debut, she is working with new sounds to match her voice and lyrics.

The last song on Runway Lights is called, “Transitions” that talks about how things will never be the same. Sara talked about what it has been like moving home, coming back to Platte County High School, Platte City, Kansas City, and family.

Sara Swenson is such an accomplished songwriter, it is hard to believe that it was just 2007, when she first tried her hand at songwriting at the offhand suggestion of a guitar salesman.

7. Sky Smeed – “Cool Summer Evening”
from: Sky Smeed / Independent / August 11, 2012
[The 4th full length release from Sky Smeed who was born and raised outside of Chanute, Kansas in an old, one-room schoolhouse his parents bought and turned into a home in the early seventies.]

8. The Big Iron – “Anything I Can Do” (Vinyl)
from: We Will Fail / Independent / May 30, 2014
[The band’s third full-length release was produced and mixed by Joel Nanos of Element Recording. It’s the band’s follow-up to 2008’s “Thanks for the Therapy,” and their 2001 debut recording, “Bury My Mistakes.” Ricky Reyes on guitar; Jon Paul on drums; Jeff Pendergraft on vocals, PK on guitar; and Mike Farren on bass.]

[The Big Iron play an album release show at Replay in Lawrence on Friday, July 11, with Iron Guts Kelly, and Stiff Middle Fingers.]

[Jason Vivone & The Billy Bats play The Youth Jam and Brunch at The Phoenix, Sunday, July 13, 10:00 am to 2:00 pm. This is an opportunity for young musicians under the age of 18 to bring their instrument and jam with professional musicians.]

Danny Powell, is President of the Kansas City Blues Society. He joins us to discuss: The first Youth Jam and Brunch at The Phoenix, Sunday, July 13, 10:00 am to 2:00 pm. This is an opportunity for young musicians under the age of 18 to bring their instrument and jam with professional musicians. More info at: http://www.kcbluessociety.org

We just heard from the KC based band Jason Vivone and The Billy Bats, they will be the host band for this first Youth Jam and Brunch.

This is a collaboration with Kansas City Blues Society and The Phoenix.

The Kansas City Blues Society is a 501 (c)(3) non-profit corporation dedicated to preserving our blues music history by supporting the musicians, and the youth. Founded in 1980, The Kansas City Blues Society has over 500 individual members and. It hosts events such as The Blues Competition, Blues In The Schools, Youth Jams, Blues Tours and Fundraisers for Musicians and others in need.

An eleven person Board of Directors governs the Society. Funding for The KCBS comes from membership dues, private donations, corporate sponsorships, merchandise, advertising and event ticket sales. Contributions to The KCBS, including membership dues, are tax deductible to the fullest extent allowable by law.

The KCBS seeks to preserve and to highlight the rich history of Blues through maintaining the rich heritage of all the musicians that come from the Kansas City area. The KCBS mission is to provide value to its Members, Musicians and its Community

Kansas City Blues Society and The Phoenix present: Youth Jam and Brunch at The Phoenix, Sunday, July 13, 10:00 am to 2:00 pm. This is an opportunity for young musicians under the age of 18 to bring their instrument and jam with professional musicians. More info at: http://www.kcbluessociety.org

[Me Like Bees play The Riot Room, on Friday, July 11 with Middle Twin, and Westerners. The band will also be part of the Vans Warped Tour.]

11:28 – Interview with Madisen Ward and the Mama Bear

Madisen Ward and the Mama Bear, first played LIVE in our 90.1 FM studios on our July 10, 2013 – Wednesday MidDay Medley broadcast. They returned to the show on November 20, 2013, to help us celebrate our 500th show. Recently the duo “stoled the show” at 90.1 FM’s Birthday Celebration of Pete Seeger at Unity Temple in May.

Madisen Ward & The Mama Bear consist of Madisen Ward and mom, Ruth Ward. They are a modern soulful/folk music duo. Performing mostly all original music. Madisen Ward was born in Oklahoma, and grew up in the outskirts of Kansas City, Missouri. He graduated from William Chrisman High School in 2007. Madisen’s journey to become a musician, was “melodically passed down” through the songs of his mother. In 2012 Madisen Ward and “The Mama Bear” Ruth Ward recorded and released their EP, “We Burned The Cane Field” which we included in our series the 2013 Best Recordings of 2013.

Madisen Ward and the Mama Bear will be headlining a benefit for Me Like Bees (who’ll play the Vans Warped Tour). The benefit is called, We Like Bees, Saturday, July 12, at 6:00pm, at the Ganesha Theatre, 2331 E 7th St, Joplin, Missouri. The lineup also includes: Of Course Not, Sardis, Social Sinners, Sun Hands, None The Wiser, and Robert Cooper.

Your duo is a rare and special combination of mother and son. How did you come to from the band and tell us about the origins of your name?

Madisen’s journey to become a musician, was “melodically passed down” through the songs of his mother. 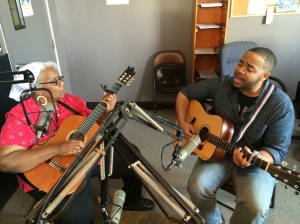 Joel Nanos, of Element Recording who worked with Madisen Ward and the Mama Bear on “We Burned The Cane Field.”

Madisen Ward and the Mama Bear who will be headlining a benefit for Me Like Bees (who’ll play the Vans Warped Tour). The benefit is called, We Like Bees, Saturday, July 12, at 6:00pm, at the Ganesha Theatre, 2331 E 7th St, Joplin, Missouri.

14. Belle and Sebastian – “There’s Too Much Love”
from: Fold Your Hands Child You Walk Like a Peasant / Matador / Jue 6, 2000
[4th full length recording from indie pop band formed in Glasgow in January 1996. They are often compared with The Smiths and Nick Drake. The name “Belle and Sebastian” comes from Belle et Sébastien, a 1965 children’s book by French writer Cécile Aubry later adapted for television. Though consistently lauded by critics, Belle & Sebastian’s “wistful pop” has enjoyed only limited commercial success. After releasing a number of albums and EPs on Jeepster Records, they are now signed to Rough Trade Records in the United Kingdom and Matador Records in the United States. The track There’s Too Much Love was featured in the premiere trailer for the 2014 Brazilian film The Way He Looks and it is also featured in the film’s soundtrack.]