4. Jen Harris – “Fortress feat. Mirina Landry”
from: Flaunting Her Mediocrity / Independent / To Be Released in Summer 2016

Kansas City based poet & spoken word artist, Jen Harris, joins us to talk about her first book of original poetry, SLAMMED, released through Prospero’s Books and Spartan Press as part of the POP POETRY series, #12poetsin12months. This is the second book of this series. Jen Harris will also share selected tracks from her new studio recordings for her debut CD to be released later this year.

Jen Harris will read from her book for the SLAMMED, POP POETRY Book Release, Saturday, February 27, at Prospero’s Books, 1800 W. 39th St, KCMO, with the PIT Poetry Open Mic hosted by Jason Ryberg from 7:00 to 8:00 pm. At 8:30 pm, Jen Harris takes the stage for a special reading with guests performers. More info at: https://www.facebook.com/poetjenharris.

5. Jen Harris – “Education feat. Ryan Wilks”
from: Flaunting Her Mediocrity / Independent / To Be Released in Summer 2016

Jen Harris will have a special release for her new book of poetry, SLAMMED, is Saturday, February 27, at Prospero’s Books, 1800 W. 39th St, KCMO, with the PIT Poetry Open Mic hosted by Jason Ryberg from 7:00 to 8:00 pm. At 8:30 pm, Jen Harris takes the stage for a special reading with guests performers. More info at: https://www.facebook.com/poetjenharris. 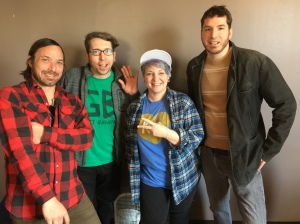 Joining us with more information is founder of Be/Non Brodie Rush, and longtime member of the band, John Huff, and founder of Haymaker Records, Brenton Cook.

In 1996, Brodie Rush and his rock band Be/Non recorded two sets of songs in a small home studio in Lawrence, Kansas – material that would become their first two EPs released on cassette. 20 years later and with a rotating cast of band members, Be/Non is still at it and proud to present the release Mystic Sunrise / Sunset Magic. Recorded over the course of six years in Brodie Rush’s home studio, the album features Be/Non family old and new performing compelling songs that incorporate pop elements into synth-drenched space rock.

A musical direction unlike all previous endeavors, Mystic Sunrise / Sunset Magic is a meditative album based on deep thought and cosmic oneness. It’s a one-two punch into the unknown with intuitive trajectory, a must-listen for those with a bucket-list for the bizarre.

The vinyl is pressed in limited edition purple blob vinyl with digital download included. It is the fifth vinyl release for Haymaker Records.

The show on February 28th will feature Be/Non playing the new album in its entirety, rotating in musicians who assisted in its creation.

The Kansas City Scottish Rite was chosen as a location for the event out of a curiosity surrounding the Masonic temple itself that will undoubtedly compliment the music and viewing experience. Built in 1928 and featuring classic Greek design inspired by the ancient mausoleum at Halicarnassus in Caria, the temple has a rich history in Kansas City but little in the way of public music performances.

Christian Hankel will be handling stage production for the event and Kansas City catering company Cool Guy Foods will provide catered small bites. Copies of the new vinyl record will be available to the public for the first time at this event. Advanced tickets may be purchased online at haymakerrecords.net

[Katy Guillen & the Girls play Knuckleheads on Friday, February 26 with The Grisly Hand]

11. Berwanger – “Her Crystal Room”
from: Demonios [EP] / High Dive Records / December 11, 2015
[On September 2, 2015 it was announced that Josh Berwanger band was signed to High Dive Records. Recorded at Element Recording with producer Doug Boehm. The current line up includes: Josh Berwanger, Ricky Salthouse, and Brian Klien. Josh Berwanger was previously in The Anniversary, a Kansas band that released, 2000’s Designing a Nervous Breakdown & 2002’s Your Majesty and sold over 100,000 records before breaking up on tour in Japan. Berwanger put together a new band, The Only Children, and released, 2004’s Change of Living & 2007’s Keeper of Youth. When Keeper of Touth ended Josh Berwanger took a break and became a high school basketball coach. In the 2012 Josh formed the Josh Berwanger band. Josh Berwanger recently recorded a 7 ” Split Single with Dwight Twilley for Good Land Records. In September the band went on the road as Berwanger, opening for Get Up Kids, and in October opening for Boys Life.]

Sondra Freeman is Director of Promotions and Artist Relations for Midwest Music Foundation, a nonprofit created to support music and musicians in Kansas City and the surrounding areas, founded in 2008 by a collective of musicians and music lovers. The Midwest Music Foundation (MMF) unites and empowers the greater Kansas City music community by providing programs and resources to area musicians through outreach, support, education, and health care opportunities. Sondra is instrumental in MMF’s annual events: Apocalypse Meow, MidCoast Takeover and the MidCoast Takeover fundraiser shows, as well as many other collaborative musical events and fundraisers.

February 27, at The Tank Room, with Chris Meck & The Guilty Birds, Berwanger, Violet & the Undercurrents, and TBA.

March 12, at The Brick with Amy Farrand & The Like, Kangaroo Knife Fight, Kodascope, and The Invisible World.

Sondra Freeman is also the Host & Producer of Busker’s Banquet, a monthly event, on Tuesday nights, 8:00 pm to Midnight, at The Buffalo Room, 817 Westport Rd. (Located in the back, south entrance of The Westport Flea Market.) The weekly show features “two open mic sessions snuggled around a featured artist.” Email: sistrumenterprises@gmail.com

In 5 days, and 27 hours, I witnessed 41 bands, with a combined total of 116 different musicians, in 16 different venues, presenting their sets of music, to loving audiences, at the Folk Alliance International Conference at The Westin Crown Center. The conference was a very special place, where people of all ages and backgrounds, are sharing space with musicians, musical legends, and music lovers from all over the world. I had the opportunity to talk with musicians and folk from Montreal, New Zealand, New Orleans, Toronto, Tulsa, Columbus, Edinburgh, Pennsylvania, Kyoto, Boston, San Francisco, Nashville, Baltimore and beyond. It is glorious gift of music and great spirit.

You can see our photos at: http://www.facebook.com/WednesdayMidDayMedleyon90.1FM/ 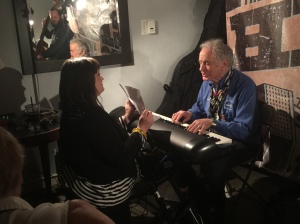 On Friday night of the Folk Alliance International, I was in the Rural Grit presents Here’s to The Roots Private Showcase Room 655, I had just watched Betse & Clarke perform their set, and then watched musical legend David Amram play his hour of jamming with an unknown accordion player, 10 year old Noah, and bassist Rick Willoughby. Just when it seemed he was ready to jam with Victor & Penny, David Amram called folk singer Freebo out of the crowd to sing his song about Dogs from his latest album “If Not Now When.”

Our friend, Pat Fischer interviewed Freebo, in a conversation recorded on Tuesday, February 23, 2016

Freebo is Daniel Friedberg is a bass and tuba player, guitarist, singer, songwriter, and producer noted primarily for his work with Bonnie Raitt. He is also a session musician who has recorded and performed with Ringo Starr, John Mayall, John Hall, Aaron Neville, Dr. John, Willy DeVille, Crosby, Stills & Nash. His long collaboration with Raitt began when he attracted Raitt’s attention as a member of Philadelphia’s Edison Electric Band in the 1960s. In recent years, he has recorded four solo albums: The End Of The Beginning (1999), Dog People (2002), Before The Separation (2006), and Something to Believe (2011)]

11:41 – Interview with The Jellyman’s Daughter

The Jellyman’s Daughter and Calvin Arsenia

On the tragic news of David Bowie’s death, January 11, 2016, our friends in the duo The Jellyman’s Daughter, in Edinburgh, Scotland, called up 21 of their friends, and in an all night session, recorded a tribute to Bowie, with a special version of the Bowie classic, “Young Americans.”