2. Lucius – “Born Again Teen (Music From The Showtime Orig. Series “Roadies”/ Live)”
from: Roadies (Music From Showtime Orig. Series – Season 1) / Republic Rec. / Aug 26, 2016
[Live television version. The original recorded version of this song is on the latest Lucius album, Good Grief, on Mom + Pop Records, released March 11, 2016. Lucius is a five piece indie pop band from Brooklyn, New York. The band consists of Jess Wolfe on lead vocals and synth, Holly Laessig on lead vocals and keys, Dan Molad on drums and vocals, Peter Lalish on guitar and vocals, and Andrew Burri on guitar, drums & vocals. The band formed in 2005 when Jess Wolfe and Holly Laessig met while attending Berklee School of Music. After becoming friends together and casually singing under the name Lucius, they moved to Brooklyn to develop their careers. In Brooklyn, the two moved into an old Victorian home that had a 60-year-old recording studio and music school. Eventually, they met the other members of the current group. Good Grief was recorded over the span of two years while Wolfe and Laessig were touring the group’s first album. Lucius largely departed from the sound of its first album and instead focused their sound on “moody Eighties-synth melodies and raw lyrics about the hardships of marriage.]

3. Schwervon! – “Flaming Dragon Fly”
from: Broken Teeth / Haymaker Records / Sept. 30, 2014
[Nan plays drums & Matt plays guitar, they both sing. They lived in NYC for 15 years and relocated to KC several years ago and Kansas City is all the better for their participation in our community.]

[Katy Guillen & Claire Adams have an acoustic side project called, Quirk & Ruckus, that play Ça Va at 4149 Pennsylvania Ave, on Thurs, September 1, at 9:00 pm. and pn Thursdays through September.]

5. Thom Hoskins – “Still Feeling Bronze”
from: Still Feeling Bronze [EP] / Independent / April 7, 2012
[Former lead singer and guitarist for The Buffalo Saints, Singer/songwriter, Thom Hoskins has been playing in the KC music scene for 10 years as a solo artist, and in the bands: The Belles, Blackpool Lights, and Hidden Pictures. Balancing music with marriage and two children, Thom Hoskins wrote, recorded and pressed his four song E.P. Still Feeling Bronze in his home studio. Hoskins is working to release a follow up full-length record. Also balancing being a student working on a Bachelor of Arts degree in music composition.]

7. Kelley Hunt – “The Beautiful Bones”
rom: The Beautiful Bones / 88 Records / May 20, 2014 [Kelley Hunt’s acclaimed albums have reached the top ten of the Billboard Blues Charts, she has toured all over the world, and has performed six times on A Prairie Home Companion. Born in KC and based in Lawrence, Kelley Hunt is a 2007 recipient of the State of Kansas Governor’s Award for the Arts, and is a 2006 Kansas Music Hall of Fame inductee alongside such artists as Melissa Etheridge, the Byrds’ Gene Clark and Big Joe Turner.]

[Kelley Hunt will be at Collection, at 1532 Grand Blvd, on Wed, Sept 7 at 3:00 pm, with: Jessica Paige & Michelle Bacon, for the KKFI CMF – Soulful Songwriting Workshop & Women in Music Panel.]

As part of our month long Crossroads Music Fest SPOT LIGHT series featuring artists participating in the 12th annual CMF on September 10, we welcome Jessica Paige into our 90.1 FM Studios. Jessica grew up in Kansas, on a farm, and at a very early age discovered her passion fpor music and songwriting. Last year Jessica released her critically acclaimed self produced, debut album, Sweet Nothings, including her single “Beautiful Life.” Jessica has appeared at the Middle of The Map Fest, Folk Alliance International, and American Idol.

Jessica Paige will be featured at Mixtapes & Mixology, Thursday, September 15, at 6:30, at Californos, 4124 Pennsylvania Ave, KCMO with Ivøry Black and others.

Jessica Paige grew up on a farm in Wamego, Kansas, in Pottawatomie County.

11. Marlene Dietrich & Burt Bacharach – “The Boys In the Backroom (Live)”
from: Live In Rio / Stage Door Records / March 7, 1995
[First released in 1959. Written by Frank Loesser, set to music by Frederick Hollander and performed by Marlene Dietrich in the film, Destry Rides Again (1939). It is often referenced as “See What the Boys in the Back Room Will Have”. Her winking performance was a parody of her vampish roles in earlier films such as The Blue Angel (1930) and Blonde Venus (1932). The song became a standard part of her repertoire, second only to “Lili Marlene”. She also sang a German version called “Gib doch den Männern am Stammtisch ihr Gift.” Marlene Dietrich began to record with Capitol in the mid-’60s but retired a decade later, returning only for two roles — one in the 1979 film Just a Gigolo with David Bowie, the other a 1984 documentary name Marlene, with her recorded interviews but no glimpse of the present-day Dietrich.]

[The Philistines play The Crossroads Music Fest, Saturday, September 10, at The Living Room for The Record Machine Showcase with B R O T H E R, Spirit is The Spirit., Westerners, and Various Blonde.]

Originally from Anaheim, California, Ron Megee is a comic genuis of the stage, who has worked at almost every professional theater in Kansas City, including The Kansas City Rep, The Coterie Theatre, New Theatre, The Unicorn Theatre. He is the founder of Late Night Theatre that began in 1997, with performances at Westport Coffee House, The Kemper Museum of Modern Art, and The Old Chelsea, and after a hiatus, was reborn several years ago with a new life at Missie B’s, on West 39th Street with sold out performances for multiple shows including “The Golden Girls Gone Wild,” “Remington Steel Magnolias,” and “The Dykes of Hazzard.” Late Night Theatre has produced over 100 shows in the last 19 years. Ron joins us to share details about Late Night Theatre’s Die Nacht Der Nachte, Night Of Nights Benefit Benefit at The Folly Theater, on Friday, September 9, at 8:00 pm, with The Philistines, Bohemian Cult Revival, Jessica Dressler, Andy Chambers, Chadwick Brooks, Voler Thieves of Flight, Damian Blake, Annie Cherry, Katie Gilchrist, Kita Rose, Jon “Piggy” Cupit, and many more.

Congratulations, to Ron Megee, on Tuesday he got married, to Jon Fulton Adams, in the backyard of their home. The two were actually married 8 years ago, in a special ceremony at The Coterie Theatre, but that was before the US Supreme Court ruled on Marriage Equality, allowing then to be married legally under the law.

I’ve know Ron since 1988, we have watched each other go through this life.

Late Night Theatre, has built their reputation on giving loyal audiences sheer irreverence, and satire, mutually celebrating our pop culture while reinterpreting this culture by rearranging the gender roles and having a good laugh at the absurdity of it all. Witnessing a Late Night Theater production can remind you of the very best moments of sketch comedy shows like The Carol Burnette Show, mixed with the feel of a night club cabaret show, mixed with a high energy LGBTQIA improv troupe, multiplied by the hair and make-up of Rupaul’s Drag Race.

Late Night started in 1997 with early, critically acclaimed shows at Westport Coffee House, and then as the last tenants of the Old Chelsea, before setting up shop for a while at 1531 Grand Ave, until Late Night went dark in 2007. Ron talked about how it all was too much. Dealing with the costs of their space, creating a not-for-profit organization and board, facing rising rent and utilities, keeping it all going while also writing, directing, acting in every show, it became too big of a burden.

While Late Night was dark, Ron continued to direct and perform in independent, original works that could have been Late Night Theatre shows, at La Esquina, The Living Room, The Coterie At Night, while also acting in shows at The Unicorn, New Theatre, and benefit productions for AIDS Walk KC.

Jessica Dressler has built a career playing her popular character Dirty Dorothy at Missy B’s where she organizes most of the live stage entertainment. Jessica is also a gifted actress who with her dear friend and Late Night alumni, Chadwick Brooks, urged Ron to bring Late Night Theatre back to life, and onto the stages at Missy B’s. With the blessings and help from Missy B’s owner, Michael Burns, Late Night Theatre produced The Golden Girls Gone Wild in March 2014 and haven’t stopped since, packing the house each night at 805 W. 39th St., Kansas City Missouri 64111.

Late Night Theatre’s Facebook page describes the theatre company as, “A mystical, mythical theater that is run by a band of misfit actors, techies, drag queens from 1997 to the Future. wild, raw, off the cuff, shows.”

Next year at The Unicorn Theatre, Ron Megee will star in Priscilla Queen of The Desert The Musical, May 31 – June 25, 2017, Co-Directed by Cynthia Levin & Missy Koonce

14. De La Soul – “Pain (feat. Snoop Dogg)”
from: and the Anonymous Nobody… / A.O. I. LLC / August 26, 2016
[First single from the 9th full-length album by American hip hop trio formed in 1987 on Long Island, New York. In early 2015, De La Soul created a Kickstarter in order to fund the album. In under ten hours, it surpassed the projected goal of $110,000. The group is best known for their eclectic sampling, quirky lyrics, and their contributions to the evolution of the jazz rap and alternative hip hop subgenres. The members, Posdnuos, Dave and Maseo formed the group in high school and caught the attention of producer Prince Paul with a demo tape of the song “Plug Tunin'”. With its playful wordplay, innovative sampling, and witty skits, the band’s debut album, 3 Feet High and Rising, has been called “a hip hop masterpiece.”] 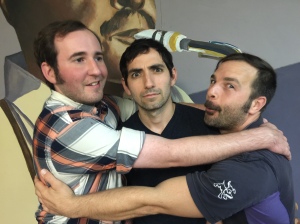 Jorge Arana on guitar, and keyboard, has also played in the band Pixel Panda, and Cliff of Fame.

Josh Enyart on drums, and percussion has also played with Various Blonde, Be Non and assortment of groups… Latin, Maps for Travellers, Pixel Panda, Capture The Flag, Wad, Savitar and more.

Mammoth was Recorded in early 2016 by Justin Wilson at Sound 81 Productions.

Jorge Arana Trio seem to have a mutual understanding and mutual respect with their record label Haymaker Records. Both are young original, Kansas City creations, pushing the boundaries of music. Mammoth is the sixth vinyl release for Haymaker Records

The vinyl is pressed in limited edition silver vinyl.

Mammoth follows the releases of: Oso and Mapache

Josh Enyart spoke to us about how after the band’s fall tour, he will be taking a break from music to go back to school to pursue a career in wind technology.

Jorge Arana, and Jason Nash, Josh Enyart, Thank You for being with us on WMM.

Next week on September 7, we will devote our entire show to the Crossroads Music Fest with special guest co-host Bill Sundahl who is the founder of this festival.. Also joining us will be Chris Haghirian of Ink and Eight On Sixty on The Bridge.