I Formed a Band – The Tom Livesay Story

Tom grew up in Independence, and graduated from Chrisman High School in 1984. 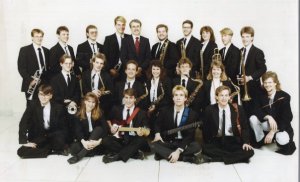 After High School Tom was accepted into William Jewell College in Liberty, MO where her played saxophone in the William Jewell Orchestra & Jazz Band. It was in this band where he met future longtime collaborators: Jeff Brown (trumpet) & Ike Sheldon (trombone).

1987 – 88 Tom formed The Freshman Senators with 3 friends who needed a bass player. Tom sold his saxophone, and bought a bass.

1988 after William Jewell College Tom moved to Midtown, near KCAI, and continued with The Freshman Senators.

1989 Tom formed Wig Newton with Ike Sheldon after Ike graduated and moved to midtown. Wig Newton was influenced by bands of the day: Jane’s Addiction, Faith No More.

1989 to 1991 there was some overlapping between The Freshman Senators, Wig Newton and Knotty Pines. At William Jewel Ike Sheldon had been a vocal music major, in Wig Newton, Ike used his operatic tenor, as well as rapped. We do not have any Wig Newton recordings, but Ike did contribute guest vocals for the Knotty Pines, “Geek Mythology” release, which gives us an example of Ike’s pre-The Wilders vocals.

What happened when Tom Livesay asked Johnny Carson permission to use his name for their “musical project”?

“Thank you for your recent inquiry regarding the use of mr. Carson’s name in your musical project. However, I must inform you that it is in the best interests of Carson Productions to unconditionally refuse permission for the use of the name in any form. To persist in doing so will result in immediate litigation. We wish you luck in the persuit of your project, but must insist in your finding a new name.”

1994 the band changed their name to My Childhood Hero and added drummer Amy Farrand to the group.

In the notes, on the cassette release, it reads “We support, Rhumba Box, Gee Coffee, The Dhurries, Shallow, Trouble in Mind, Secular Theme, Danger Bob, Frogpond, and Shiner.”

1991 (while playing with Young Johnny Carson Story, and My Childhood Hero) Tom also started playing bass with the band Cher fronted by Mike McCoy. Tom played with the band on two cassette releases: “By Named Sue” (1991) and “The Gambler” (1992).

Raucous life shows, sometimes hostile audiences, it was during a Halloween show when 3 of the 4 members quit and walked off stage, in the middle of the set, leaving Mike McCoy alone on stage. Mike eventually reformed the group with Lisa McKenzie on Drums, and Heather Grehan on Bass, and renamed the band Cher UK and rerecorded many of the songs from the two cassette releases, in Minneapolis, for the 1993 release on Red Decibel Records, “She’s A Weird Little Snack.”

1995 – 96 Tom formed, Foolish Sad Robot with Ike Sheldon, Tom’s 8th band in 8 years. With Ike, at least 23 songs were recorded. The band played in many venues & developed a following.

1993-95 The Dhurries, formed with Betse Ellis on Violin, and Phil Wade on sitar, drums, & guitar. Phil was into East Indian ragas. The Dhurries played local coffeehouses including Whistler’s Mother in Westport where they became fans of the Young Johnny Carson Story and Foolish Sad Robot. Tom Livesay, Ike Sheldon, Jeff Brown, Betse Ellis and Phil Wade played together a lot in those days.

11. The Dhurries – “Red Ribbon”
from: Yeppers / Barry Lee Compilation for KKFI / 1995
[Betse Ellis & Phil Wade. Originally recorded on Barry Lee‘s radio program, “Signal To Noise,” in 1995. On a Signal To Noise radio show Ike Sheldon joined Betse & Phil to play a “string tune” they’d been experimenting with after Ike started playing his father’s old country records. Some say this was the beginning of The Wilders. A You Tube video of Ike, Betse & Phil on Signal to Noise is on our Wednesday MidDay Medley Facebook Page.]

“I Formed A Band – The Tom Livesay Story.” continues…
A chronicle of the musical history of Tom’s life, through every band he has played in, over the past 24 years.

1997 -1998 Tom moved to Arizona with a friend. While in Arizona Tom recorded some solo recordings using casio keyboards.

1999 Tom Livesay moved back to KC from Arizona and joined: Snakebite Orphans with Mark Stevenson, Marco Pascolini (of Mr. Marco’s V-7), and Matt Brawl (of Sandoval).

1999 Tom Livesay engineered the recording of The Wilders 2000 release: “The Wilders.” 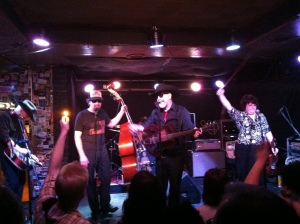 (Note: In 2011 After 15 years, 10 albums, and constant touring, The Wilders announced last month that they would be taking an extended “hiatus.”)

17. The Whittlers – “Stuck in Missouri With You”
from: Touch The Artist / Independent / Summer 2002
[Album was made up entirely of covers. This song was made famous by Stealer’s Wheel. Jeff Brown played drums on several tracks. Ike Sheldon played piano and keyboards on several tracks.]

18. The Whittlers – “Another Night Gone”
from: Nobody’s Happy / Independent / Summer 2004
[written by Betse Ellis. Tom on Vocals, Ike on Piano, Phil on Guitar. Recorded as a surprise for Betse.]

Recently Tom has been working on new songs.

Sources for Notes: Artist’s websites noted above and wikipedia.org