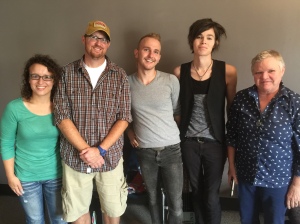 2. Low – “What Part Of Me”
from: Ones and Sixes / Sub Pop Records / September 1, 2015
[11th studio album by Low, indie rock group from Duluth, Minnesota, formed in 1993. As of 2010, the group is composed of founding members Alan Sparhawk (guitar and vocals) and Mimi Parker (drums and vocals), joined by newer addition Steve Garrington (bass guitar). Music writer, Denise Sullivan writes that Parker and Sparhawk’s vocal harmonies are “as chilling as anything Gram and Emmylou ever conspired on—though that’s not to say it’s country-tinged, just straight from the heart.” Ones and Sixes was co-produced by the band and engineer BJ Burton, at Justin Vernon’s April Base Studios in Eau Claire, Wisconsin.]

4. Naomi Shelton & The Gospel Queens – “You Got To Move”
from: Daptone Gold II / Daptone Records / September 18, 2015
[A collection of fan favorites, previously released 45 rpm only, and exclusive new tracks by Naomi Shelton & the Gospel Queens. From Pitchfork.com: Born in the early 1940s, Naomi began performing with her sisters at their small church in Midway, Alabama. After graduating high school and discovering soul music, she moved first to Florida and then to NYC, where she continued singing in church but also held court in Brooklyn nightclubs under the name Naomi Davis. Like many African American singers at the time, her repertoire balanced the secular and the spiritual. Even though her singing career spans half a century, her recording career has been much shorter. In 1999, she and collaborator named Cliff Driver formed a gospel group that attracted the ear of Gabriel Roth. who was running a label called Desco, for which Shelton recorded two sides; when it folded, she signed with his new venture, Daptone Records. She’s been a major presence on that label’s roster, touring the world with the Daptone Super-Soul Revue and singing with the Sugarman 3. Never quite as popular or as prolific as Sharon Jones (who is Daptone’s flagship act), Shelton has proved a powerful vocalist and performer even into her 70s. In 2009, she finally released her debut full-length for the label, What Have You Done, My Brother?, which closed with a soul-stirring cover of Sam Cooke’s “A Change Is Gonna Come”. Five years later, she finally followed it up with 2014’s Cold World.]

5. The Grisly Hand – “Regrets on Parting”
from: Flesh & Gold / Independent / October 2, 2015
[The songs on Flesh & Gold are part of a double LP to be released in 2016. The band spent a year with Joel Nanos at Element Recording, and decided to split the songs between two CD/digital releases. The second half will be released in 2016, along with the LP. The album is the first with the newest member, Dan Loftus on bass, keyboards & vocals, joining Jimmy Fitzner on guitar & vocals, Lauren Krum on vocals & percussion, Matt Richey on drums, Mike Stover on steel guitar, bass & vocals, Ben Summers on guitar, vocals & mandolin. “Regrets On Parting” features: Rich Wheeler on tenor saxophone, Nick Howell on trumpet, and Mike Walker on trombone.]

[The Grisly Hand plays a CD Release Show on Sat, October 3, at Knuckleheads Saloon, with The Ants.]

6. The Thunderclaps – “So Lonesome”
from: Cookin’ Up a Good Time EP / Independent / October 16, 2014
[Colin Blunt – Drums and Bryce Jones – vocals and Guitar. Bryce works as an English teacher in Salina, KS.]

7. The Matchsellers – “Wake Me, Oh Wake Me”
from: Kosciusko County / Independent / December 27, 2014
[A song they played live on the show on July 22. First full-length original album from The Matchsellers. Classically trained violinist Julie Bates from Kansas City, and a Chicago blues guitarist from Warsaw, Indiana, Andrew Morris. Kosciusko County is a county in Indiana with a town called Warsaw as it’s county seat. Formed in 1836. It was named after the Polish general Tadeusz Kościuszko who served in the American Revolutionary War and then returned to Poland.]

8. Beirut – “No No No”
from: No No No / 4AD / September 11, 2015
[4th studio album from indie folk band Beirut, which was originally the solo musical project of Santa Fe native Zach Condon, and later expanded into a band. Beirut’s music combines indie-rock and world music] 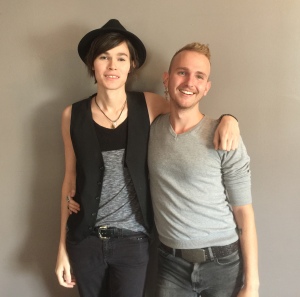 Ivory Black was born in 1986 in Peoria Illinois, as Devin James Miclettet. Adopted at the age of four, it was difficult to find trust in people offering their home to someone denied of it for so long, she had lived with eight different families, before running away at 15, moving from Indiana to Oklahoma and eventually ending up in Seattle. In 2011, after a friend sent a plane ticket, she landed in here in the Kansas City area, and became a part of new family where she was able to have solid ground and over the past several years she has been performing in singer-songwriter showcases and this June released her debut EP, Ready Get Set.

Ivory Black, was last on the show, on May 6.

Ready Get Set was released in June 2015, recorded and mastered by Larry Gann of Awestruck studios, with: Micah Burdick on guitar, Craig Kew on bass, and Lester Estelle, drummer for Kelly Clarkson, on drums for Ivory ‘s EP.

Ivory Black’s dream was made possible by the management skills of Klaartje Van Lue, whom took the opportunity to guide Ivory’s career for the past 4 years.

Klaartje Van Lue is Ivory’s manager and she was the one who helped her find her way to KC. icory has said that she saved her life.

Growing up in a world where music was a way of self expressing oneself and turning to in times of trouble, it was inevitable that Ivory would turn to it when waters were the roughest. “My parents listened to a lot of classics such as Fleetwood Mac, The Beatles, The Bee Gees, The Rolling Stones, and Tom Petty just to name a few”, Ivory has said. One of which, when a child, Ivory almost burned out a Robbie Dupree single “Steal Away’’ due to the catchy rhythms and melody of the song. “I wasn’t really allowed to listen to newer things, ultimately cause of how conventional my parents really were.”

Ivory Black recently released a 7-minute EPK, (Electronic Press Kit) where she addresses her life, running away, coming to KC, and Caroline Gibbs, co-founder of the Transgender Institute.

In an interview with The Pitch KC, Caroline Gibbs said, “Trans people have to live with being objectified a lot. It’s an ugly place to be, and nobody wants to live in that place. The fact that people would be willing to live openly in the face of all kinds of denigration tells me how compelling this urge to live out their true gender really is.”

Ivory black says “People see what they want to see.”

Gender has always been defined as binary — either male or female, Ivory sees herself as “non-binar.”

13. Rachel Mallin & The Wild Type – “Something Wicked”
from: How To Keep Dreaming / The Record Machine / September 10, 2015
[A new compilation series from The Record Machine celebrating the music that is inspiring us with proceeds benefiting Midwest Music Foundation. More info at: http://www.HowToKeepDreaming.com. Rachel Mallin is from Kansas City, MO. At the age of 19 She released her self produced EP The Persistence of Vision In September 2014 The songs were recorded in her basement. In less than a year following her four-track EP’s release, her songs “Razorback” and “Noise of the Night” have been broadcast by on radio stations in Kansas City and nationally. This year Rachel formed a band called The Wild Type, with Justin Walker on bass, Austin Edmisten on drums & voice, and Shaun Crowley on lead guitar. Rachel has shared the stage support of musical acts such as Metric, Panic is Perfect, The Lonely Wild, Pan Astral, and The Architects. In the span of 10 months Rachel’s original songs crawled up from the depths of her basement and reached listeners all around the world. Rachel Mallin and The Wild Type plan to release their first collaborative EP in fall of 2015.]

11:10 – Interview with Nicole Springer and Brad Scott of The Clementines 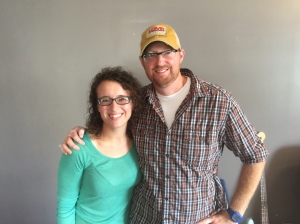 The Clementines are the 2014 Pitch Music Award Winners for Best Folk Ensemble and the 2014 Project Backstage winner for Best Americana Group, but like a lot of area bands their music transcends genre to include alternative rock, blues, jazz, pop, and folk. The Clementines play Carnival, at Memorial Hall, 600 N 7th St, in Downtown KCK, for KCK Business Expo, Tuesday, September 24, featuring 8 bands on 2 stages presented by INK magazine from 3:00 pm – 7:00 PM, with KCKCC Jazz Combo, Poor Bishop Hooper, Maria the Mexican, David George and The Crooked Mile, Blackbird Revue, Not a Planet, and Jessica Paige. More info at: http://www.theclementinesmusic.com/

When we first met The Clementines the band was a duo of Nicole and Tim Jenkins, since then we’ve watch the duo grow to a four piece and the line up with Nicole Springer on vocals & rhythm guitar, Tim Jenkins on lead guitar & mandolin, Aaron Derington on drums & percussion & keyboards, and Brad Scott on bass.

Nicole Springer writes all the lyrics for the songs.

With the creative genus of Tim Jenkins on guitar behind her and a dynamically talented rhythm section, The Clementines perform music that aims to move people. Their sound is demanding and love for the art form undeniable. 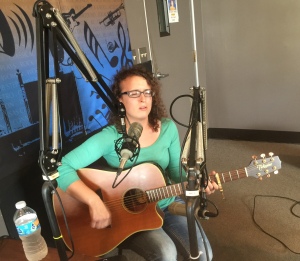 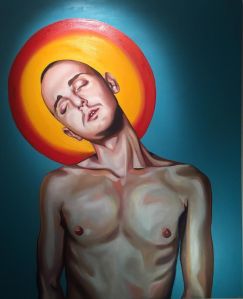 Artist Ryan Wilks recently launched an ambitious KickStarter Campaign to fund his new project called, “Gender Treason,” documenting the various realities of queer persons living in Kansas City through interviews that are being photographed, recorded, transcribed, and painted in oils. Upon completion of each interview Ryan is transcribing key elements, to be printed and framed next to a large scale oil painting created by Ryan of each person interviewed. Ryan will complete at lease 12 portraits and transcribed interviews. The project caught the attention on The Huffington Post who recently featured and interview with Ryan and also featured several of his paintings. You can help to financially support.

For more information on how you can be involved and support this project you can visit: http://www.wilkspainting.com

Ryan explains that “The aspiration of this project is to tell the story of Queer Kansas City, to convey relatable humanity despite vast differences, and to help the public bond with both common and uncommon struggles and victories.”

The Huffington Post became interested in Ryan’s story because as they wrote, “the queer media focuses on the great things going on in big cities, there is far too little attention paid to the smaller communities, many of which are still experiencing serious growing pains.” and that “Kansas City, like many cities in the Midwest, is in the midst of a blossoming of queer art and culture.”

The evolution of Ryan’s Art

Ryan started painting his female friends. It didn’t really have any context to it at all; it took a long time to find my voice in my painting.

Ryan has lived in queer communities in Kansas City, Chicago and San Francisco?

Ryan told Huffington Post: ”I think there are a lot of similarities in the queer culture of Kansas City to both of those places, in that there’s a lot of partying. Generally what I’ve experienced in gay culture has been partying. Especially in the Midwest, bars are one of the few places we as queer people can gather, so a lot of social interactions as gay men take place at a bar. The pride is similar too — the self loathing I experienced as a young man is definitely lifting, especially in San Francisco.”

To see Ryan’s art work you can visit: http://www.wilkspainting.com

Next week on September 30, Nathan Reusch & Alex Ellis of The Record Machine, and Jonathan Bender of Recommended Daily join us to talk about an event that they are curating called CRAFT Saturday, October 3 starting at 10:00am at Crown Center in Kansas City, Missouri