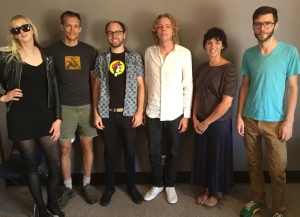 2. My Morning Jacket – “Compound Fracture”
from: The Waterfall / ATO Records / May 4, 2015
[7th studio album. Produced by Tucker Martine and group frontman Jim James. Much of The Waterfall was recorded at a hilltop studio located in Stinson Beach, California, where the band rented seaside homes while recording. James brought unfinished lyrics to the group to create a spontaneous development process. In addition, he suffered a back injury during the sessions that hindered its production. His lyrics document injury, romance and heartbreak, and spirituality, but center most on renewal. The band are supporting the record with a large summer tour, spanning 5 months, featuring appearances at theaters and festivals.]

[The Grisly Hand play Kauffman Stadium TONIGHT, August 12 for the pre-game concert at at 6:00 PM before The Royals play the Detroit Tigers.]

6. Campdogzz – “The Well”
from upcoming release: “Riders In the Hills of Dying Heaven” / Independent / TBA
[Chicago based Mike Price on drums, bass, guitar; Jess Price on vocals, guitar. They left their home in Logan Square, to live in a converted school bus and tour the country. Songwriter, Jess Price, is an Oklahoma native and multi-instrumentalist. Jerad Tomasino is playing bass for Campdogzz on their big tour through September. The band is stopping and camping in some of the most beautiful places across the country.. Jerod created an Instagram account @JeradTomasino to document the tour and nature spots as well as create material for their debut album artwork for upcoming album.]

[Campdogzz will be playing FOKL on August 13 with She’s A Keeper.]

7. Gillian Welch – “Elvis Presley Blues”
from: Revelator / Acony Records / July 31, 2001 [3rd full length album by Gillian Welch. All songs were written by Welch together with David Rawlings and were recorded in Nashville, Tennessee.] 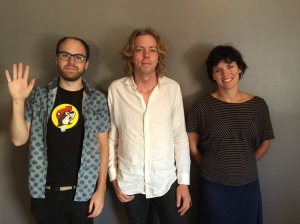 Artist-musician Sterling Witt, returns to the airwaves to share music from his new album Satyagraha, recorded with legendary producer Steve Albini in Chicago. Also joining us is Robin Rosenberger of Moondrop Circus, who collaborated with Sterling on his new music video, “Perception Deception, and will perform at Sterling Witt’s Pledge Music Campaign Kick Off Concert, Saturday, August 15, at 7:00 pm at The Workhouse – Kansas City Historic Castle, 2001 Vine Street. More info at http://www.sterlingwitt.com

Satyagraha, is loosely translated as “insistence on truth” or “holding on to truth” (satya “truth”; agraha “insistence”), a particular philosophy and practice within the nonviolent resistance or civil resistance. The term satyagraha was coined and developed by Mahatma Gandhi. He deployed satyagraha in the Indian independence movement. Satyagraha theory influenced Nelson Mandela’s struggle in South Africa under apartheid, Martin Luther King, Jr.’s campaigns during the Civil Rights Movement in the United States, and many other social justice and similar movements.

We just played “Perception Deception.” For this song Sterling created a new music video in collaboration with Robin Rosenberger and Moondrop Circus. The video will be part of the Pledge Music Campaign.

​On August 15th Sterling Witt is launching a Pledge Music campaign for his new album Satyagraha, which contains 13 new songs, produced by legendary Steve Albini who has worked with everyone, including: Jimmy Page, Robert Plant, Nirvana, PJ Harvey, Sparkle Horse. Satyagraha was recorded at his studio, Electrical Audio in Chicago IL.

Satyagraha was recorded and mixed in 4 days March 28th-31st, 2015. The songs are completely finished and ready. This pre-order Pledge Music campaign is to raise funding to pay for the first run of vinyl, CD’s and merchandise. Any funding over 100% received will go toward our up-and-coming European tour.

10. Sterling Witt – “Who Do You Listen To”
from: Satyagraha / Grand River Records / to be released digitally in late October, 2015
[Produced by Albini in Chicago. Sterling Witt on vocals & guitar, Davy Langerak on bass, Jesse Gilpin on drums.] 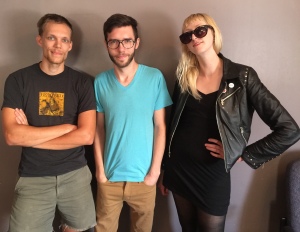 Britt Adair plays lead guitar for the band The Bad Idea’s. She organizes bands and shows and tours, She works at Josey Records, The Riot Room, she is an artist and filmmaker and huge nuturer of Kansas City Punk Music Scene. Britt joins us today to talk about Summer Kamp Fest II. Three Nights! Friday, August 14 at miniBar, Saturday, August 15 at Harling’s Upstairs, and Sunday, August 16, at FOKL.

Britt Adair with us one year ago, talking about Summer Kamp Camp Fest I. Last year, the entire event was held at 3740 Broadway Blvd, KCMO a bar formally known as Vandals. After Vandals was sold Britt needed to find a new home for Summer Kamp Fest.

Like last year, Britt has reached out to bring in bands from outside of KC with musicians coming in from: Springfield, Lawrence, Minneapolis, Arkansas, Little Rock, Nashville. 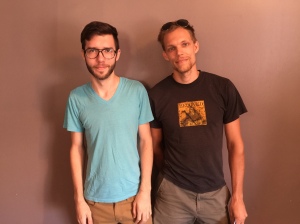 Ryan Lee Toms & Jonathan Thatch, are members of KC based, HMPH! a two-piece math-rock band infusing drums, guitar, looping pedal and effects, to create a huge booming beautiful, complex sound of patterns and riffs and melody. Their debut full-length “Headrush” was released on limited edition cassette in April. Haymaker Records will release “Headrush” on Vinyl with a Release Party Friday, August 21 at 9:30pm, at Harling’s Upstairs in KCMO, with Rhunes & Arc Flash. More info at: http://haymakerrecords.net/hmph.

Ryan Lee Toms and Jonathan Thatch wrote all the music.

The band’s debut was recorded by Dedric Moore of Monta at Odds.

Ryan Lee Toms is also known for his musical recordings as RLT, an experimental / Dance / Electronic Band consisting of Ryan Lee Toms and John Bersuch, recording on RUSTY RECORDS with: Loop heavy electronic psych-rock with intense rhythmic backgrounds. RLT relies heavily on spastic electronic loops and intense drum rhythm. At times it can sound swirly and fun and others dark and gritty, all while driving a complex under rhythm that can change frantically. RLT is a long ever changing project.

One of Ryan’s earlier videos for RLT was filmed by our earlier guest, Britt Adair.

RLT has a new record coming out soon.

Jonathan Thatch is also a drummer for Michael Beers Band.

Jonathan has also worked at Farm To Market Bread Co.

Jonathan Thatch is also a farmer and garden at Shade Tree Collective, an urban farm on 33rd Street with his wife Rachel Hogan

[The AM Trio play The Raphael Hotel on The Plaza, Sat, Aug 15, from 4 to 7pm with Mambo DeLeon]

Next week on August 19, we’ll talk with members of Shades of Jade about their new single “That One” that will be released on August 20. We’ll also talk with David George about “Radiant Man” the new full length David George and A Crooked Mile record, to be released in a special show, August 22 at recordBar. Also next week, musician Lauren Anderson joins us to talk about her debut full length record, “Truly Me” and the Release Party at Knuckleheads Saloon, Thursday, August 27, at 8:30 pm.