1. Parquet Courts – “Stoned and Starving”
from: Light Up Gold / What’s Your Rupture? / Jan. 14, 2013
[American punk rock band based in Brooklyn, New York, that formed in late 2010. The band consists of Andrew Savage (lead vocals, guitar), Austin Brown (guitar), Sean Yeaton (bass), and Andrew’s brother Max Savage (drums). The band released their debut album, American Specialties, on a limited cassette release (later released on LP by Play Pinball! Records). This was followed by the full length album, Light Up Gold, which was initially released on Savage’s Dull Tools label and later reissued on What’s Your Rupture? in 2013. Light Up Gold received acclaim in both the DIY underground and mainstream rock press.]

[Beautiful Bodies CD Release Show, for their EP “Battles” is Saturday, July 20 at The Riot Room with Strive and Grenadina. Beautiful Bodies are also on tour with the Vans Warped Tour 2013, playing KC, Tuesday, at Cricket/Sandstone Amphitheater. More information at thebeautifulbodies.com. ]

10:18 – Interview with Alicia Solombrino and Thomas Becker of Beautiful Bodies

Beautiful Bodies CD Release Show, for their EP “Battles” is Sat, July 20 at The Riot Room.

Songs for Battles were recorded in LA with multi-platinum selling producer John Feldmann who has worked with The Used, Panic at the Disco, Good Charlotte, and Neon Trees.

Alicia Solombrino was born and raised in Kansas City and Alicia explained that moment when she knew that she wanted to be a performer. It was when she was in kindergarten. “I saw Madonna on the (1990) MTV (Video Music) Awards performing Vogue,” she said.

Along with being lead singer, Alicia is also known as a videographer, director, photographer, promotions manager, and web designer, she has been able to put her talents to use in many different ways and with many different venues working with many bands including The Republic Tigers and Alacartoona.

Guitarist Thomas Becker, is a Harvard Law graduate. he has been working representing victims of a Bolivian massacre in a civil lawsuit against the country’s former president.

Beautiful Bodies have been playing and touring since 2005, sharing the stage with bands such as Nine Inch Nails, Smashing Pumpkins, the Yeah Yeah Yeahs, Shiny Toy Guns, My Chemical Romance, Cake, Har Mar Superstar. What are your favorite experiences?

Beautiful Bodies CD Release Show, for their EP “Battles” is Saturday, July 20 at The Riot Room with Strive and Grenadina. Beautiful Bodies are also on tour with the Vans Warped Tour 2013, playing KC, Tuesday, at Cricket/Sandstone Amphitheater. More information at thebeautifulbodies.com.

5. Janelle Monae – “Dance Apocalyptic”
from: The Electric Lady / Bad Boy Records / September 10, 2013
[Janelle Monáe moved from Kansas City, Kansas to New York to study theatre at the American Musical and Dramatic Academy. Her original plan was to pursue a career on Broadway, but she soon changed her mind and returned to music. After moving to Atlanta, GA, where she met OutKast’s Big Boi, Monáe founded the Wondaland Arts Society with like-minded young artists and made appearances on Outcast’s Idlewild, where Janelle is featured on the songs “Call The Law” and “In Your Dreams”. In 2007, Monáe released her first solo work, titled Metropolis. A few months later she was signed to Sean “Diddy” Combs’ label, Bad Boy Records.]

Poet, Writer, Teacher, Scholar, Crystal Boson, is a PhD student in American Studies at the University of Kansas. Crystal holds both a B.A and M.A in English Literature, from the University of Missouri and Texas A&M University. Crystal’s recent poetry collection: “The Queer Texas Prayerbook,” was released by Seven Kitchens Press, Her previous work has been published in Callaloo, Pank, the Black Bottom, and in an anthology of Queer Midwestern Writers. She also has a chapbook, “The Icarus Series’ , with Seven Kitchens Press. Crystal currently lives in Lawrence Kansas, with her macbook, a basil plant named Lazarus and her cat, Delphina Jenkins Boson-Lease III.

Crystal Boson is currently living in Lawrence, working on her PhD at the University of Kansas.

One of the subjects Crystal is researching and studying is Hoodoo.

(from wikipedia) “Also known as conjure, and “Voodoo” (which strictly speaking is different in many ways) is a traditional African-American folk spirituality that developed from a number of West African, Native American, and European spiritual traditions. Hoodoo has some spiritual principles and practices similar to spiritual folkways in Haitian, Cuban, Jamaican, and New Orleans traditions. Hoodoo seems to have evolved in the Mississippi Delta where the concentration of slaves had been dense. Hoodoo then spread throughout the Southeast as well as North along the Mississippi as African Americans left the Delta beginning in the 1930s.”

While living there she was stopped for “driving while black” 98 times in four years.

Crystal is now working on new poems for a series called: Kansas Up South.

In Missouri and Kansas, and perhaps in our entire country, our society doesn’t really like to discuss issues of race and our history of slavery and discrimination. Crystal never shys away from dealing with these themes in her original works.

This past Saturday evening, the verdict came from the jury in Sanford, Florida, and George Zimmerman was found not guilty of charges, after he killed unarmed, 17 year-old Trayvon Martin, who was walking home to his dad’s house. The judge would not allow the issue of race to be part of the trial, but cases like these always seem to crack open the truth about where people really stand on issues of race. Crystal described her own observations about this trial and verdict.

Being identified as Queer, African American, Female, these identities have historically been used to hold a person back, to deny them equality, even offer that person violence and hate. Crystal has been writing about her own experiences, and her own first hand racial profiling experiences. 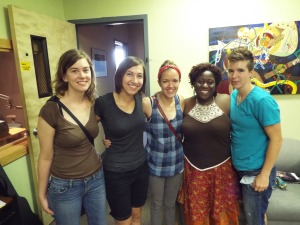 6. Mavis Staples – “I Like the Things About Me”
from: One True Vine / Anti Records / June 21, 2013 [Staple’s 13th studio album, 2nd collaboration with record producer and Wilco frontman Jeff Tweedy. Their 2010 collaboration, “You Are Not Alone” won a Grammy in the category of Best Americana Album. Tweedy also played most of the instruments on the album, with the exception of the drums, which were played by his son, Spencer Tweedy. The album was recorded at the Wilco Loft in Chicago, and while working on it, Staples commuted back and forth between the Loft (on Chicago’s North Side) and her home on Chicago’s South Side.]

7. Michael Franti & Spearhead – “I’m Alive (Life Sounds Like)”
from: All People (Deluxe) / Boo Boo Wax – Capitol / July 30, 2013
[Michael Franti was born April 21, 1966. He is an American poet, musician, and composer. He is the creator and lead vocalist of Michael Franti & Spearhead, a band that blends hip hop with a variety of other styles including funk, reggae, jazz, folk, and rock. He is also an outspoken supporter for a wide spectrum of peace and social justice issues.]

8. Daughn Gibson – “Mad Ocean”
from: Me Moan / Sub Pop / July 9, 2013
[Carlisle, Pennsylvania based singer/songwriter, was formerly the drummer for the band Pearls and Brass. His debut solo album “All Hell” received such critical acclaim that Sub Pop records signed Gibson.]

9. Me Like Bees – “Naked Trees”
from: The Ides / LoveWay Records / July 9, 2013
[indie/alternative rock band from Joplin, Missouri consisting of: Pete Burton (lead guitar), Asher Poindexter (bass), Luke Sheafer (vocals/guitar), and Tim Cote on drums. Formed in May of 2009, the group has developed their sound with influences from bands such as Modest Mouse, Arcade Fire and The White Stripes.
More info at: melikebees.com.]

[Erik Voeks plays the Uptown Arts Bar, Saturday, July 20 at 7:00 opening for The Depth and The Whisper. Erik joins Albert Bickley, Dave Tanner, and Kelsey Cook of The Depth and The Whisper on lead guitar, for this show, and he joins the band on tour in a string of out-of-town shows, including the band’s return to New York City and shows in Des Moines, Chicago, Canton, Boston, and Cincinnati.]

Kansas City based singer, songwriter, and musician, Claire Adams, is an integral part of multiple area bands including: Claire & The Crowded Stage, Appropriate Grammar, Hidden Pictures, The Katy Guillen Trio, and Quirk & Ruckus. Claire Adams grew up in Topeka and went to college in Nashville. Claire & The Crowded Stage is set to release their third EP, “Nightside of Day” with a special EP Release Show, this Saturday, July 20 at 9:00 pm, at the recordBar, 1020 Westport Road in Kansas City, Missouri, with special guests: Tenderness Wilderness, Appropriate Grammar, and Aly Peeler.

We talked again with Claire about how one of the reasons she ended up being in so many bands, and in the middle of a crowded stage, is because when she first moved to KC three years ago she wanted to make friends.

Claire grew up in a small farming town in Kansas, went to High School in Topeka, went to college in Nashville. You lived in Nashville for 7 years before coming to KC.

Among members of Claire & The Crowded Stage, many other bands are represented including: The B’Dinas (Peter, Katy, Katelyn), Dream Wolf (Katelyn, Brent), The Katy Guillen Trio (Katy, Stephanie, Claire), Quick & Ruckus (Katy, Claire), Genessee (Jerod), Appropriate Grammar (Claire), Hidden Pictures (Claire), The Cave Girls (Stephanie), I Found A Job (Peter), with all of you switching around on keyboards, bass, drums, guitar, lead vocals. How many bands can one person be a part of before losong control?

The song “Night Side of Day” was Performed LIVE by half of The Crowded Stage: Claire Adams, Katy Guillen, Peter Lawless, & Teri Quinn, back on March 27 on this show.

Claire, Katy and Teri talked about how the new EP is more representative to the real sound of “The Crowded Stage.”

14. La Guerre – “Ontario Lake”
from: The Three / The Record Machine / May 7, 2013
[La Guerre is french for The War. La Guerre is Katlyn Conroy a singer songwriter, based in Lawrence, Kansas and is also a member of Cowboy Indian Bear. Her Transformations Tour comes to KC Thursday Night.]

15. Piney Gir – “Outta Sight”
from: Geronimo! / Highline Records / October 2, 2012
[Piney Gir is Angela Penhaligon a musician and singer, born in Kansas and now based in London, England. This is her 5th album.]

16. Ecstatics – “Hearts Change”
from: 1,000 Years Of Ecstatics / Independent / January 1, 2013
[Brooklyn based duo made up of: Matthew Dunehoo (formerly of Doris Henson and Baby Teardrops) and Lillie Jayne (aka Admiral Grey). Recorded by Duane Trower at Weights and Measures Soundlab in Kansas City, MO. Preliminary mixing by Duane Trower at Weights and Measures Soundlab. Further & final mixing by Erik Schuiten at Headroom Audio in New York City. Mastering for vinyl by Paul Gold at Salt Mastering in Brooklyn, NY. Mastering for digital by Al Houghton and Mike Crehore at Dubway Studios in NYC. ]

[Ecstatics play the recordBar, Thursday, July 18 with Parallels and Akkilles.]