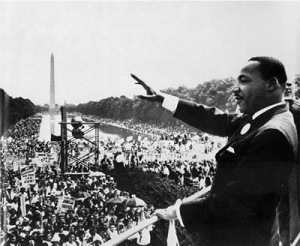 Wednesday MidDay Medley celebrates Dr. Martin Luther King, Jr., born January 15, 1929. Dr. King led the 1955 Montgomery Bus Boycott and helped found the Southern Christian Leadership Conference in 1957, serving as its first president. King’s efforts led to the 1963 March on Washington, where King delivered his “I Have a Dream” speech. In 1964, King became the youngest person to receive the Nobel Peace Prize for his work to end racial segregation and racial discrimination through civil disobedience and other non-violent means. By the time of his death, Dr. King had refocused his efforts on ending poverty and opposing the Vietnam War, both from a religious perspective. Dr. King was assassinated on April 4, 1968, in Memphis, Tennessee. He was posthumously awarded the Presidential Medal of Freedom in 1977 and Congressional Gold Medal in 2004. Martin Luther King, Jr. Day was established as a U.S. national holiday in 198I.

At 11:15 Mark talks with Jennifer McCartney, a retired professional boxer, and single mom, who started Kansas City Heroes in 2015 to advocate for single parents, disabled folk, and the disadvantaged. Kansas City Heroes provides furnishings, food, and essentials to people in need. They have cleaned houses, mowed yards, and provided helpful acts of compassion. Jennifer and her teenage daughter will attend the Women’s March on Washington, January 21, 2017, with over 200,000 women united in solidarity for the protection of rights, safety, health, and families. The rhetoric of the past election cycle has insulted, demonized, and threatened many women, immigrants of all statuses, those with diverse religious faiths particularly Muslim, people who identify as LGBTQIA, Native and Indigenous people, Black and Brown people, people with disabilities, the economically impoverished and survivors of sexual assault. The Women’s March on Washington will send a bold message to our new administration on their first day in office, and to the world that women’s rights are human rights. More info at: http://www.womensmarch.com