At 10:15, Nathan Reusch co-founder of The Record Machine, and the brainchild of INK’s Middle of the Map Fest, April 3 – 5, joins us to talk more about this year’s line-up of musical artists for the festival! We’ll play music from featured bands and headliners of this year’s festival. More info at: http://www.middleofthemapfest.com

At 10:30, Old Sound, the Kansas City based band formed by Greg Herrenbruck, Grady Keller, and Chad Brothers along with their record producer Phil Wade, join us to talk about their debut recording, “Rain Follows The Plow,” recorded and produced by Phil Wade at his studio, Alluvial Fan. 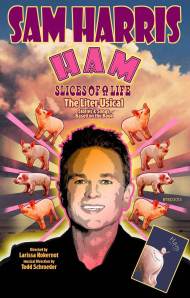 At 11:15 recording artist, actor, and author Sam Harris, joins us live in our 90.1 FM studios. Sam Harris will be on stage at The Folly Theatre, Thursday night, on Feb. 13, at 7:30 pm. Sam will entertain the audience with selections from his new book, “Ham: Slices of a Life,” which was released January of 2014, from Gallery Books, a division of Simon & Schuster. The book has been called “New Yorker-worthy,” by The New York Times, Harris’ 16 humorous stories and essays discuss friendship, celebrity, growing up and getting sober.

After winning STAR SEARCH in its premiere season, Sam Harris and his powerhouse pop, gospel and theater-influenced vocals have never looked back. He is a multi-platinum recording artist with nine full length studio releases. On Broadway, Sam received a Drama Desk nomination for his role in the Tommy Tune-directed revival of GREASE. He was also nominated for a Drama League Award, a Tony Award, an Outer Critic’s Circle Award and a Drama Desk Award for his work in Cy Coleman’s THE LIFE. He’s also appeared on Broadway in Mel Brooks’ THE PRODUCERS, in the national tour of JOSEPH AND THE AMAZING TECHNICOLOR DREAMCOAT and in the musicals JESUS CHRIST SUPERSTAR, CABARET, HAIR and PIPPIN. Currently, Sam is preparing for the long-awaited production of THE BROADWAY MAN, in which he stars as the darkly complex and charismatic Al Jolson.

For ticket info: http://www.follytheatre.org and to reserve a Hardcover of Ham: Slices of a Life: Essays and Stories for at-Event pick-up, call Rainy Day Books at 913-384-3126 or visit: http://www.RainyDayBooks.com