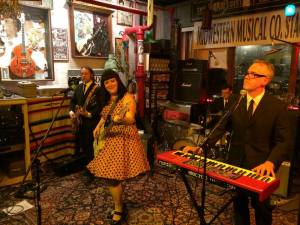 At 10:15 Mark talks with members of The Quivers: Terra Skaggs, Todd Grantham, Bernie Dugan and Desmond Poirier. The band joins us to talk about their new release, “Hot Young Mess” and their Kansas City – CD Release Show, with Schwervon! & The Bad Ideas, Saturday, April 12, at 9:00pm, at The Brick, 1727 McGee, KCMO. More info at: http://www.thequiversband.com/

At 11:15, Jamie Searle of MY BROTHERS & SISTERS, returns to the show to talk about his band’s Album Release Party featuring DJ JOC MAX, Saturday, April 12, at 7:30pm, at The Mission Theatre, 5909 Johnson Drive, Mission, Kansas. More info at: http://www.mybrothersandsistersmusic.com

At 11:00, in our second hour, Bill Sundahl returns to the show as our “Guest DJ”. Bill will reunite with his former band-mate friend Jamie Searle. The two played together in the band It’s Over. Bill is currently playing in The Starhaven Rounders. Bill is also the founder of Spice of Life Productions and organizer of The Crossroads Music Festival and the upcoming Spring Dance, Saturday, May 31, at 7:00 pm, at Knucklehead Saloon, 2715 Rochester, KCMO, featuring: Grand Marquis, Starhaven Rounders, The New Riddim. and MY BROTHERS & SISTERS. More info at: https://www.facebook.com/pages/Spice-of-Life-Productions