3. Blackalicious – “Sports Alphabet”
from: “Sports Alphabet” – Single / OGM Recordings / December 3, 2015
[In late 2015 Blackalicious released a reworked version of their 1999 song, “Alphabet Aerobics,” to provide a theme song for Bleacher Report with an A-Z rap all about sports. Calling it “Sports Alphabet,” Gift of Gab and Chief Xcel keep the backing track and concept the same but squeeze in more than 50 sports references across all 26 letters of the alphabet — from “Alley-alley-alley-alley-oop on amateurs” to “Zero zero zero on the clock, game’s over.”American hip-hop duo from Sacramento, California, made up of rapper Gift of Gab and DJ/producer Chief Xcel. Blackalicious are noted for Gift of Gab’s often tongue-twisting, multisyllabic, complex rhymes and Chief Xcel’s “classic” beats. The duo have released four full-length albums (Nia in 2000, Blazing Arrow in 2002, The Craft in 2005, and Imani Vol. 1 in 2015). Gift of Gab has stated that Imani Vol. 1 will be the first in a three-volume series to be released during the next two years.]

[Blackalicious plays The Bottleneck in Lawrence, KS, on Friday, September 30, with Lushlife.]

Colby Bales & Cody Calhoun are members of the Kansas City 4-piece band, Instant Karma. They join us live in our 90.1 FM Studios to talk about the band’s new music and their show tonight, Wednesday, September 28, opening for C.W. Stoneking, at recordBar, 1520 Grand, Blvd, in Kansas City. Instant Karma describes their sound as “a drug trip through the soul section of your local record store.”

This Spring the band released their latest single, “Make Me A Man,” with Colby Bales on vocals & guitar, Cody Calhoun on guitar, Branden Moser on bass, and Zach Harris on drums.

Colby Bales & Cody Calhoun, thanks for being with us on Wednesday MidDay Medley

Their influences range from The Black Keys to Syl Johnson to the Wu Tang Clan. 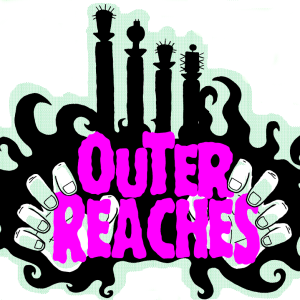 9. The Deep End – “Uke Round”
from: Uke Round – Single track / Independent / Unreleased
[A new musical project from Brandon Draper and Joc Max.] 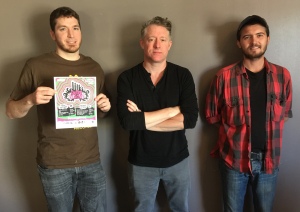 Steve Tulipana studied video, fine arts & painting at UMKC, where he graduated in 1991. A constant collaborator, Steve is a founding member of influential KC bands: Season To Risk, Pornhuskers, Unknown Pleasures, Sie Lieben Maschinen, Roman Numerals, and Thee Water MoccaSins. With Shawn Sherrill, he is co-owner of recordBar and miniBar. After a series of sold out shows packed with loyal patrons who had found a home at this special neighborhood venue, recordBar closed Jan. 2, after 10 years at 1020 Westport Rd. recordBar began presenting pop-up shows at their new location, 1520 Grand, for Middle of The Map Fest, special shows this summer, Crossroads Music Fest, and the Outer Reaches Fest this weekend.

Brenton Cook had already produced 3 volumes of area band compilations for the Midwest Music Foundation called Midwestern Audio, before he formed the Kansas City independent music label, Haymaker Records in January 2014. Since then the label has released 9 full length albums, 2 EP releases, and one 7-inch single, all on vinyl. For the last 4 years, Haymaker Records has also been a co-sponsor & planner of the KC Psych Fest with Dedric Moore of, Monta At Odds and Mysterious Clouds. In this, the 5th year of the Fest, Dedric and Brenton have rebranded Psych Fest with it’s new name: Outer Reaches, with the idea of being more incorporating of music outside of the “psych” genre, that is still pushing the boundaries of music.

Outer Reaches, rebranded from KC Psych Fest this year, emphasizes musical acts experimenting and pushing boundaries within a variety of musical genres. The fest aims to showcase the ‘out there,’ left-of-center, under-the-radar musical acts.

14. Gramps The Vamp – “Things That Go Bump”
from: Gramps the Vamp / Independent / September 2, 2014
[Chicago based Doom Funk band is made up of: Maxx McGathey on keyboards & samples, Kevin Holt on bass, Stevenson Valentor on drums & percussion, Mike Novak on guitar, Peter Gillette on trumpet, Nick Bush on alto sax, and Justin Howe on tenor sax. All music written, arranged and performed by Gramps The Vamp. All voices are sampled from radio theater and film in the public domain (for a complete list of sources please email us). Recorded and mixed by Sergio Rios at Killion Sound in North Hollywood, CA. Mastered by Matthew Barnhart at Chicago Mastering Service. Produced by Gramps The Vamp and Sergio Rios.]

17. The The – “Armageddon Days Are Here (Again)”
from: Mind Bomb / Epic / July 11, 1989
[3rd studio album by The The. For this album, Matt Johnson assembled a genuine band behind him to play the bulk of the instrumentation with Matt Johnson on vocals, guitar, & keyboards; Johnny Marr on guitar & harmonica; James Eller on bass guitar, and David Palmer on drums.]

Zachary Van Benthusen is a musician, actor, model, filmmaker, playwright, scene maker and producer. Fascinated by his dad’s Kiss records hanging on the walls when he was in 1st grade, he dressed up like Kiss guitarist Ace Frehley for halloween. In 2nd grade Zachary dropped out of school as part of an “unschooling” movement. He took guitar lessons with “Fast” Johnny Ricker, and at 9 he served as a guest DJ on 90.1 FM playing The Doors, and Pink Floyd. As a 12 year old he started working with Paul Mesner Puppets while also starting a photography business. When Zach was 16 he was modeling underwear for Late Night Theatre, and at 17 was writing plays with The Coterie Theatre’s Young Playwrights Roundtable. Zachary has worked in film & video. He has collaborated on music & videos for Ssion, with musician & director Cody Critcheloe. Zachary has been a collaborator with Whoop Dee Doo and has worked with the band Nature Boys. For five years Zachary played music with the band, Lazy and produced videos for the band.

Zachary Van Benthusen joins us to share information and music of the legendary Chicago band ONO, who play KC, with Buck Gooter, on Wednesday Night, Sept. 28, at 8:00 PM, at Lindquist Press, 2016 Baltimore, KCMO, presented by Under The Sun Productions.

Zachary Van Benthusen, thanks for being with us today on Wednesday MidDay Medley.

Lazy has released music on multiple record labels, including Chicago’s Moniker Records, the same label that is currently releasing the music of the legendary band ONO.

ONO was formed January 5th, 1980. The band’s 36 year adventure in music have taken them from one of Chicago’s respected pioneers of punk & noise rock in the 1980s, to being recognized by a whole new generation of music lovers, and art students in the new millennium who are searching for original and authentic voices.

Robert Cole Manis founder of Moniker Records said, “ONO transcends the norm: a group who has undergone two periods of activity, first in the ’80’s, and now in the new millennium,” he says “Who does that and achieves notoriety the second time around? It is because ONO is unlike any other act that has graced the staged or hit the record button in the studio. Their mixture of gospel, noise, industrial, performance art, and beautiful madness has never been imitated or copied—they stand alone in a massive world of make-believe art.”

Since their 2007 resurgence, the band has gone on two cross-country tours, and are currently on tour with Buck Gooter, playing Kansas City tonight, before traveling to Texas.

ONO co-founder and composer P. Michael has assembled a beautiful band that conjure up their groves with rich bass lines, electric guitar textures, melodica feedback, and beautiful keyboard playing that would make John Cale proud. The band possesses steadfast and powerful percussion and drums, riffing and jamming, driving the beat, filling the room, giving sonic landscape to Travis and his testimonials in song and spectacle. Travis moves about the band, and into the audience, like an actor in a performance piece, in total control of each onstage costume change. He adorns this band with an elegant beauty, while staying true to punk and performance art pushing and questioning and hugging and flirting with his audience, turning the room into a dance floor-church service-classroom-fashion show. P. Micheal and the ONO band enjoy playing together, creating these amazing pieces that transition from song to song with samples and mixes, in a never ending delivery of sounds and rhythm. 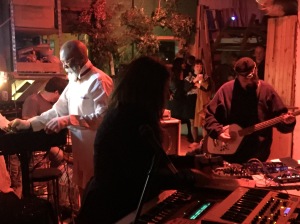 In her profile on ONO for Fields Magazine, writer and photographer Sarah Jane Quillin, wrote about how ONO is fronted by queer Black Vietnam War veteran, punk poet and performance artist, Travis, who was originally from rural Mississippi. She writes: “His performance in ONO serves as catharsis, a way to process past trauma, both his own and that of American historical travesties like Tuskegee and Vietnam, gun violence in present-day Chicago, gender and sexuality issues. To Travis, making noise is as conceptual as it is aesthetic.” Travis told Sarah Jane Quillin, “Travis is not performing, I saw what Black bodies went through in Vietnam, and I live on the south side of Chicago and see what all the people live with there. To America, as a Black body, I am noise.”

ONO, who play KC, with Buck Gooter, on Wednesday Night, Sept. 28, at 8:00 PM, at Lindquist Press, 2016 Baltimore, KCMO, presented by Under The Sun Productions.

Next week, on October 5, we talk with company members of Egads Theatre production of Evil Dead The Musical, running October 13 through October 31, at the H & R Block Stage at Union Station. Also next week Barry Lee and friends join us to talk about the the KKFI Benefit – Beatles Tribute, Saturday, October 8, at 8:00 pm, at Knuckleheads Saloon, 2715 Rochester Street, KCMO. Also next week Betse Ellis and Marion Merritt join us as my co-hosts for the entire show to encourage our listeners to support 90.1 FM KKFI – Kansas City Community Radio during our Fall Fund Drive.