At 10:30 Mark talks with internationally touring singer-songwriter, multi-instrumentalist, and producer Cat Dail, who lives some of the time in New York City and some of the time in Chesterfield, NH. She has released 5 albums on the Lucky Magnet recording label she founded. Cat has been active in the Indie rock scene since the 1990s, leading her NYC band, Cat played a residency at the Bitter End, and most colleges and clubs from Vermont to Virginia, Colorado to California. Cat is returning to her hometown of Kansas City for a special Release Show of her new EP “FIGHT FOR LOVE” at recordBar, 1520 Grand on Tuesday, May 22, at 8:00 pm, with Carswell & Hope. More info at: http://www.catdail.com

At 10:45 Mikal Shapiro joins is to share music and details about her new album, “The Musical II”. Mikal Shapiro is a Kansas City songwriter whose musical influences span popular songs, psych rock, lounge, classic country and old time spirituals. She has toured extensively across the United States and has recorded five critically acclaimed albums. Kansas City Star critic Tim Finn declared her album “The Musical” to be one of his top five releases of 2015. A third generation storyteller, she draws inspiration from her travels, love life, and the state of the Union. Mikal Shapiro plays The Musical II – Album Release Show, Saturday, May 26 at 7:00 PM, at The Buffalo Room, 817 Westport Rd, KCMO with special guest Tina Bilberry on viola and violin. More info at: http://www.mikalshapiro.com

At 11:05 A.M. Merker, Sarah Dolt & Stephen Berry, of the 8-piece KC band, My Oh My!, join us to share tracks for their new full length album release, “THE WAR OUTSIDE.” Their new album is being released on vinyl and was produced by My Oh My! and Joel Nanos, and recorded, engineered, and mixed by Joel Nanos at Element Recording Studios, and mastered by David Gaumé at Forest Sounds, North Hollywood, CA. My Oh My! is: Stephen Berry on guitars; Grant Buell on pianos, Organ, & Wurlitzer; Sarah Dolt, Stephanie Gaumé & Melissa Geffert on vocals; Jason Harper on bass guitar & tenor saxophone; Jacob Horpinjuk on drums & percussion; and A.M. Merker on lead vocals, guitar, and songwriting. My Oh My! play and Album Release Show, Saturday, May 19, at 7:00 pm, at recordBar, 1520 Grand, KCMO, with Brandon Phillips & The Condition, Timbers, and Jake Wells. More info at: http://www.myohmykc.com 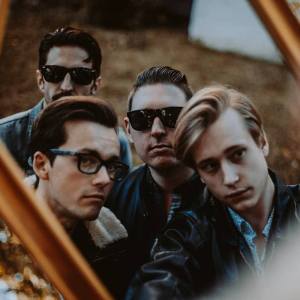 At 11:35 members of the band Instant Karma join us to share their new 7” vinyl single release, “Give Me Freedom” from Sunflower Soul Records. The new music was recorded, mixed, and produced by Chris Hazelton, and mastered by Adam Boose. Instant Karma features Cole Bales on vocals & guitar, Cody Calhoun on guitar, Branden Moser on bass, Zach Harris on drums. Instant Karma bass player Branden Moser has called the band, “a drug trip through the soul section of your local record store.” Instant Karma play SoundMachineKC, Saturday, May 26 at 7:00 PM at recordBar, 1520 Grand, with Dylan Guthrie & the Good Time Guys, and Foshee. More info at: http://www.instantkarmakc.com