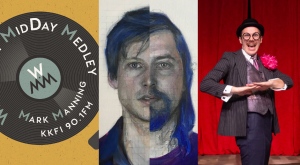 At 11:00 Matthew Dunehoo and Ben Parks join us to talk about the debut release of their new band Slights. The new 11-song album is called Flow State, and was created over the past year. Ben Parks is also visual artist and painter as well as part of the band, Of Tree. Matthew Dunehoo is also a filmmaker and actor, and has been a member of the influential bands: Loose Park, Baby Teardrops, Doris Henson, and The String and Return. Slights play an album release show at recordBar, Friday, November 30, at 8:30 PM, with The Philistines, and Emmaline Twist. More information at http://www.slightsband.com