At 10:30 Chase The Horseman joins us to details about his upcoming show on Thursday, August 16, at 9:00 PM, at miniBar, 3810 Broadway, KCMO, with Gully Boys, Taylor Seaborg, and Robe Rage. Chase the Horseman is a band, film composer, multi-instrumentalist, audio engineer, and producer. He has composed music for over 36 films and as musician has collaborated with Clairaudients, Teri Quinn, Heidi Lynne Gluck, and many more. 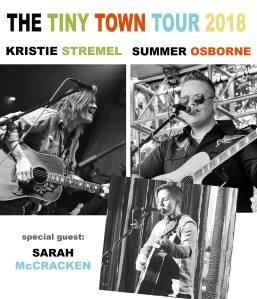 At 11:00 Mark talks with Kristie Stremel, Summer Osborne, and Sarah McCracken who will play LIVE in our 90.1 FM Studios. These three singer songwriters are currently on the road for, The Tiny Town Tour 2018, performing shows in Ellsworth, Wichita, Manhattan, Tonganoxie, Des Moines, Lincoln, and Lawrence.

Described as “Joan Jett & Tom Petty’s love child,” and armed with her guitar, fueled by coffee, and over 75 published songs, singer, songwriter, producer, rock & roll mom, Kristie Stremel has 10 full-length releases in her musical career of over 20 years. She has recorded as a solo artists and also on the bands Frogpond, and The 159ers. In 2015 Kristie released, Wildflowers, a children’s book of songs and poems with an accompanying CD recording inspired by her son Charlie. In 2016 Kristie released the single “Orlando (Keep Dancing).” More info at: http://www.kristiestremel.com

Described as the “love child” of Adele, Carole King, and Joss Stone, Summer Osborne is an award winning singer-songwriter with a charismatic stage presence. Summer’s ninth album, Spiritual Revolution, was released in August of 2015. Summer Osborne first graced the stage at the tender age of four, but has been performing her original tunes for fans since 2005. Summer has played: the National Women’s Music Festival and SXSW, and Pridefests all over North America, and has shared the stage with Holly Near, The Indigo Girls, The Cliks, Crystal Waters, Martha Wash, and Jennifer Holliday. More info at: http://www.summerosborne.com 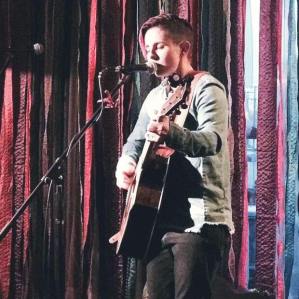 St. Louis, Missouri based singer songwriter, Sarah McCracken has been on tour with Summer Osborne before. She has toured all over the country. Sarah McCracken graduated from Missouri State University in Springfield with a degree in Psychology. She also studied at Goldfarb School of Nursing at Barnes-Jewish College in St. Louis. Sarah McCracken has worked as a case manager for the Center for Urban Community Service in New York City, and as a program manager for St. Louis Arc.